Dick Grayson Family Tree time! Bleeding Cool scooped the goss a while back before it hit the shelves. In last month's Nightwing #81, it was revealed that the new mayor of Bludhaven, Melinda Zucco, the estranged daughter of Tony Zucco, part of the Zucco family of Bludhaven, and seen working for the Marini crime family was actually Dick Grayson's sister. The hows and the whys were up in the air. 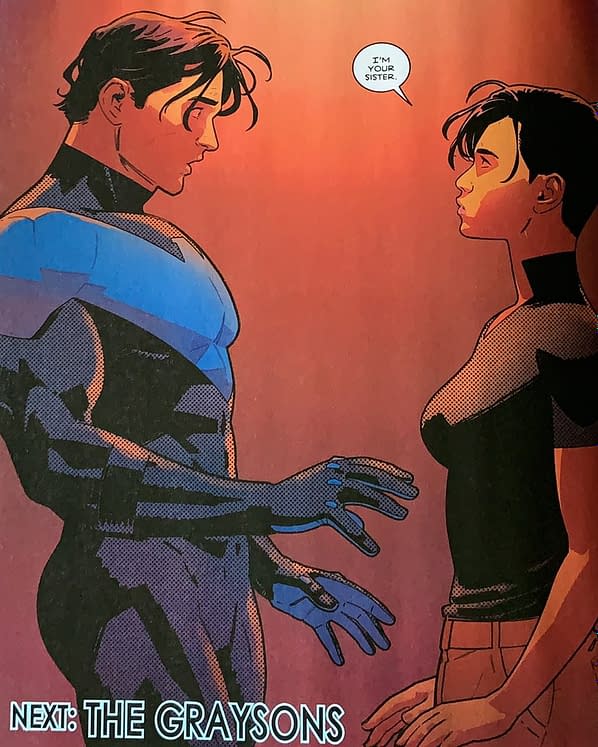 This week in Nightwing #82, she is revealed as the daughter of John Grayson, Dick Grayson's long-lost unknown half-sister, created by Tom Taylor and Bruno Redondo, Mayor Melinda Zucco's only three appearances so far have been Nightwing #78, #79, and #81 with copies of Nightwing #78 now selling on eBay for up to $22. With Nightwing #82 promising to clear this all up. And so it has.

Melinda Zucco's mother, Meili Lin, trafficked into the USA by Tony Zucco, who escaped to stay with the circus while the Flying Graysons were there – but before they were the Flying Graysons and just two trapeze artists, John and Mary, who worked together. Giving a chance for John and Meili to get in there first.

Only for Meili Lin to be kidnapped again before she knew she was pregnant, and for her daughter Melinda to be raised as Tony's own, while the Graysons became… the Graysons. Flying and everything.

But then for Dick Grayson's parents to receive a revenge treatment from Tony based on what he may have suspected. Which ties everything together and gives Dick Grayson a new branch on his Batfamily tree. Will Melinda end up in a cape and cowl like everyone else?