The true feat accomplished by The Me You Love In The Dark #4 is taking something supernatural and almost unknowable and making it terrifying for the most mundane of reasons. Romance turns ugly quickly as a pleasant situation turns in a surprising and inevitable manner.

Rowena "Ro" Meadows is a financially successful painter who wants a fresh vibe and energy for her work. She rented an unusual house to hide out and soon met its as-yet-unnamed supernatural inhabitant; instead of running out of the house in terror, she found this gentle, thoughtful being a kind of kindred soul, and they shared movies and dancing and conversation. One thing led to another, yadda yadda yadda, and their relationship turned romantic. That was the last issue.

This issue, passion turns to possessiveness from someone who doesn't have a job, doesn't have responsibilities, doesn't have a life outside of those walls — one challenge of becoming someone's whole world. When Ro tries to focus on her work or on any desires to step outside of the darkness-necessitated boundaries of her new paramour, the tone turns ugly and begins to border on abusive. Feeling trapped and unsure of how much power her housemate has, her fear and discomfort only increase as the pages turn.

Writer Skottie Young has struck gold with his tone and pacing here, reintroducing Ro's agent as a catalyst and managing the shift in this relationship so gradually it's almost imperceptible. The rich graphic tableau laid out by Jorge Corona, Jean-Francois Beaulieu, and Nate Piekos makes every turn of the page catch your breath in your throat with nervousness. This blend of a relationship going wrong with something that clearly should have been the reddest of red flags is like watching a train plummet off a bridge in slow motion. You feel like you should look away, but you won't be able to. RATING: BUY.

The Me You Love In The Dark #4
By Skottie Young, Jorge Corona
As Ro's isolation takes a turn toward the dark, a series of events reveals more of the true nature of her mysterious companion. Writer SKOTTIE YOUNG (I HATE FAIRYLAND, Deadpool, Strange Academy) and artist JORGE CORONA (NO. 1 WITH A BULLET, Super Sons, Feathers) follow up their critically acclaimed series MIDDLEWEST with a brand-new haunting tale. Fans of Stephen King and Neil Gaiman will enjoy this beautiful, dark, and disturbing story of discovery, love, and terror.

The Me You Love In The Dark #4 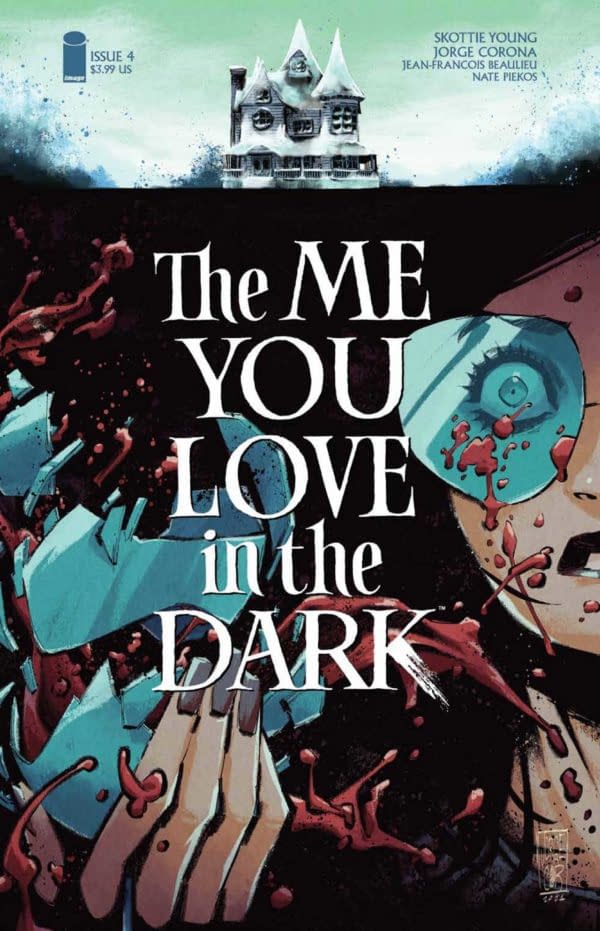 Review by Hannibal Tabu
8.5/10
Passion turns to possessiveness as the Skottie Young-helmed horror story makes its inevitable descent into terror.