It's no easy trick using the actual commission of violence as a means of characterization. Still, The Six Sidekicks of Trigger Keaton #3 manages to pull it off as they introduce the final titular sidekick, Allison Sainte-Marie, who's like Kimmy Schmidt, adding the martial abilities of Dinah Lance and taking away the baggage of a possible connection to the Ku Klux Klan.

The final television show for this "Chuck Norris gone even worse" analog incorporated a young, absolutely lethal woman who grew up on Trigger Keaton's martial arts the same way Christina Aguilera grew up on Mariah Carey runs (which is to say, "maybe doing it even better"). Four of the sidekicks, already tired from almost being horribly killed themselves several times, recruit the diminutive woman (with some reluctance from one party) to help keep them from getting killed … and this issue we find out why.

Kyle Starks is the king of the throwaway one-liner ("I'll stop your motion!") with a script that quips ruthlessly and entertains even in its quietest moments. The means of developing this perfect character of Sainte-Marie has to be experienced as describing it doesn't do its humor and depth justice. The artwork from Chris Schweizer and Liz Trice Schweizer may lack backgrounds now and then, but the visual storytelling is enthralling and never gives you a moment to let your mind drift. All eyes are on the page, as they should be.

It's no mean feat, but this issue is better than the two that went before. Well worth your money, even if you will admit that after a page or so, you'll even hate Trigger Keaton and maybe even be glad he's dead. RATING: BUY.

The Six Sidekicks of Trigger Keaton #3
By Kyle Starks, Chris Schweizer
Looking to increase their muscle to protect their scrawny necks, our trio of former sidekicks heads to the world of underground fighting to recruit a former sidekick and martial arts prodigy. But then they all get drunk, and it's a mess, folks. I think these folks might be dummies. But they're PROBABLY getting closer to solving the mystery. The ACTION MYSTERY THRILLER continues from CHRIS SCHWEIZER and KYLE STARKS!

The Six Sidekicks of Trigger Keaton #3 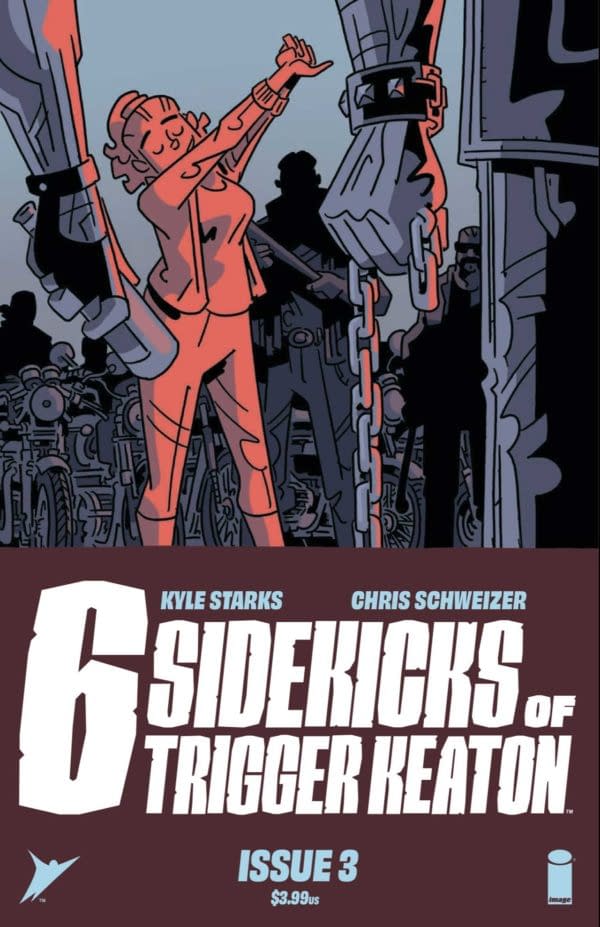 Review by Hannibal Tabu
8/10
Allison Sainte-Marie is here to make an impression in this hilarious, action-packed issue, and she really hopes you feel good about it afterward!

Jonathan Hickman was talking to the Xplain The X-Men podcast on the occasional of their 150th podcast, and the publication of his final X-Men comic book

Greetings from the coal face of the direct comics market. Where retailers try to increase their orders and reorders of certain comics ahead of sale. Where

Explaining All Those Comic Book Creator Credits On Eternals

Eternals has landed on Disney+, which gives us a chance to look at the "Special Thanks" creator credits and to look at the reasons why their name ended up