The solicitation for X-Men #9 was fairly brief.

But in today's Marvel Comics titles, we get a little more with a headline – The X-Men Race Across The Galaxy.

Looks like we might have a bit of an intergalactic Cannonball run with the Sh'iar, Brood and Starjammers. Does that mean we'll also get Sam Guthrie involved too? He and the New Mutants have been hanging out in space with them all after all…

And given that Jonathan Hickman is writing The Children of The Vault in X-Men, with Serafina having her very own relationship with Sam Guthrie… 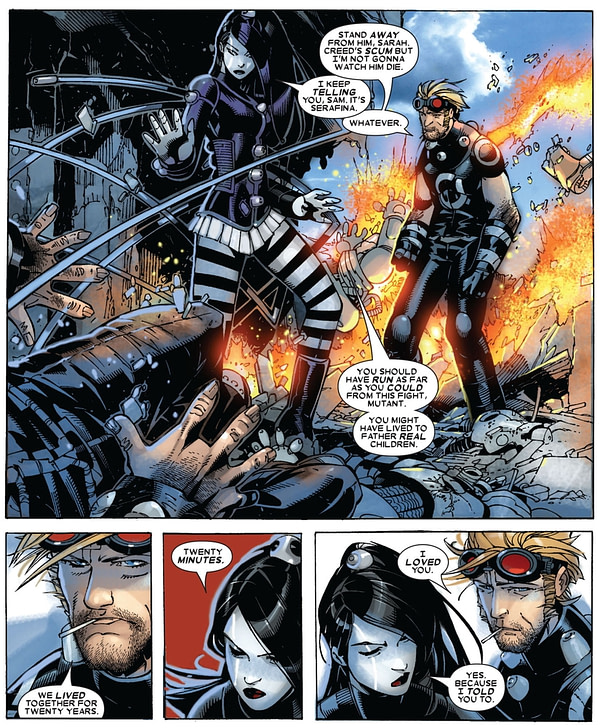 Will this get revisited, now that Sam Guthrie has a wife and kids of his own?

This ad appears in selected Marvel Comics titles published today. I bought my copies from Piranha Comics in Kingston-Upon-Thames. Piranha Comics is a small south London comic store chain with a small south-east store in Kingston-Upon Thames's market centre, which runs Magic The Gathering nights on Fridays, and a larger south-west store in Bromley, which also runs Magic nights and has an extensive back issue collection and online store. If you are in the neighbourhood, check them out.

Did Mark Millar Do His Research For American Jesus Vol 3 On Facebook?

This is how the Image Comics solicitation for the new Netflix-licensed Millarworld comic book from Mark Millar and Peter Gross, American Jesus: Volume 3

Patrick Kindlon is the writer of comic books such as Frontiersman, Run The Dungeon, Antioch, Survival Fetish, There's Nothing There, and We Can Never Go

During the C2E2 Into the Massiveverse panel, writer Mat Groom announced that Inferno Girl Red, written by him, and drawn by Erica D’Urso and Igor Monti

James Tynion IV Is Only No 2 In Comics Substack, So He Tries Harder

In comic book writer James Tynion IV's most recent Substack newsletter, he looks back over a year of quitting DC Comics for Substack, and what he learned

It turns out the new Ranger is kind of a dick in this preview of Power Rangers #22, in stores Wednesday from explosive publisher BOOM! Studios.

Wonder Woman arrives to finish off Doctor Cizko in this preview of Wonder Woman #790, but she shouldn't have bothered... Etta Candy has already trashed the place.

Ms. Marvel teams up with Wolverine in this preview of Ms. Marvel & Wolverine #1. Is this the first step toward making her a mutant in the comics?

Leslie Charteris and the Mystery of Avon's The Saint #4, at Auction

Cover art for Avon's The Saint #4 has been the subject of debate in recent yrs, but style & circumstances still make Matt Baker a possibility