Everything you know is a lie in X-Men: The Trial of Magneto #5, which betrays every promise the story created from its title to its promise of justice. The innocent are condemned, the powerful are confused, and the story, such as it is, only exacerbates the lack of consequences introduced with the Krakoan regime.

The Scarlet Witch, Wanda Maximoff, is back from the "dead," and she's ready to name the person who killed her. Ish. She's ready to name someone, and that person will go down for the crime, but the idea of calling it "justice" is a bit of a stretch. Then, something happens to one of the pillars of life on Krakoa that everyone is very happy about, and Wanda goes from being a pariah to becoming something different.

This book is bad. If its goal was to redeem the character of Wanda Maximoff — a mass murderer in the comics and a torturer and kidnapper on the silver screen — this was like trying to drive to Los Angeles by starting in Lisbon. It's less a question of can it be done and more a question of should it be done? Leah Williams' script rushes past the only actual trial here (a court perhaps led by tall marsupials that jump), shoehorns in the "real" story of what happened, and literally digs up old business. There wasn't much Lucas Werneck, Edgar Delgado, or Clayton Cowles could do to steer this speeding car away from the sequoia with this foundation.

If you're a fan of the X-Men, you may believe that this storyline gave you a gift, bringing back the chance to experience the fun of playing with old toys. Honestly, in a world where we have "somehow, Palpatine returned," there were less arduous and misleading means to do it. As well, by introducing the "augment's blood" argument for Wanda from Star Trek: Into Darkness, she's gone from "challenged character" to "intentional Mary Sue" with alarmingly shabby context.

This "story" will be a minor footnote in this era of mutant history, a tedious attempt at a mystery that ended up as a horrible mistake. RATING: NO. JUST … NO.

X-Men: The Trial Of Magneto #5
By Leah Williams, Lucas Werneck
JUSTICE IS SERVED. The mystery surrounding Magneto and Scarlet Witch is resolved. The guilty will be judged, the innocent absolved, the victims avenged — and all shall endure their own trials.

X-Men: The Trial Of Magneto #5 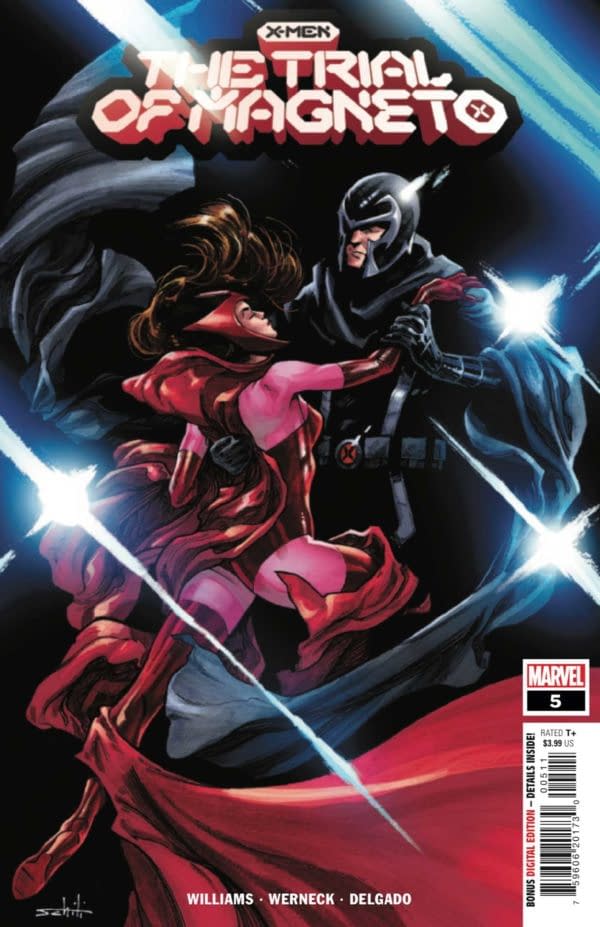 Review by Hannibal Tabu
2/10
The trial is over, but the one who serves the sentence isn’t the master of magnetism, but the reader who suffered through this.
Credits
Editors
Akira Yoshida, Jordan D. White, Lauren Amaro

The Strange Saga of the Black Knight in Zip Comics #2, at Auction

The Black Knight, a supervillain from the MLJ superhero line who debuted in Zip Comics #1 is probably the weirdest character of that name.