Glass Onion: A Knives Out Mystery starts out a little rough, but as each new layer of the mystery gets peeled back like an onion, the film recovers from what appears to be an initial tailspin.

Glass Onion And Living Up To Impossible Standards

Knives Out came out of nowhere in 2019, and no one really knew what to expect from the film. The same could not be said of the sequel because now there are expectations, and those expectations can sink sequels to unexpected hits. There is just no way that you can overcome what happened the first time around, everyone is judging the two movies against each other, and the bar is so high that it would have taken a miracle to surpass it. Glass Onion is not a miracle and for a decent amount of the first third of the movie or so, you think that they have completely messed this entire thing up not just by comparison to the previous film, but in general.

The film leans into the title Glass Onion on more than one level. Not only is there a thing and a place called the Glass Onion in the film that is an essential part of the plot, but the film uses the structure of layers quite literally. It's a little hard to tell whether or not the first layer is supposed to be bad intentionally because it's pretty rough. No one is particularly interesting to watch, and the conversations aren't that engaging. Benoit appears to be stumbling around like an idiot instead of being a master detective, and you're left wondering when the murder part of this murder mystery is actually going to become part of the plot. For most of the first act, it's extremely unclear what the crime is if it has occurred, and who the victim is, so it's impossible to figure out what the motivations for anyone else could be.

Then the next layer is peeled back, and many things start to make sense. The little clues that were evident in the first part of the movie were there the entire time. However, half the fun of mystery stories is that there is some possibility that the viewer could have figured out the answer before the detective on screen did. There wasn't any chance of this happening in Glass Onion because the withheld information was too essential. There were too many pieces for anyone to figure out, so we had to wait for the movie to remove that first layer and explain itself. It makes that entire beginning a lot of setup that doesn't become relevant until later on, and unlike the interviews from the first film, it isn't nearly as enjoyable to watch.

Once Glass Onion Removes That First Layer, It Soars

However, once that first layer is removed and we see all that Glass Onion has to offer, the film truly starts to soar. Much like the last movie had plenty to say about the 1% and how they interact with people they deemed less than them [none of them knowing where Marta is from being the biggest and most obvious example], this film has its eyes set on the rich once again. It's not only a film looking at what kind of privilege exists for famous models, politicians, and tech geniuses, but it is also set against the backdrop of COVID-19. Filmmakers and creatives are still trying to figure out exactly how they want to approach the pandemic. It's a fresh wound for the entire world, but Rian Johnson decided to make fun of the people who were lucky enough to escape the danger because they had the means.

The plot deals with a group of people who can escape to a private island to "pretend everything is normal again." I can't imagine what real-life events inspired that one. There are several moments throughout Glass Onion where it becomes incredibly apparent that Johnson is aware of how these sorts of things play out in the real world. He is willing to almost compromise the story in ways to remain faithful to reality, to be as spoiler free as possible. The story is really interesting, and the mystery is a lot of fun once the movie begins to tip its hand and show you the center of its metaphorical glass onion.

It was clear from the moment the first film ended that people would be breaking down Johnson's door to work on the next one of these films, and he gathered a spectacular cast. Everyone does an excellent job of being insanely unlikable, and really there is one person we are rooting for, aside from Benoit, and that is Janelle Monáe as Andi. Her performance is incredibly layered and dynamic and has a way of drawing all eyes to her the moment she enters the room. She is competing against some very big personalities here, and the fact that Monáe manages to command the room as well as she does says a lot about her as an actor. Daniel Craig is clearly still having the time of his life as Benoit, and credit must be given to Edward Norton, who is absolutely not playing any version of any asshole tech genius that is currently making an ass of himself in real life. Absolutely not.

Glass Onion is not as good as the first film, and the decision to have the first act play out the way it does is an interesting one that eventually pays off, but it doesn't make that first act good. We can hope it's not bad enough to make people turn off the film when it appears on Netflix next month because the payoff is worth it in the end, but you shouldn't have to wait for a mystery film to tip its hand for you to even begin to know what mystery needs solving. Johnson has at least one more of these on the way, and he seems keen to do more; let's see how round three ends up going.

Glass Onion: A Knives Out Mystery 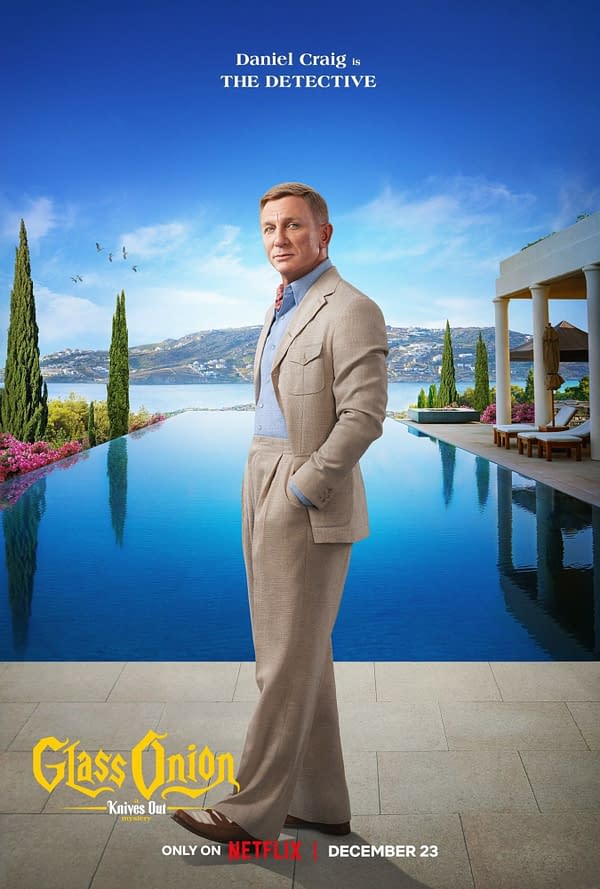 Review by Kaitlyn Booth
8/10
Glass Onion: A Knives Out Mystery starts out a little rough, but as each new layer of the mystery gets peeled back like an onion, the film recovers from what appears to be an initial tailspin.