There are two moments in The Pebble And The Boy, out this Friday in the UK, that is even more fun when shunted together. John Parker, played by Patrick MacNamee, is on a mod pilgrimage on behalf of his dead Dad, delivering his ashes to Brighton, the spiritual home of Mod culture. That peculiar subculture that began with modern jazz aficionados, then into power-rock with The Who, Small Faces, and The Jam, along with sharp suits and haircuts, RAF symbols, and motor scooters – and that that sometimes clashed violently with biker gangs, the rockers.

And then there's all the Quadrophenia movie references, the posters, the locations, John's dad being called Phil as a nod to Phil Daniels, Jesse Birdsall, who was an extra in Quadrophenia, gets a surprise and welcome role in this, as well as another cameo from Ricci Harnett as an old Mod – and who happened to be in the Jam movie Going Underground: A Better Life Than Mine too. Patsy Kensit was also in the mod film Absolute Beginners. Stone Roses bassist Mani plays a potential purchaser of John's bike. Oh, and then there's that great line from mature-beyond-her-years Sacha Parkinson as Nicki, about shagging in the alleyway as well…

But as much as this film is an excuse to play mod music and play out mod culture, and choosing album tracks rather than singles for legitimacy, at its heart, this is a film about teenagers discovering that their parents were as young as them. Did the same stupid, hair-brained, ridiculous things. They fought, they shagged, they cheated, just because. Sometimes they did bad things; sometimes, they did the right thing. And they kept secrets. The Pebble And The Boy is a movie about mod culture from the children of those who lived through it. An attempt to recapture what was, before they were born, in memory of those who came before.

And so John makes his journey, with pitfalls, setbacks, and second thoughts, impeding his journey and his mental process in dealing with it. He picks up a couple of others along the way, the aforementioned Nicki, as well as Logan, gloriously played by Max Boast, who may go on a greater journey than any of them, all teenage children of mod parents, with their own complex relationship with their parents, the past and the culture, and their own reasons for taking the journey. And when John finds the place geographically, it's still not enough; he has to find the place mentally as well. Which yes, means drink, drugs, fistfights, and a visit to the local Brighton Argus newspaper reception.

Mods didn't die before they got old; they got old and then died. Or changed, moved on, became something else, but kept the memories of those days of madness, when everything mattered and tried to recapture that in the clothes, the music, the bikes, and the friends. But now they put their beer bottles on coasters, in designer homes, with a dance floor built into the basement. It's all become a middle-class malaise, and it's left to the kids to try and discover that spirit for themselves. The Pebble And The Boy, named after the Paul Weller song, looks to Brighton's pebble beach and John's relationship to the world and his life to come. He may enter Brighton as a boy, but he might have to do some growing up, fast.

The Pebble And The Boy is an infectious film, it doesn't have the full-blown passion and anger of something like Quadrophenia, but things have moved on. The heart is still there, and it still has to find a way to express itself. It might as well be via Paul Weller as anything… and it's a delightful trip down memory lane while making new ones too. Come on; I'll give you a backsy.

The Pebble And The Boy, written and directed by Chris Green, is on general release in the UK from Friday the 27th of August. And I'm off to Brighton with the kids the day before…

The Pebble And The Boy 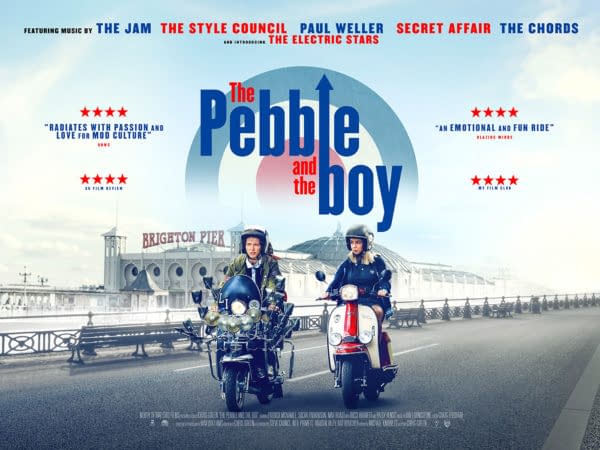 Review by Rich Johnston
8/10
The Pebble And The Boy is a movie about mod culture from the children of those who lived through it. An attempt to recapture what was, before they were born, in memory of those who came before.