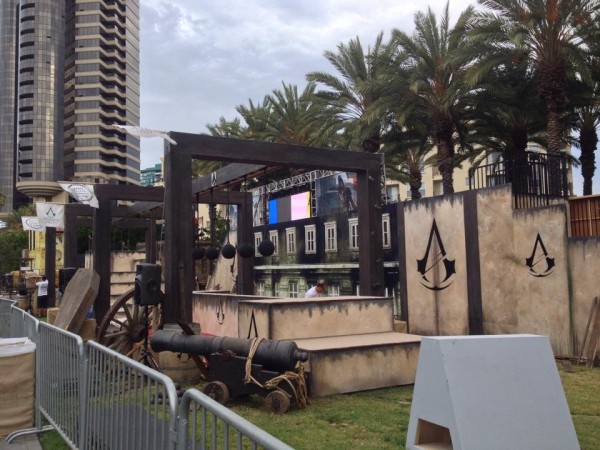 Attending panels in Hall H is cool and all, but nothing beats getting off your butt and actually being in the action and that is exactly what Ubisoft has done with their SDCC offsite event, the Assassin's Creed Experience.  It is described by Ubisoft as "a massive parkour obstacle course" that includes rolling, vaulting and a 25-foot "leap of faith" drop.

I waited two hours on line and when it was finally my turn, I made sure I recorded my run with Glass. Runners had the option to attempt the 25-foot "leap of faith" drop, but if you hesitated in the slightest fashion you were immediately asked to leave. This actually happened to the girl in front of me. Unfortunately I wasn't allowed to wear Google Glass during the "leap of faith" so I couldn't record it, but they actually record the leap for you and send you the link (which I'm still waiting for). My brother however was able to record the jump which I threw in at the end of the video.

I always wanted to do a course like this and this will probably be the closest thing I'll ever get to Ninja Warrior. Here's the video.