Every once in a blue moon, a band comes along that revolutionizes your brain. Even rarer is the band that does so when you're just a child, and still rarer is the one that does so and stays intact to perform through your adult years. They Might Be Giants, an alternative band hailing from Brooklyn, NY, is one such band for us. We saw them perform during their Flood tour at the State Theatre in Ithaca, NY, and here's what we thought about the experience!

It was a very hot day in Ithaca, NY, when my associate and photographer Britt Bender and I went to see TMBG perform. We ensured we got into the line early so as not to completely dry out from the intense heat, indicative of a storm soon a-brewing. Within the venue, the State Theatre, we found that the place was all but devoid of fans. No air conditioning or similar reasonable amenities within the stone building made our stay in the balcony area quite stressful. Nonetheless, we continued even as we sweated through our clothes, trying to regulate. This is something the State Theatre could stand to improve, but we know that's not why you're reading this.

Amid the heat and some ten minutes, after they were set to go on, They Might Be Giants came onstage and began their two sets, free of the pretense of opening acts or anything of that sort. This made us almost completely forget the heat, and we immediately started to enjoy ourselves.

TMBG performed two whole sets for the audience that evening, featuring songs mostly comprised of their 1990 album Flood, as advertised. Two of the songs, "They Might Be Giants" and "Hearing Aid," were both not performed live but rather acted as overture and entracte to the sets, respectively.

There were two very impressive parts to this performance on the whole, in our collective opinion. One of them was when they made full use of the cameras to showcase drummer Marty Beller during their song "Marty Beller Mask," which, as intuitive as that was to us, was quite cool. The other was when, in the first set, the entire band performed their song "Sapphire Bullets of Pure Love" backward – yes, in full reverse – and played it back to us in the second, showing that they got it right with almost 100% accuracy (being live, we can't expect 100% accuracy, but they got quite close to that).

As for the performers themselves, trumpeter Curt Ramm and saxophonist Stan Harrison did absolutely astounding work at this concert. Their dynamic as a brass instrumentalist duo was truly a sight to behold, and their chemistry onstage cannot be denied. Furthermore, John Linnell and John Flansburgh, the vocalists for TMBG, did a great job in alternating who sang what songs as well as supporting each other where a bit more strength was needed, resulting in a strong performance overall each time.

In the end, we had a fantastic time at the State Theatre even despite the stiflingly hot conditions, and we can owe that to They Might Be Giants and their fantastic dual sets (as well as Girlie Action Media, who provided photo access for the concert). The Flood tour is still going strong, with locations all over the continental United States. They've recently added some new locations to the tour. Masks will be required for all legs of the tour, but that should not stop you from masking up and having a good time! 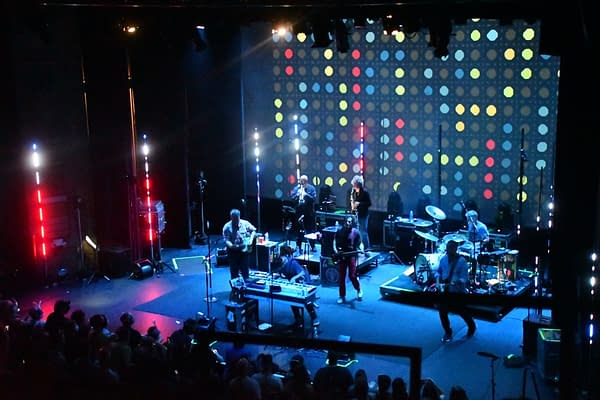 Review by Joshua Nelson
8.5/10
While the venue was very hot, TMBG was cool as cucumbers as they performed two impressive sets comprised mostly of their 1990 album Flood.

Josh Nelson is a Magic: The Gathering deckbuilding savant, a self-proclaimed scholar of all things Sweeney Todd, and, of course, a writer for Bleeding Cool. In their downtime, Josh can be found painting models, playing Magic, or possibly preaching about the horrors and merits of anthropophagy. You can find them on Twitter at @Burning_Inquiry for all your burning inquiries.
Comments will load 8 seconds after page. Click here to load them now.

Heritage Auctions has put a rare, graded reverse-holo copy of Venusaur, a card from the Pokémon TCG, up for auction!

Heritage Auctions has put a rare, graded reverse-foil copy of Mewtwo, a card from the Pokémon TCG, up for auction!

Magic: The Gathering: Top Five Cards We Would 100% Eat, No Cap

There are many Magic: The Gathering cards we would love to get a bite of, but these ones are the most delectable in our opinion!

Pokémon Emerald Version Up For Auction Over At Heritage Auctions

Heritage Auctions has put a rare, sealed copy of Pokémon Emerald Version, a game for the Nintendo Game Boy Advance handheld, up for auction!

Pokémon Red Version Up For Auction Over At Heritage Auctions

Heritage Auctions has put a rare, sealed copy of Pokémon Red Version, a game for the Nintendo Game Boy handheld system, up for auction!

Heritage Auctions has put a remarkably rare test print copy of Dragonskull Summit, a card from Magic: The Gathering, up for auction!

It's Official! MTN Dew Pitch Black Returns to Stores in 2023

The mighty Metallica have announced their first album in 6 years, 72 Seasons and an expansive tour for 2023/2024. Hear the lead single here.

Check out out photo gallery from the Lucca Comics & Games festival that took place a few weeks ago in Lucca, Italy!

Mountain Dew Is Bringing Back The Pitch Black Flavor

Gamers rejoice as one of their drinks is making a comeback on shelves this year as PepsiCo has announced Mountain Dew's Pitch Black is back.