As a raucous Texas crowd welcomed this week's episode of AEW Dynamite, Fyter Fest Night 1, The Chadster was filled with a deep rage. How dare Tony Khan steal this moment from WWE? But that wasn't the only thing The Chadster hated about AEW Dynamite this week. It was only the beginning.

Jon Moxley beat Machine Gun Karl Anderson to retain the IWGP heavyweight title, and The Chadster isn't happy about it at all. This alliance between Impact, AEW, and NJPW is the worst international alliance Japan has been involved in since World War 2. The Chadster is so sick of all these other companies teaming up to bully WWE with an exciting title match to open the show, when everyone knows the proper way to open a wrestling show is with a twenty-minute promo by Drew McIntyre. After the match, Lance Archer challenged Moxley to a Texas Death Match for the title at Fyter Fest Night 2 next week, so clearly AEW has no conscience.

WILD THING! @JonMoxley defends the #IWGP US Championship to kick off #AEWDynamite #FyterFest!

Starting off hot! We're off and running!

Jon Moxley taking it outside, but Anderson gets the upperhand!

.@MachineGunKA came with a game plan as he takes control!

NOT SO FAST! @JonMoxley with the BIG SUPERPLEX!

WHEW, that one was close.

AND STILL! @JonMoxley retains the #IWGP US Championship.

The Murderhawk Monster @LanceHoyt lays out the challenge to @JonMoxley next week in Dallas: Texas Deathmatch!

To the surprise of absolutely no one, @JonMoxley accepts #LanceArcher's challenge for a #TexasDeathMatch next week at #FyterFest Night 2 in Dallas!

Andrade El Idolo wants to know where Death Triangle are. Is AEW having trouble keeping tabs on their talent? It would serve Tony Khan right the way he's always stealing WWE's best stars just because WWE doesn't know they're stars and treats them like jobbers. Totally unfair!

.@AndradeElIdolo is looking for Death Triangle???

With a screwjob by Hook and Powerhouse Hobbs, Ricky Starks took the FTW title from Brian Cage in a match that Cage nearly had won. It's not surprising that Tony Khan would book a screwjob finish when he is the ultimate screwjob artist, screwing over WWE by producing a wrestling show that people find more enjoyable than Raw or Smackdown. The Chadster isn't sure who has more audacity: Tony Khan for the way he books AEW Dynamite, or Hook for going on camera with that haircut.

AND NEW! @starkmanjones is the new #FTW Champion with a little help from @TrueWillieHobbs.

Cody called out Malakai Black for attacking Arn Anderson last week. Black appeared, first on the big screen and then in the ring, but referees broke up the brawl. The Chadster doesn't like this feud one bit. You can't go from hardly being on TV in WWE to a feud with one of AEW's top babyfaces. That's just totally disrespectful of Tony Khan to go against Vince McMahon's vision of Black as a performer. Obviously Black belongs on AEW Dark jobbing to Joey Janella, but Tony Khan thinks he's so much smarter than Vince McMahon. The Chadster hopes Tony Khan grows up one day and learns to have more respect for his elders.

Proud and Powerful bullied Tully Blanchard backstage, pretending to jump him with a tire iron just to scare him. It's no surprise Tony Khan would book babyfaces to bully an old man like that, since it's what he does to Vince McMahon and The Chadster's beloved WWE every week. Be a Star, Tony.

Santana and Ortiz sending a message to the #Pinnacle and #FTR.

Kenny Omega and The elite interrupted a Hangman Page promo to try and jump him, but The Dark Order ran out to get Page's back. A war of words ensued, with Omega trying to convince Page to back down by making him put his title shot on the line in a tag team match with the Dark Order, where if the Dark Order win, they get a shot at the Young Bucks for the tag titles too. But Page said: "The Dark Order never backs down from a fight." Does that mean Page considers himself officially a member? This whole storyline with Hangman Page really tugs at The Chadster's heartstrings, which is so unfair. Why are you making The Chadster feel things, Tony Khan? What kind of monster are you?! Making matters worse, putting over a cowboy in Texas is the worst kind of pandering.

MJF and Shawn Spears attacked Chris Jericho backstage and revealed that the first Labor of Jericho will be Jericho vs. Spears in a match where Spears can use a chair and Jericho can't. That stipulation is actually symbolic of the way AEW operates with an unfair advantage over WWE by producing television people like. The Chadster would root for Jericho to overcome these labors, but he's a traitor.

Christian Cage beat Matt Hardy in a match that even The Chadster has to admit was pretty good. Just two beloved veterans, once counted out by WWE, showing that they can still do it. It was absolutely disgusting. After the match, the Hardy Family Office tried to jump Christian but Jurassic Express made the save and Cage rode around on Luchasaurus's shoulders in victory. The Chadster was not amused at all. For decades, Vince McMahon hoisted the entire wrestling business on his shoulders and carried it around, but does Tony Khan show any gratitude for that? Of course not. So this was in extremely poor taste, in The Chadster's opinion.

#ChristianCage heads to the ring to settle the score with @MATTHARDYBRAND.

.@Christian4Peeps takes to the skies!

.@MATTHARDYBRAND pulling out all the stops with a DDT on the stairs.

A low blow and twist of fate STILL doesn't put #ChristianCage away.

Counter into the #Killswitch and @Christian4Peeps remains undefeated in #AEW!

In a backstage promo, Miro unveiled a new TNT title belt, with white leather and green accents. It actually looks better than the previous belt, which is not the way belt redesigns are supposed to work. Just another example showing how Tony Khan doesn't understand the wrestling business at all.

The #AEW Women's Champion @RealBrittBaker and @NylaRoseBeast are ready to collide in Dallas next week!

Britt Baker cut a promo on Nyla Rose, and then Nyla cut one on Baker in return. Baker has really grown into her role as the face of the AEW Women's Division. The Chadster hopes Adam Cole realizes how disrespectful this is to their relationship and dumps her.

The #AEW Women's Champion @RealBrittBaker and @NylaRoseBeast are ready to collide in Dallas next week!

Sammy Guevara beat a debuting Wheeler Yuta in a match that, judging by Yuta's ring attire, was a product placement ad for Subway. Sure, and Britt Baker was accusing WWE of taking blood money last week. Hypocrites.

It's the #AEWDynamite debut of @WheelerYuta, but he has a tall task ahead of him as he faces @sammyguevara.

QT Marshall poured a cup of coffee on Tony Schiavone's head in a backstage interview. We've all wanted to do it, QT. Tony lends legitimacy to AEW's product, which absolutely makes The Chadster crazy.

Welcome back to #AEWDynamite, @YukaSakazaki. She takes on @thePenelopeFord NOW!

Yuka Sakazaki beat Penelope Ford in her first match in AEW since the start of the pandemic. AEW fans seemed pleased to see another solid talent join the women's division, so naturally, it really cheesed The Chadster off. Excuse The Chadster's language.

Welcome back to #AEWDynamite, @YukaSakazaki. She takes on @thePenelopeFord NOW!

The #MagicalGirl flies high for the victory!

In a main event that AEW announcers continue to call the first-ever coffin match, Darby Allin stole The Undertaker's gimmick by putting Ethan Page in the coffin to win. Sting got involved in the match to take out Scorpio Sky, brawling into the stands with him and making the crowd go nuts. Seeing Allin wrestle in front of a big crowd in the main event of AEW Dynamite Fyter Fest Night 1, and seeing the crowd go absolutely crazy for him, flaunt's AEW's star-making abilities, which is really rude, if you think about it. Hopefully, when massive babyface Jaxson Ryker finally performs in front of a live crowd on Raw next week, WWE will show AEW how it's really done — by pushing someone the crowd hates and then refusing to back down no matter how much they boo.

Fyter Fest Night 1 was another thrilling episode of AEW Dynamite, and The Chadster hated every single second of it. Tony Khan has gotten away with disrespecting WWE for so long it may be the longest-running angle in pro wrestling, which is in and of itself disrespectful because everyone knows wrestling fans are meant to have the long-term memory of a goldfish. Even so, The Chadster really hopes Tony Khan gets his comeuppance one day. But it probably won't be next week for Fyter Fest Night 2, which has an even more stacked card than this week's show. Augh! 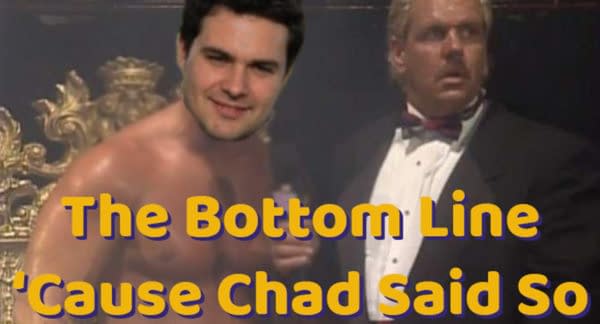 Review by Chad McMahon
8.5/10
Fyter Fest Night 1 was another thrilling episode of AEW Dynamite, and The Chadster hated every single second of it. Tony Khan has gotten away with disrespecting WWE for so long it may be the longest-running angle in pro wrestling, which is in and of itself disrespectful because everyone knows wrestling fans are meant to have the long-term memory of a goldfish. Even so, The Chadster really hopes Tony Khan gets his comeuppance one day. But it probably won't be next week for Fyter Fest Night 2, which has an even more stacked card than this week's show. Augh!

Football Continues to Unfairly Bully WWE in Ratings; Be a Star, NFL

Thanks to Roman Reigns, WWE Raw saw a jump in viewership and ratings this week, but with the NFL colluding with Tony Khan, will it be enough to beat AEW Grand Slam?