Aside from the final Craig Robinson episode, season eight of NBC's Brooklyn Nine-Nine felt like an underwhelming experience, with about three-quarters of the fun saved up for the series finale "The Last Day", which is an hour-long experience as per the NBC's odd programming decision to burn off the episodes two at a time, as soon as possible. I would say "PB&J" mustered up about twenty percent while the remaining seven episodes split up the remaining five. Before we go any further, we're throwing on the "MAJOR SPOILERS AHEAD!" sign just so we can explain the scope of the how far along the series has gone.

To start, let me say that there's nothing wrong with trying to have narratives on police reform and trying to save a failing marriage. But given the short time with the 10-episode allotment, it really took away from what made the series special in the first place, its core cast & memorable recurring guest stars. "The Last Day" didn't involve any police work but focused on the series' most signature annual event, The Heist. And those are the times that contain more twists & turns than an average M. Night Shyamalan film, except this is intentionally funny and never drags.

The story involves a critical decision for the squad's lead detective Jake Peralta (Andy Samberg), leaving the NYPD. And what better way to do that than to organize his biggest heist yet, giving his best friends parting gifts along the way and recruiting his wife Amy Santiago (Melissa Fumero) who received a promotion along with Raymond Holt (Andre Braugher) in the previous outing). The key part of this episode is how involved everyone is within their respective arcs from the core cast. No one is left out and everyone shines, and that includes Joe Lo Truglio's Charles, Terry Crews' Terry, Dirk Blocker's Hitchcock, and Joel McKinnon Miller's Scully.

The surprise cameos sans Robinson are the usual recurring guest stars that make Brooklyn Nine-Nine special including a former cast member. As much shade I've cast shade on the final season, this would've worked as a two-hour finale film wrapping up the series as a bookend to Season 7. As nice as it was to see Braugher's Holt and Marc Evan Jackson's Kevin Cozner rekindle their relationship, it just felt off in the sense that the way they defined their marriage wasn't dissimilar to what we've already seen- even when they were bickering over smaller things. Speaking of timing, with Jake quitting it would have been a great opportunity for Rosa (Stephanie Beatriz) to also come to the conclusion to leave the squad instead of it being an abrupt decision that never really gets developed. It was nice seeing Beatriz getting as involved in the finale as the others, like in previous seasons.

"The Last Day" is easily the best episode of the final season, perhaps a "Top 5" episode overall, but certainly an instant classic for sure. Directed by Linda Mendoza and written by Luke Del Tredici & Audrey E. Goodman, they wrapped up Brooklyn Nine-Nine the best way they possibly could. While it was a shame a few more memorable characters like Dean Winters' The Vulture or Ken Marino's CJ couldn't appear, we got most of the fan favorites back to help send the Nine-Nine off one last time. I guess you could say it was a pretty "noice" note to end on. 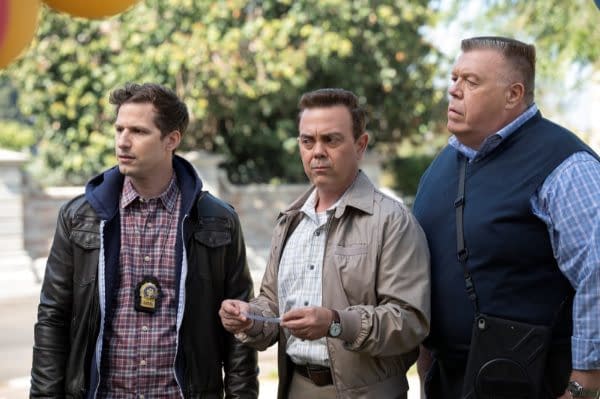 Review by Tom Chang
10/10
"The Last Day" is easily Brooklyn Nine-Nine's strongest episode in the final season, giving everyone in the core cast and favorite recurring guest stars something to do in the best possible... with a heist. It's a near-perfect sendoff that had everything. Credit goes all around with Andy Samberg, Melissa Fumero, Andre Braugher, Terry Crews, Dirk Blocker, Stephanie Beatriz, Joe Lo Truglio, Joel McKinnon Miller, and Chelsea Peretti for being the true comedic professionals we've always known them to be.
Credits
Director
Linda Mendoza

Kicking off the week with surprising news, reports are that Black Mirror is getting ready to make a return to Netflix for a sixth season.

Close to three months since Paramount Network announced its return, production on the fifth season of Yellowstone kicks off in Montana today.