The third episode of Disney+ & Marvel Studios' Hawkeye gives us some insight into one of the other players for the series, Maya, and we learn she is yet another Marvel "villain" with a pretty justifiable reason for hating one of our Avengers. It seems to be a pattern in the Marvel universe that we keep getting presented with villains where it's a little hard to completely hate them because our hero did something that wronged them, and here we are. The first two episodes of Hawkeye were about the set-up for where Clint is emotionally and why he's in New York and how Kate gets involved, and some of her motivations. Now we are working on the third player in this drama.

We knew that Alaqua Cox was going to be impressive, you don't get Marvel to give you an entire show if you don't kick the door down and impress people, but she really is on another level. The sheer amount of screen presence that she has is off the charts, and you know she is the most dangerous person in the room the moment she walks in. However, she also doesn't hide that Maya is a person who is doing all of this out of pain, and you can truly see that in her eyes.  This woman is a star, and it is very apparent why Kevin Feige and the rest of Marvel immediately handed her an entire series of her own. There is so much beneath the surface of this character that you wish the flashbacks in the episodes were longer so we can spend more time with her. Kate was already going to be one of the breakout characters of this series, but Maya is right up there as well, and she should be.

The rest of the episode gives us that trick arrow car cash that we've been seeing in virtually all of the marketing. That's good because it means we haven't seen much from the rest of the series yet, and these latter episodes can really surprise us. We've been waiting to see some good trick arrows in the Marvel universe for a long time, and this episode finally delivered. They are just as ridiculous, dangerous, and sometimes useless as they are in the comics. It was also nice to see some Pym Tech being used in an arrow. The way that Clint and Kate use it is very clever, and it's a nice callback to that moment with Ant-Man and Hawkeye during the airport fight in Captain America: Civil War. Also, everyone always gets Stark Tech in this universe even though Pym Tech is right there. So it's nice to actually see someone taking advantage of the other major technology that they have connections with. Maybe Scott and Clint bonded on The Raft.

The episodes in Hawkeye continue to move at a brisk pace, and there really isn't a ton of time wasted. The moments that are slower, such as Kate bonding with one of the Tracksuit Mafia guys, aren't there to drag down the pacing. They are brisk, and they add some character beats as well. Something like that shows that Kate sees the benefit of forming connections with the people who have captured her. Kate and Clint are expanding on their dynamic, too, and they really do play off of each other so well. Renner and Steinfeld just have a very easy and believable back and forth whether they are in a car chase arguing over trick arrows or when Kate is trying to help Clint reassure his son over the phone. Clint wants to keep Kate safe, and Kate is really starting to come to terms with what Clint is sacrificing to be here to protect her. Their moments together are truly lovely.

What was missing from this episode was any sort of expansion with Elenor or Jack. The only teasing we get for other villains that might be running around is the person that is above Maya and her "Uncle." Right now, the internet is swearing up and down that it's Kingpin, and it very well could be. However, Marvel does like to link their villains together in some way, and making the Uncle be Jack would link Maya and Jack together in some way. Also, then they don't need to build up a third villain as well. The series is halfway over, and these last three episodes are going to need to hustle just as much as the other three. How much time do we actually have to introduce even more villains, backstories, and motivations? You cannot go into Hawkeye, a series on Disney+ for a family audience would automatically know who Kingpin is, a villain from a show with a completely different audience.

The most important thing, though, and the thing that makes this episode just as good as the first two, is the Goodest Boy in the Marvel Universe got his name. 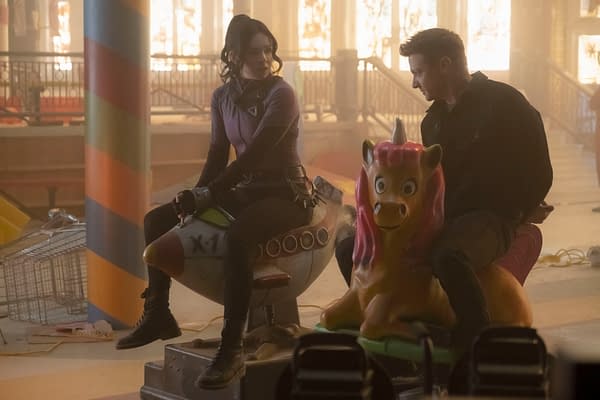 Review by Kaitlyn Booth
9.5/10
The third episode of Disney+ & Marvel Studios' Hawkeye gives us some insight into one of the other players for the series, Maya, and we learn she is yet another Marvel "villain" with a pretty justifiable reason for hating one of our Avengers.

Guardians of the Galaxy Vol. 3 – The Last Time We'll See This Team

Guardians of the Galaxy Vol. 3 was supposed to be the first Marvel movie out of the gate going into Phase 4. Then a bunch of internet weirdos decided that

Moonfall: 15 Images and a New Clip Don't Disprove the Moon is Haunted

Uncharted: Final Trailer, A Featurette, and a Weird Looking Poster

Uncharted is a lot like Deadpool in that no one will believe this movie is actually happening until the credits roll . A film that has been in varying

Warner Bros. has released a new poster for The Batman that leans into the serial killer themes they will be exploring with the Riddler.