If you love your The CW-esque angst teen soaps that coincidentally also happen to be slasher-thrillers, then Amazon's I Know What You Did Last Summer might just be the thing for you. Based on the Lois Duncan 1973 YA novel and first adapted as a 1997 feature film written by Scream's Kevin Williamson, the showrunner Sara Goodman provided her own spin on the tale of five adolescents impacted by a fateful night that changes their lives forever.

Madison Iseman plays twin sisters Lennon and Allison at odds with each other with their contrasting personalities. The other main characters are their father (Bill Heck) and their friends Margot (Brianne Tju), Riley (Ashley Moore), Dylan (Ezekiel Goodman), and Johnny (Sebastian Amoruso). I found it hard to really identify with most of the characters because there's a ton of overlap with them. You can spot a difference here and there, but they're largely carefree, promiscuous, and deep into their vices with their drugs of choice.

Of the four episodes, I found myself largely nodding off during the premiere, because of how uninteresting the characters are and it was only when the events that set the series in motion that things finally picked up: you know, the anticlimactic fatal accident the teens found themselves in. Following the accident a year later, a bloody goat's head is found inside a closet along with the words scrawled on the door, "I Know What You Did Last Summer", an allusion to what the teens thought they hit initially. While most of the performances are largely forgettable and at times grating, I can hardly blame the actors given what they have to work with. I understand if it's going to be largely by design, but it just doesn't really draw me in when the same template is applied to multiple actors, giving off more of a "going-through-the-motions" vibe.

Iseman shines because she plays twin sisters with distinct personalities dealing with the aftermath of said trauma, and she executes it well. She knocks it out of the ballpark the way she chews scenes. It's somewhat predictable, but perhaps as the season goes on, there will be some exciting twists along the way. Perhaps the biggest one is that I might actually start caring for another character that isn't Iseman's, but I'm not holding my breath right now. I Know What You Did Last Summer is currently streaming on Amazon.

I Know What You Did Last Summer 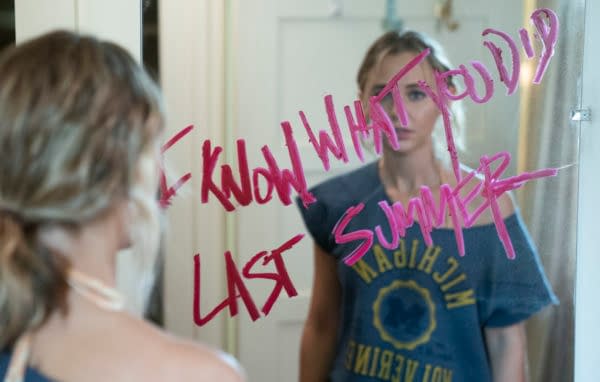 Review by Tom Chang
3/10
EP James Wan and showrunner Sara Goodman mean well trying to update the 1973 Lois Duncan YA novel to series for Amazon, but largely irrelevant characters are muddling things and creating a mess. Madison Iseman carries the series on her back when she's not drowning in angsty cliches from her "friends."
Credits
Creator
Sara Goodman