This week's episode of Freeform's Motherland: Fort Salem, "Brianna's Favorite Pencil" brings forth the Halloween vibes. The unit competes to communicate with the dead, Camarilla strikes again, and human traditions get pretty dark. Oh, and let's say: there is a reason why the title is "Brianna's Favorite Pencil". It was left behind, and it was pretty satisfying albeit a bit dark as well.

So first thing: the Camarilla has targeted the train that Khalida (Kylee Brown) and Adil (Tony Giroux) were in heading to India. Unfortunately, they were the only ones that seemed to escape and putting the truth out there for the world that the Camarilla is out again. I think it is safe to say our Talder situation did not bear any fruits. Turns out General Alder (Lyne Renee) is not as willing to give answers as Tally (Jessica Sutton) was thinking. I mean, we all should have known better, yet I still hoped. Also, it was clear Alder was not aware of the lingering connection between her and Tally and ordered for it to be severed right away… and possibly rightfully so, there is too much she seems to be keeping a secret. Though I have a feeling this will not be the last of Alder's memories that Tally will be seeing.

So Samhain has come and our unit of witches must follow the tradition of protecting the fire – I like the little delves into witches' traditions and history they tend to do. This one is in order to commune with the dead and get a chance to talk to a dead person of your choice if you manage to keep the flames alive until midnight. Of course, our witches are pretty badass and manage to win this round. Abigail (Ashley Nicole Williams) and Tally call upon their dead and manage to speak to them. However, Raelle (Taylor Hickson) is left waiting, feeling as if Willa did not want to speak to her. Tally learns the truth: Alder was not as benevolent as she might have thought leading to many deaths. Abigail has left the experience fired up and out for blood from the Camarilla. As she discusses this with Tally, Adil returns… however, am I the only one feeling there is something fishy going on with him? Hmmm…

Scylla (Amalia Holm) and Anacostia (Demetria McKinney) get invited by the muggles to a Halloween party. Well, turns out Shane (Juan Riedinger) kidnapped his daughter's friend and brought her as an offering for their little deadly tradition. This scene was a little uncomfortable for me to be honest, just seeing them take their stones gave me chills. However, Scylla and Anacostia came to the rescue. Those muggles deserved worse. And for those who were thinking Scylla got weak and soft? Well, this episode is to remind us all that she is still one deadly b*tch. Just a bit less ragged on the edges and feelings. Oh man, but was that ending deserved. I wonder what the repercussions will be for Scylla's actions with next week's episode of Freeform's Motherland: Fort Salem. 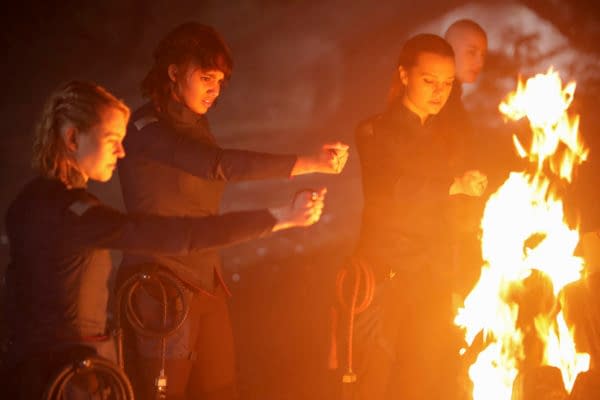 My Hero Academia Season 5 ended with a "BANG!" with "The High, Deep Blue Sky", offering us a sense of how bad things are going to get.

What We Do in the Shadows S03E05 Review: Guillermo the Manipulator!

This week's episode of FX's What We Do in the Shadows "The Chamber of Judgement" was another success for the impressive third season.

It's Always Sunny in Philadelphia: In Honor of Dee, The People's Bird

While we have a break in the Season 15 filming updates, FXX's It's Always Sunny in Philadelphia is honoring Dee Reynolds, The People's Bird

The Walking Dead S11E06 On the Inside Scene: Kelly Clues In on Connie

In the following preview for AMC's The Walking Dead S11E06 "On the Inside," Kelly may have found a clue to lead her to Connie.

In the following preview for the next episode of FX on Hulu's Y: The Last Man, Agent 355 gets to the "point" of the matter with Yorick.