Once again, Freeform's Motherland: Fort Salem waits until the last minutes to give us the meat we need with this week's episode, "Mother of All, Mother of None". One thing that must be noted about this season of Motherland: the pace of the story has been moving along at a fantastic speed. No story gets lingered upon for long periods of time, things are addressed in a fairly quick manner- giving us little crumbs of answer as it moves along. I am a very big fan of the writing this season- they have improved upon the first season, and keep adding on layers upon the world they have created wonderfully and without falling into cliches. The world-building of Motherland is one of the elements I enjoy the most of this show.

Before anything else: I must confess I was very doubtful of Adil (Tony Giroux)– I even theorized he had probably killed Khalida (Kylee Brown) and that is why we had not seen her since the incident. I am glad to say I was wrong. Well, we get to see Khalida again and she realizes our dud is not about peace anymore, he has partaken in violent methods with Abigail (Ashley Nicole Williams)… re killing. She berates him and goes away. As someone who grew up with a very spiritual dad who taught us about the same she preaches: I understand what she is saying. However, I kinda' agree with Adil- at some point, you have to punch back instead of turning your cheek. I mean, they unleashed witch plague on you, enough is enough.

This week was all about dismantling the current structure within the witches' society, it seems– all thanks to Petra (Catherine Lough Haggquist), who after being berated by mommy decided to really double-down on bringing General Alder (Lyne Renee). Now that Nicte (Arlen Aguayo-Stewart) is caught and sentenced to death, Alder is being asked to step down for altering with history pretty much. While I agree she took on some shitty methods, I have a feeling (and hope) there is more that we have not seen yet. That said, I am pretty disappointed in Tally's (Jessica Sutton) reaction against her. Granted, I am also biased for Talder, so I guess that is where my hope ends. I am also disappointed in Raelle's (Taylor Hickson) reaction considering the Mycelium revealed itself to her and answered a few questions: what it is and why it exists; which basically offered some backing for Alder without quite excusing her actions. That said: I hope her stepping down marks some big mistake and ends up costing General Bellweather. Anacostia seems the one who deserves some seniority more.

That last scene between the Vice-president and his daughter really has me thinking he is part of the Camarilla– it seemed so foreboding as if he was saying bye to her in some way. I really do not trust that dude. Anyway, all the powers that be seemed to have come toe to toe at Fort Salem: The witches, The Spree, and the Camarilla. I hope Nicte repays our trio for sticking their necks up for her and offering their life for hers since it seems a big war might be breaking soon. I cannot wait for the next episode of Motherland: Fort Salem, and I am praying Alder remains alive. I mean, c'mon, you cannot kill her… right?

Motherland: Fort Salem Season 2 Episode 9 "Mother of All, Mother of None" 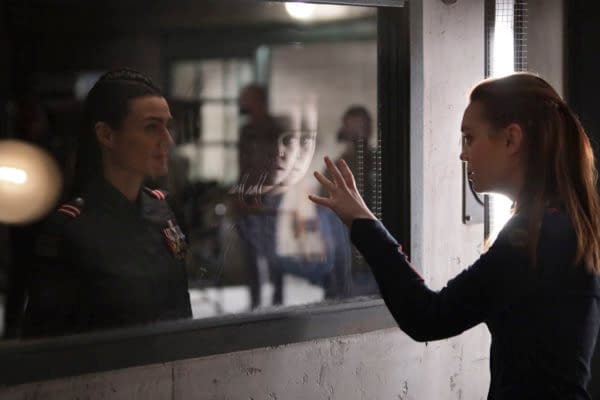 Review by Alejandra Bodden
7.5/10
Once again, Freeform's Motherland: Fort Salem waits until the last minutes to give us the meat of the story we need- but "Mother of All, Mother of None" was well worth the wait.

The last episode of Demon Slayer: Kimetsu No Yaiba Mugen Train Arc "Set Your Heart Ablaze" is as visually beautiful as it is heartbreaking.

Demon Slayer: Kimetsu No Yaiba Mugen Train Arc E06 "Akaza" was a wonderful shonen treat where the Mugen Train wasn't the only danger.

In the fifth episode of Demon Slayer: Kimetsu No Yaiba Mugen Train Arc "Move Forward!," it was time to see our slayers in action.

Demon Slayer: Kimetsu No Yaiba Mugen Train Arc "Insult" was a testament to Tanjiro's willpower and had the most triggering moment so far.

What We Do in the Shadows S03 Finale "The Portrait" Review: Moving On

FX's What We Do in the Shadows wrapped up Season 3 with the stellar episode "The Portrait," leaving a ton of twists-n-turns in its wake.