This season of My Hero Academia ended up with a BANG! with this week's episode, "The High, Deep Blue Sky". After a slow, but steady buildup filled with a deep foreboding feeling, the season ended giving us a clear perspective of where things stand and how bad they are about to get. The Meta Liberation Army has surrendered itself to the League of Villains and now they have become the Paranormal Liberation Front. Their intentions have become All For One's intentions and clearly, nothing good will come from it– as Deku mentions at the end, it seems an incident is about to come and things will not be the same.

After a bit of a slow stagger, My Hero Academia has done a great job in getting me pumped up for what is about to come. Doctor Daruma Ujiko explains to Shigaraki the keywords we have been wondering about since Deku met his predecessors: quirk singularity. It seems as quirks have evolved and mixed with other quirks, by the fourth generation it seems to start becoming too hard to control for a regular human body to control. Pretty much we get some insight into Deku and Shigaraki himself getting hurt after unleashing power full-force. It seems Shigaraki is preparing his body to handle his own power.

We do get some insight into the Paranormal Liberation Front from Hawks perspective– he is still working underground and keeping appearances for Dabi. However, we do get some answers. What was in the big bag Hawks carried last time? Do you remember that missing person poster Bakugo was looking at? Our biggest fears have been confirmed and Best Jeanist has been killed. If this is a taste of how bad things are about to get, my heart will not be able to take it, I am sure.

Class 1-A seems to be getting their last moments of ignorant bliss before shit hits the fan. Although we do get to see how much they learned during their work studies under Pro-Heroes. I love their relationship and how much they inspire one another to use their powers in different ways and grow. It seems things are about to take a turn with Eri as her horn seems to be growing once again. I wonder if her power is like Shigaraki, that she needs to unleash it in order for the itch to calm down. We also get a very nice scene between Aizawa and All Might. All Might confesses how powerless he feels now even though he has decided to live; Aizawa reminds him the best way he can help and honor those he cherishes is by staying alive and guiding them to the best path.

It was a very good episode to end this season of My Hero Academia. I seriously cannot wait for next season and for the following arc. The hints to what is about to come were laid pretty heavy and Deku clearly states could be the end of Japan pretty much. I wonder how bad things are about to get. Although I am very much looking forward to seeing our heroes in training grow into fully-fledged heroes capable of bringing forth a new society. 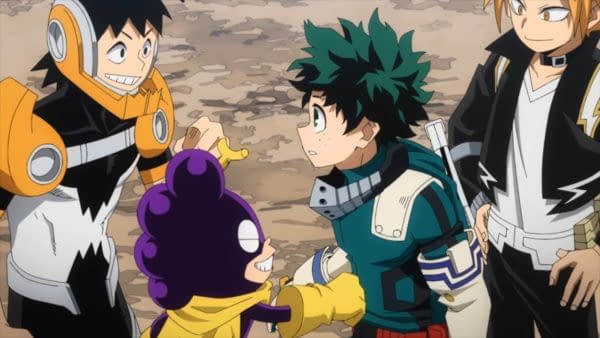 Review by Alejandra Bodden
8.5/10
This season of My Hero Academia ended up with a BANG with this week's episode, "The High, Deep Blue Sky". After a slow, but steady buildup filled with a deep foreboding feeling, the season ended giving us a clear perspective of where things stand and how bad they are about to get.

What We Do in the Shadows S03E09 Review: A Heartbreaking Farewell?

This week's episode of FX's What We Do in the Shadows "A Farewell" was just... WOW! Unexpected, incredibly surprising & heartbreaking.

Demon Slayer: Kimetsu No Yaiba Mugen Train Arc takes us back to the beginning for some seriously deep feels with "Deep Sleep": Review

What We Do in the Shadows S03E08 Offers Healthy Dynamic Change: Review

This week's What We Do in the Shadows focuses on mental health with "The Wellness Center" as a vampire deals with depression and loneliness.

This week on FX's What We Do in the Shadows "The Siren" finds our dear vampires dealing with issues of self-worth and sirens.

Ring of Honor announced a 2022 Q1 hiatus following ROH Final Battle in December, with a "pivot" and a return to a "fan-focused" product in April.

Fortnite & Universal Series "We Will Be Monsters" Offers Modern Takes

Universal Pictures & Epic Games' Fortnite team up for the animated series We Will Be Monsters, with modern takes Dracula, The Bride & more.

The recap of the 2021 NXT Halloween Havoc event, which saw quite a few new champions crowned in some high risk match stipulations.