Hey gang!  So it was a pretty lousy showing for the SmackDown brand at this past Sunday's Survivor Series, with the blue brand losing all of their matches, except Shinsuke Nakamura defeating Damien Priest via disqualification on the preshow and Roman Reigns defeating Big E in the main event.  So what will be the fallout of such a bad outing and will we find a new contender for Reigns and his Universal title?  Let's find out!

We learn at the opening that the main event tonight will be a Black Friday Invitational Battle Royal, where the winner will challenge for the Universal title.

Who will be the next to challenge @WWERomanReigns for the #UniversalTitle?

Kayla Braxton is in the ring and mentions rumors about Brock Lesnar's suspension.  That brings out "The Head of the Table", as Universal Champion Roman Reigns, with Paul Heyman, hits the ring.  Heyman takes the mic from Braxton and mocks her for spreading rumors.

Heyman scolds her out of the ring as the crowd chants "we want Brock!"  Reigns then says everyone on SmackDown are losers and Brock Lesnar is the biggest loser, as he's beaten him.  He then mocks tonight's Battle Royal and says they're desperate to find anyone to challenge him.  Reigns says he's the greatest of all time and eventually everyone will acknowledge him.

An instantly forgettable match with some surprisingly slow and sloppy moments, considering who's in the ring here.  A predictable ending though, as Hardy hits the Swanton Bomb for the win.

We go backstage, where Paul Heyman continues bothering Kayla Braxton about her spreading rumors about Brock Lesnar returning.  He says if confirmation of Lesnar's returns isn't confirmed by the end of the night, Braxton is gone.

It's Ridge Holland's SmackDown in-ring debut here and he gets to show off his strength and power against one of the best workers in the industry in Cesaro.  Unfortunately, it's a pretty short match with a sudden ending when Cesaro gets an inside roll-up on Holland for the win.

We head backstage, where Drew McIntyre speaks with Adam Pearce and Sonya Deville about the Battle Royal tonight and whether or not he's in the match.

So, surprisingly, they actually have a wrestling match here and not a food fight, despite the ring being surrounded by tables of Thanksgiving food items.  Due to a distraction on the outside, Angel hits the Wingclipper to get the win.

Kayla Braxton tries to interview Adam Pearce backstage about the Battle Royal competitors tonight and then about the rumors of Brock Lesnar's return.  She says she's sure he remembers what led to Lesnar's suspension and then, I shit you not, we go into the mind of Adam Pearce as he relives Lesnar's attack on him.  What the hell are they thinking here?!  This is pro-wrestling, which despite its silliness, is presented as a sports broadcast for the most part.  Why are we entering a character's thoughts inside their head like it's a movie or something?

Anyway, we come back to reality and Pearce says he knows nothing about that and he would be shocked if the suspension was lifted anytime soon.

SmackDown Women's Champion Charlotte Flair is in the ring with Michael Cole now, being interviewed about her loss to Becky Lynch last Sunday.  Flair goes on about Lynch cheating and getting away with it.  She then says she's still the most dominant woman here, which brings out Toni Storm, who mocks Flair for letting Lynch into her head.

Storm challenges Flair again, but Flair says she's on a different level than her.  They come to blows and Flair hits Storm in the face with a pie.  She literally pied her in the face.  And then does it again with another pie.  So let's think about the logic here in building Toni Storm: you have a young star you're trying to get over as a legitimate threat to your Champion and you not only have the Champion laugh off her threats but then hit her in the face with pies repeatedly?  I know Vince found this bit hilarious but goddamn…

We head backstage again to see Sasha Banks confront Sonya Deville about the women at Survivor Series turning on her.  Banks gets on her about her issues with Naomi, which leads to Deville making a match with Banks & Naomi versus Natalya & Shayna Baszler (because they just have to keep going back to that well over and over…)

A match that we've seen more than enough variations of and the continuation of a storyline nobody gives a damn about in Deville trying to screw Naomi for some reason that's never been clear.  This is just WWE creative laziness at its peak here on SmackDown.

Naomi gets a Sunset Flip on Natalya for the win and then gets in Sonya Deville's face at ringside.

We go backstage to see the list of names posted of who will be in the Battle Royal tonight.  Drew McIntyre comes over to find out that he was left off of the list.

With everyone in the ring already, Drew McIntyre heads to the ring with his sword and chases everyone from the ring, and dares someone to challenge him.  Adam Pearce runs out and tries to convince McIntyre to leave the ring.

We come back from a commercial break to learn McIntyre just left.  Ok…

This is a boring and quick Battle Royal with no fun or exciting moments here, kind of like SmackDown in general tonight.

So a few minutes into this, Sami Zayn falls through the middle ropes and chills on the outside.  In the ring, it comes down to Corbin, Sheamus, and Jeff Hardy.  Corbin eliminates Sheamus and then Hardy tosses Corbin out to the delight of the North Caroline crowd.  Zayn then runs in and pushes Hardy out and wins.

We see Roman Reigns in his locker room laughing at the outcome.

Kayla Braxton goes into the ring to interview Zayn but then gets "breaking news" in an earpiece she's allegedly wearing, that Brock Lesnar's suspension has been lifted and he will be appearing on SmackDown next week.

We cut back to Reigns' room where they all look dismayed, especially Paul Heyman as the show ends.

This was a horrendous episode.  Just awful, start to finish.  The main story thread throughout revolved around an interview personality.  Not a wrestler, but rather someone who holds a microphone and smiles.  That is creative laziness on a staggering level.  Embarrassing. 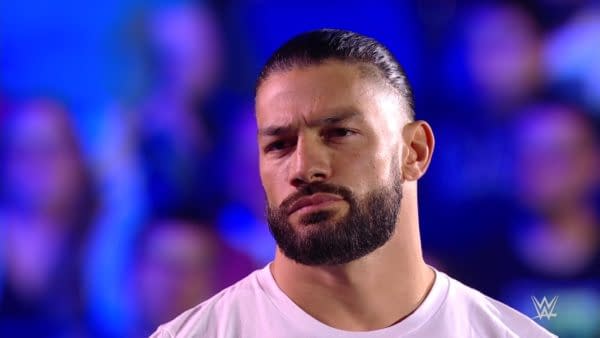 Review by Ryan Fassett
1/10
A truly awful episode of SmackDown, beginning to end. No good matches. No interesting story or character stuff. Just pure laziness. It only got a 1 instead of a 0 because they fought the urge to have a food fight match at some point, which I guarantee was in an early draft of this awful show.

WWE Hall of Famer Mick Foley has fired back at GCW star Matt Cardona after he wore attire insulting the hardcore legend at a show last night.

Our recap of last night's WWE SmackDown on Fox, where Raw stars Seth Rollins and Kevin Owens challenged the Usos in the main event.

NXT 2.0 Coaches Asked By Vince McMahon To Do Something Very Weird

Former NXT coach Scotty 2 Hotty revealed that in the transition to NXT 2.0, Vince McMahon asked the staff to dye their hair to look younger.

NXT star WALTER was renamed Gunther on this week's NXT 2.0, but it appears WWE might be changing that due to who else shares that name.

Yellowjackets star Samantha Hanratty openly discussing her bisexuality & her place in the LGBTQIA+ community matters in so many ways.

The official trailer for Netflix's Murderville provides us with a look at how our celebrity guests are handling the mystery & absurdity.

Josh Duhamel has been tapped to take over for the exiting Emilio Estevez in the second season of Disney+'s The Mighty Ducks: Game Changers.