FOX's The Great North season two introduced a new hilarious fear of mine in Noodie a mascot for a restaurant ham tries out for school in the seventh episode. But more than that, my fear is giving out any major spoilers to those who have yet to watch the episode, so turn back now or I'll send the noodle mascot after you.

Ham and Judy take part in trying out different careers as a part of a school-related project looking at potential jobs they may like in the future. While Judy works alongside Gill at the local paper, attempting to get a shot at finding a story to write about, Ham works at a local Italian restaurant as a busboy but finds out a dark secret of the owners while cleaning dishes. The Poppa character in The Great North is so sweet at first and then turns incredibly creepy but in the best way, sort of, with lines like "some Poppa on your plate" that you have to double back and think about a second time. Ham loves the job but then things turn mafia-like and as if trapped in a nightmare of noodle hallucinations when he realizes that both Momma and Poppa are basically gross as hell when they use recycled noodles from leftover plates, rinse, and serve, similar to the salads. Chaos begins as Ham tells Judy about it all and they try and get the scoop out there for people to find the weird noodle truth.

The Great North not only had a great main story, with a noddle mascot whose eyes will haunt me till the day I die, but it also explored Moose's growing pains in his crush on Bethany as she works on Beef's boat for the week. There was something calming and comforting about this odd story. Things flowed really well, although I'd love a little more screen time of Judy and Gill though that will have to be for some other episode… and personally, I can't wait. Character development and originality go hand in hand in this episode, bringing personality from a majority of the characters in a way that doesn't overcrowd anything. It's an odd and loveable episode I could see myself re-watching in the future, and that in itself is a big compliment. 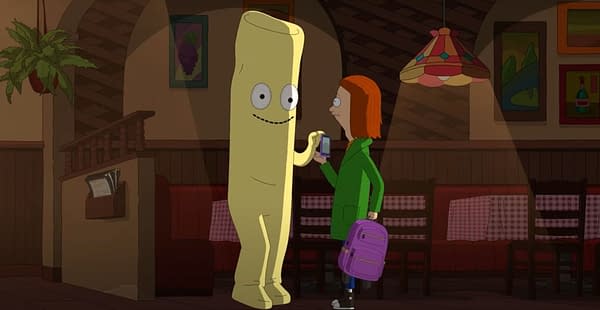 Review by Brittney Bender
9.5/10
FOX's The Great North went noodles and had a lot of fun with this episode, giving and lifting expectations on Ham's character and the way the family works together.
Credits
Network
FOX

WWE responded to Sasha Banks and Naomi walking out on Monday's RAW by suspending the two indefinitely and removing their merchandise.

SmackDown Recap 5/20: Who Are The Unified Tag Champions?

Our recap of this week's WWE SmackDown on FOX, where RK-Bro faced The Usos to unify both Raw and SmackDown's Tag Team Championships.

The Stranger Things 4 cast offers personal takes as they recap the first three seasons; the Duffer Bros explain why this season is so huge.