The Great North joined the Holiday forces behind FOX's Animation Domination lineup with their eighth episode of the second season, "Good Beef Hunting Adventure". As per usual, turn back now unless you're ok with spoilers… you have been warned!

Tradition arrived with the turkey for the Tobin kids and Honeybee on the recent The Great North episode, in something known as "The Beef Hunt". When Honeybee and Wolf's toilet goes wacky, they stay over in the main house with the rest of the family for Thanksgiving week. While Judy works to memorize an insane poem, Ham tries to make something for Crispin and his family to eat, Moon tries to connect and have fun with any of his siblings, and Wolf goes overboard with cleaning, things get tense. Beef tries to control the tense and riled up Tobin kids, but at first, there's not much success. It reminds me of the privacy I find myself seeking when visiting family over the holidays where a noisy atmosphere can end up being a mild description.

On a rare "Beef Hunt", the Tobin kids and Honeybee go in search of pieces of the competition to complete, meanwhile Beef attempts to fix the broken toilet in the guest house. The challenges, from eating a ton of cranberry sauce to answering personal trivia questions, were all fantastic to watch along with the celebrity references. A lot of fun memories were revealed as the kids went through clues with one another. It was really sweet and refreshing to see all the Tobin kids together on a little journey, one that felt unique and connected to the personality of the show. While the majority of this episode of The Great North was fun to watch, the entire storyline of Beef fixing the toilet and overcoming the fear of them felt out of place. It was a great addition at first, but it could have been more of a variety of things instead of a majority of time spent with the broken toilet. In any case, the fun challenges they went through made the episode worth watching ahead of Thanksgiving and the Holiday season. Lastly, I now want to know what Moon got to say at the meal as his curse word. 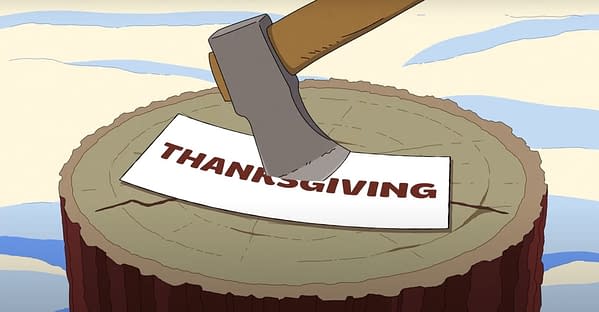 Review by Brittney Bender
8/10
Overall, this episode of FOX's The Great North revealed a lot of fun memories for the Tobin family along with some great writing. The only part lacking substance were the scenes going back to focus on Beef's toilet debacle.
Credits
Network
FOX