When Undisputed WWE Universal Champion Roman Reigns appeared on the post-WrestleMania episode of SmackDown, he ordered his cousins The Usos to follow his lead by unifying the Raw and SmackDown Tag Team titles.  We haven't seen Reigns since that night and with WrestleMania Backlash just around the corner, fans are wondering if the Champ will even have a match at the event, or if he's on the Brock Lesnar schedule now?  Did we find out these answers on SmackDown on FOX this week?  Let's find out.

We open the show with a contract signing between SmackDown Women's Champion Charlotte Flair and Ronda Rousey for their "I Quit!" Match at WrestleMania Backlash.  As you can imagine, this is just as bad as their contract signing segment before WrestleMania last month.  There's an added element of obnoxiousness in this one though, as Drew Gulak is involved for "comedic" effect.

The two women jaw back and forth, with Rousey literally mumbling into the mic and her words being completely inaudible at times.  This woman is a lost cause and they really need to move on from her.  Anyway, they do their schtick, sign the contract, destroy the table, and fight with a kendo stick.  Oh, and Rousey beats up poor Gulak for good measure.

A very solid slugfest of a match here to open the actual wrestling action on SmackDown.  Woods is able to sneak the win with the Backwoods for the pinfall.

After the match, Butch rages and dives into the crowd to assault a security guy on his way to the back.

We next go backstage to find Intercontinental Champion Ricochet chatting with Aliyahuntil they're interrupted by Jinder Mahal and Shanky and Ricochet is challenged by the big man for a title match.

Goodz is the poor local talent assigned to be Gunther's victim on SmackDown this week.  Gunther plays with him for a couple of minutes before planting him with a big Powerbomb for the pinfall.

We now go backstage to find Riddle and Randy Orton discussing plans for Riddle's match tonight when they're confronted by Drew McIntyre.  Orton and McIntyre bury the hatchet and we learn RK-Bro will be lumberjacks for McIntyre's match with Sami Zayn tonight.

We then get a perplexing promo from Xia Li (hey remember her?!) where she pretty much announces she's a heel now.  Ok then.

A pretty good match here with some fun twists and turns as it goes.  Eventually, Uso goes for the Diving Splash from the top rope, but Riddle gets his knees up to block and turns it into an Inside Cradle for the pinfall.

The SmackDown Women's Tag Team Champions Sasha Banks and Naomi hit the ring now for an interview, but are confronted by Natalya and Shayna Baszler.  They trade some trash talk before a title match is set.

Next, we go backstage to find Madcap Moss being confronted by Happy Corbin, who tries to make amends with his former sidekick, but Moss insults him instead.

We next get a hype package for Raquel Rodriguez, where they show all of her work in NXT, even though they felt the need to change her name and character from what she had on that brand.  There's some logic for you!

A quick forgettable match here that ends when Moss plants Angel with the Punchline for the pinfall.

After the match, Corbin storms the ring and beats up Moss.  He then steals Moss's Andre The Giant trophy and walks off.

Next, Sami Zayn enters The Bloodline's locker room and sucks up to Roman Reigns, and informs him that RK-Bro will be involved in the Lumberjack Match and that he heard them say bad things about their family.  He then asks for Reigns' help in his match tonight and offers to help him in return.

So, next, we get another depressing story about the hard life of Lacey Evans.  Guys, I don't even know what to say about this anymore.  This is just too much heavy real-world stuff and I really don't think fans are going to react to this the way they think they will.  Yikes.

Superstars, including Raw Tag Team Champions RK-Bro and SmackDown Tag Team Champions The Usos, surround the ring as McIntyre and Zayn battle it out for the third week in a row.  The Usos take out RK-Bro at ringside before the babyfaces and heels all start fighting.  McIntyre ends the donnybrook by taking them all out with a dive from the ring.

This gives Zayn the opportunity to again, run away through the crowd.  This brings out Adam Pierce, who announces that next week, Zayn will face McIntyre in a Steel Cage Match.  Jinder Mahal and Shanky then run in to beat up McIntyre, but he fights back and takes them out as SmackDown ends.

And that's that for another pretty pointless episode of SmackDown on FOX.  Reigns made pretty much a cameo and they did absolutely nothing to further his situation only two weeks away from a Pay Per View event.  But that was the theme of the night I guess, as they spun the tires with pretty much everyone else too, which to me basically is them telling the audience they're wasting their time watching.  Not good. 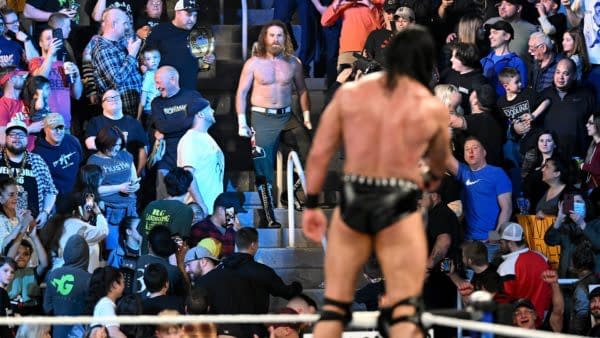 Review by Ryan Fassett
2/10
A couple of pretty good matches this week, but overall, this episode felt like a total waste of time as they did nothing to further or establish any storylines/characters and the super Champion Roman Reigns only made the briefest of cameos and still has no story right now.

As the road to 10 million Warrior Nun tweets rolls on, Simon Barry shared a look at the billboard in NYC from the #SaveWarriorNun campaign.

The Chadster should be enjoying another happy Groundhog Day, but thanks to Tony Khan and AEW Dynamite, another thing The Chadster loves is ruined.