Every once in a while, a project comes along with such an intriguing high concept that it jams itself between some of your neurons and refuses to be evicted. Eight Billion Genies #1 is like that, creating a hapless ensemble cast thrown into a harrowing and chaotic situation.

The Lampwick Bar & Grill is a third-rate dive in St. Clair Shores, Michigan, that "hasn't seen a crowd since 1983." Will Williams is the bar's grizzled owner and bartender, who speaks perfect Chinese (the book doesn't indicate whether it's Mandarin or Cantonese) and has the kind of calm certainty of someone who has seen things one cannot unsee. On a Tuesday night, we look in at the Lampwick, an equally third-rate band called the Bada Bangs are scheduled to play a show while a young boy named Robbie tries to bring his passed-out dad home for the boy's twelfth birthday, and various other visitors work their way through their own narratives. One could base an entire character study around this set of random people, but then it gets weird.

Out of nowhere, all over the world, every person has a magical floating creature appear with the same message in whatever language the person speaks (even a newborn in Paris without the capacity for language yet): "Every person on earth now has a genie. I am yours. You will receive one wish. Not three. One. You may wish for anything you like. Be careful when you make your wish. For your intention will be reflected in how it's fulfilled. Now … what can I do for you?"

That prompt alone contextualizes everything in this Charles Soule script. The visual storytelling from Ryan Browne, Kevin Knipstein, and Chris Crank depicts this story in the tones of every day suddenly injected with the impossible.

At this point, as noted in the work, "anything can happen," so there's no telling if this is the beginning of a masterpiece or a single scene of brilliance. For the here and now, you won't be able to wish this haunting concept away. RATING: BUY.

Eight Billion Genies #1
By Charles Soule, Ryan Browne
SERIES PREMIERE If you had one wishwhat would you wish for? Now, what if everyone else had one wish too? That's EIGHT BILLION GENIES, the new eight-issue series from CHARLES SOULE & RYAN BROWNE (CURSE WORDS). At exactly the same moment, everyone on earth gets a genie and one wish. All hell breaks loose, in a very entertaining wayand that's just the beginning. Buckle in for the wildest ride of the year! 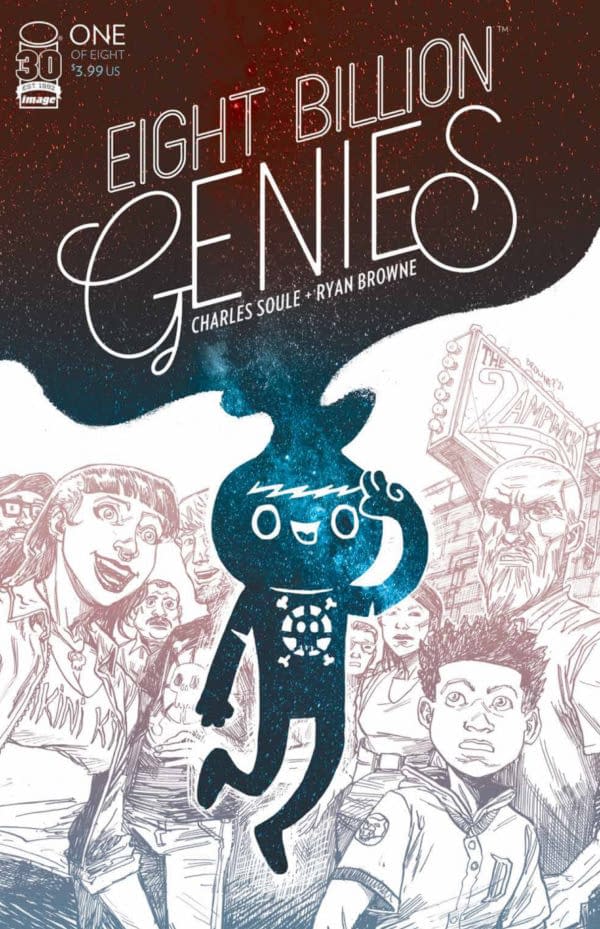 Review by Hannibal Tabu
8/10
"Be careful what you wish for" manifests itself in a small town in Michigan as the whole world has to deal with the consequences.