In Grim #2, Jessica Harrow (the only reaper who doesn't know how she died) is lost. She's stuck between the living and the dead and needs the help of her friends to get more information. None of her superiors are particularly forthcoming, so Jessica & Co. plan a heist.

Artist Flaviano and colorist Rico Renzi steal the proverbial show in Grim #2 in two scenes, the first in Mexico City for the Day Of The Dead and the second in the records room of the hall of the afterlife. There are riotous yellows, pinks, and purples in the air in Mexico City that made me do a double take. Writer Dr. Stephanie Phillips takes to heart the idea that locations should be visually interesting, and the art team of Flaviano and Renzi are always up to the challenge. Speaking of up to the challenge, there's a mashup word balloon from Tom Napolitano that does a great job of showing Jessica's anger dissipating midway through a sentence.

Rich notes that sales are all the way up for Grim, and speculators notwithstanding, it's for a good reason: The comic is good and feels fresh. If Grim can keep up the quality bar maintained by Grim #2, Boom just might have a reliable hit on its hands. Boom hosts a preview of Grim #2 on its website, which includes all of the variant covers for the issue.

Jessica Harrow finds herself trapped between the worlds of the living and the dead—something that no other reaper has ever experienced! Just what makes her so special? Can she make her way back to the afterlife, and what exactly is going to happen now that she can walk amongst the living? The mystery deepens in this new series from acclaimed writer Stephanie Phillips (Harley Quinn) and fan-favorite artist Flaviano (New Mutants)! 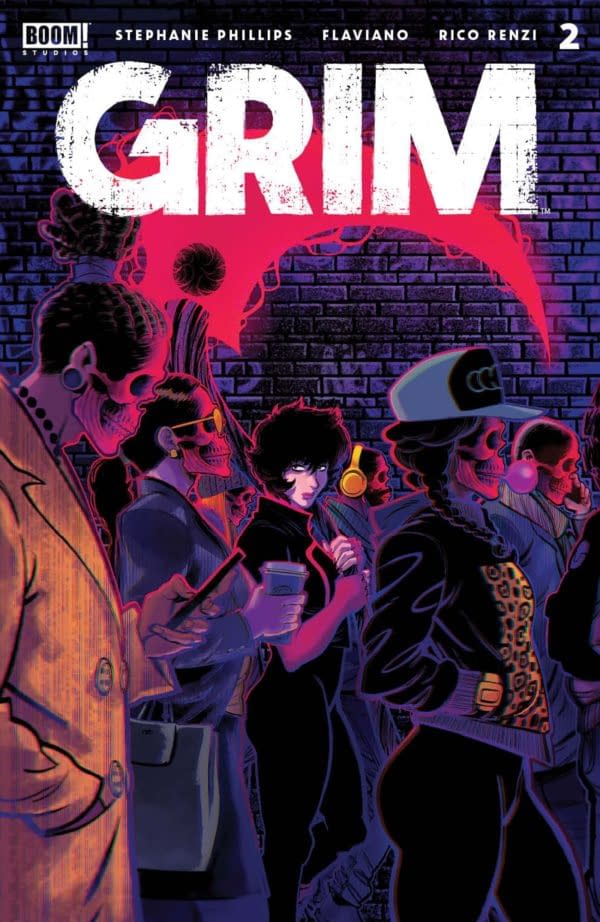 Review by James Hepplewhite
6.5/10
In Grim #2, Jessica Harrow (the only reaper who doesn’t know how she died) is lost. She’s stuck between the living and the dead and needs the help of her friends to get more information.
Credits
Writer
Dr. Stephanie Phillips
Artist
Flaviano
Colorist
Rico Renzi
Letterer
Tom Napolitano