Oh. Oh, no. All right, well, in the immortal words of the philosopher Alvin Joiner, "it all comes down to this," as the winding and worrisome King in Black crossover comes to an ending with King in Black #5 that is needlessly overwrought and largely unimportant.

This final (hopefully) issue posits the possibility that everything that has happened in every previous issue, every tie-in, and every offhanded reference didn't matter as much as a hill of beans. The works and machinations of Avengers, X-Men, gods, and heroes … pfah. It's all unimportant as a symbiote from an earlier age (which was too short and too undeveloped a twist to build on itself) steps forth and kind of just marches through wildly implausible symbolic gestures (Paul Bettany knows what we're talking about here) to literally ignore a poster-worthy assemblage of heroes to take on the god of symbiotes and paper-thin motivations, Knull.

There's not a lot to say here. Ryan Stegman, JP Mayer, Frank Martin, Jason Keith,  and Clayton Cowles all showed up for work and did the best one could do with white text on a red background or white text on a black background (truly an accessibility nightmare, don't call the Section 508 crowd) and the goopy, ragged edges of sacks of space goo. No, alas, this cliched (click for a spoiler if you must) "you kill it, you bought it" challenge is in the hands of the script from Donny Cates and whatever editorial guidance he received, invalidating every previous page in an abrupt and overpowered finale.

Much like The Rise of Skywalker, it's over, and that's something at least. Let's never speak of this again, shall we? RATING: NO. JUST … NO.

King In Black #5
By Donny Cates, Ryan Stegman
WHAT'S A GOD TO A NONBELIEVER? 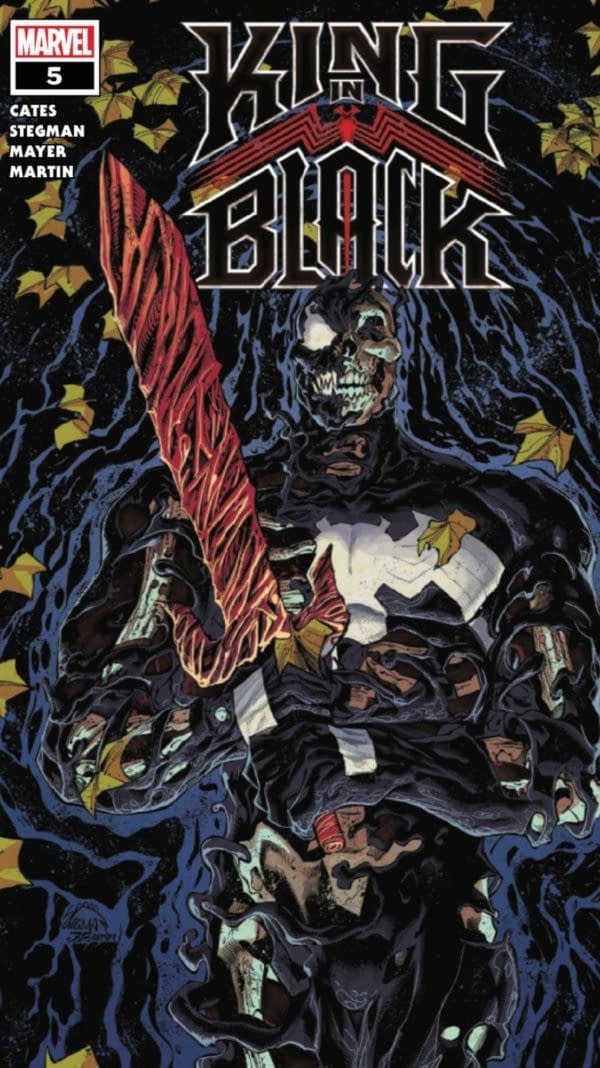 Review by Hannibal Tabu
3/10
Well ... at least it's over. Hopefully, we will never have to hear the name or think about Knull again. Guh.
Credits
D
D
J
J
A
A
N
N
M
M