With much more action than the previous issue, the latest person to hold the titular mantle of Mister Miracle has some rather outside of context problems to address as he struggles to maintain his career as an escape artist, his privacy as a person, and his very life.

There are some kinds of omniversal shenanigans going on here as N'vir Free, the only daughter of Scott and Barda (apparently not Jacob's sister), believes killing Shilo Norman will make things right with the Mister Miracle legacy. However, Shilo has a Mother Box that has said it has "no record of N'vir Free, her allies or her parents, Scott and Barda Free." Looking back, there was never any indication that he existed on a planet with the heroes we know, so perhaps this is indeed a slice of the possible worlds where he picked up the mantle directly from Thaddeus Brown, doesn't know the New Gods or any of that. Weird flex, but possible. Interesting to consider Scott Free may, indeed, be the usurper of the legacy.

If this is in case a self-enclosed continuity being intruded upon by N'vir Free, writer Brandon Easton does a solid job of presenting the Mister Miracle legacy as something Norman guards as closely as he does his identity. From the introspection on the 101 Freeway (great moment) to the very believable slice of life media clippings, this issue has a great grasp on the characters here. Likewise, the visual storytelling from Pico Ossio, Rico Renzi, and Rob Leigh does a great job of showing some parts of the City of Angels as well as far-flung locales like the Australian outback as well.

There's enough muddling with continuities to raise a lot of questions as to where this sits in relation to other DC properties (the New Gods most of all, since the Mother Box here knows what the Source and Boom Tubes are and has some familiar answers alongside some Kirby-tastic flourishes) but especially for neophyte readers, this delivers a lot of good material and relatable moments. RATING: HONORABLE MENTION.

Mister Miracle #2: The Source of Freedom
By Brandon Easton, Pico Ossio
After the shocking events of issue #1, Shilo is suddenly on the run from a powerful new enemy who believes the Mister Miracle mantle belongs to them. With his career in shambles, his apartment destroyed, and no real understanding of what's happening, Shilo must fight his way out of an unwinnable situation and track down secrets held by his mentor and friend, the first Mister Miracle, Thaddeus Brown!

Mister Miracle The Source Of Freedom #2 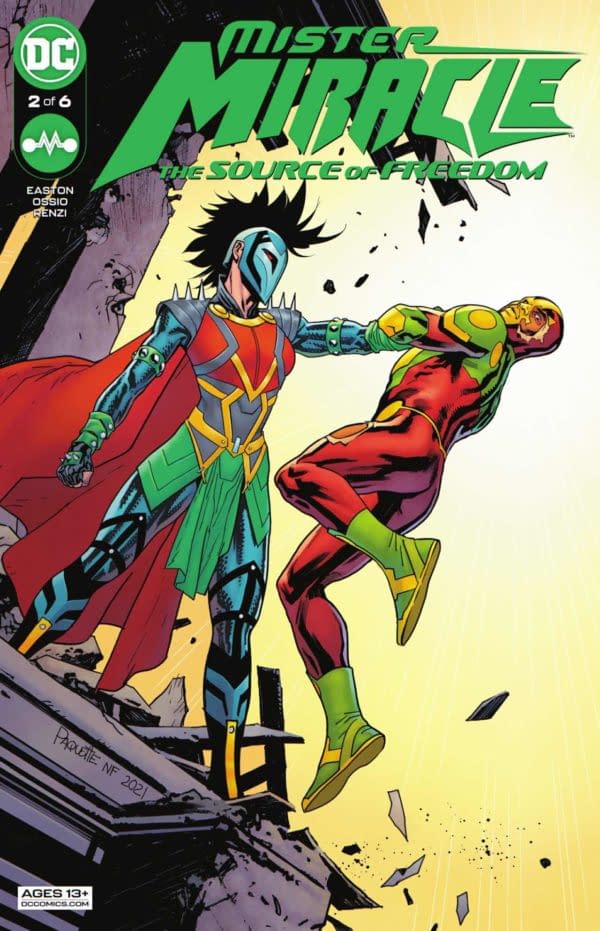 Review by Hannibal Tabu
7.5/10
With multiversal madness and issues of identity front and center, Shilo Norman may blur lines about continuity but delivers on story.
Credits
B
B
R
R
J
J
D
D

Batgirl gives Killer Moth an inferiority complex in this preview of Batman: Knightwatch #4, in stores Tuesday from DC Comics.