Neither especially good nor bad, the reading experience of Shang-Chi And The Ten Rings #1 is as if someone said, "produce a generic comic book," and the order was faithfully executed. It's not as if writer Gene Luen Yang is a bad writer or journeyman artist Marcus To is a bad artist. They've both done good work independent of each other. Shang-Chi And The Ten Rings #1 just doesn't distinguish itself.

The only time Shang-Chi And The Ten Rings #1 surprised me was when one of the goons turned out to be an evil Mega Man. Now, for copyright reasons, Marvel can't use evil Mega Man, but it's kinda difficult to argue that "person with a cannon for an arm" isn't at least heavily inspired. The page turns from six to seven, where at the bottom of six, there's supposed to be a portal to To Ta Lo, but upon the page turn to the top of seven, the reader discovers there isn't a portal anymore, is a nice moment.

Shang-Chi And The Ten Rings #1 isn't bad, and some panels of Marcus To drawing kung fu are fun, but there wasn't a spark or a surprise. Not for me, this reviewer supposes. We host a preview of the comic here. Surprisingly, no snarky commentary from Jude or the preview bot. Maybe next time.

A BOLD NEW ERA STARTS HERE! Shang-Chi has gained possession of the powerful Ten Rings. But so much concentrated energy has not gone unnoticed. Now, every bounty hunter, assassin and evil syndicate in the Marvel Universe is coming to take the Rings from him! But will the responsibility and the truth of the Rings be too much to bear for the Master of Kung Fu? Find out as the true origin of the Ten Rings starts here from Gene Luen Yang (SHANG-CHI) and Marcus To (EXCALIBUR)!

Shang-Chi And The Ten Rings #1 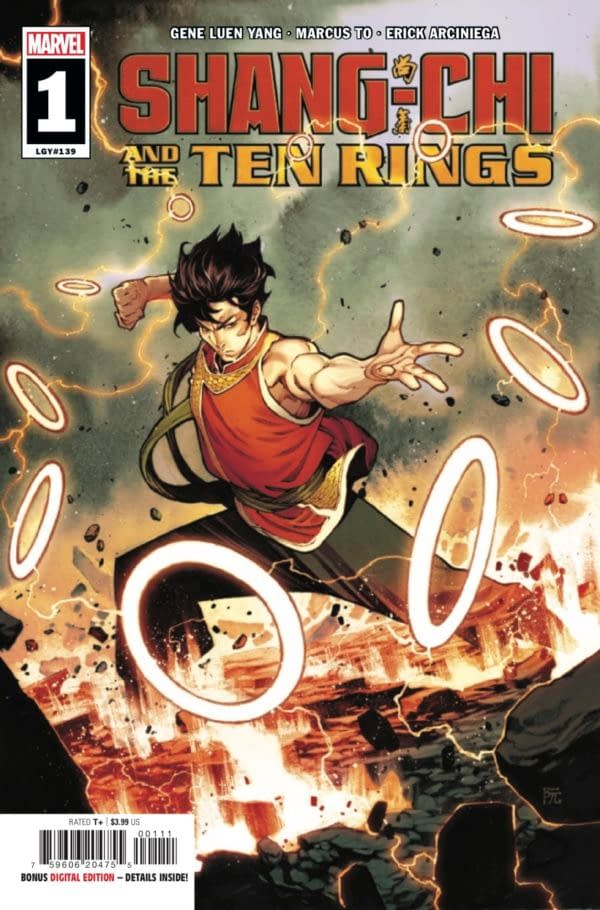 Detective Comics #1063 Preview: Every Time He Thinks He's Out…

Harvey Dent has escaped the criminal underworld of Gotham City in this preview of Detective Comics #1063. Batman wants to drag him back in.

Would you dare give Moon Knight a Grande Quad Nonfat One-Pump Mocha Upside Down... and forget to hold the whip? Preview Damage Control #1.