With 15 games over a 20-year franchise, Halo Infinite already had a ton of expectations thrown onto it the minute it was announced. Especially after Halo 5 failed to meet a number of expectations from longtime fans and the few games released since then have primarily been for fun and entertainment in different ways rather than forming a true sequel. Aside from working on this latest game, 343 Industries has been making the Master Chief Collection pop in the six years between titles, reminding everyone of what they and Bungie had forged over the years. So for those of us who are longtime fans, we've had a clear reminder of what Halo once was from the best to the worst in the two years leading up to this release. So how does Halo Infinite hold up both as its own game and as part of the series?

The story takes us to the Zeta Halo where, after being rescued from floating in stasis in the middle of space, Master Chief is essentially on the warpath to avenge the loss of the UNSC Infinity being attacked by The Banished. Near the beginning of your mission you find The Weapon, an AI who was assigned to contain Cortana for deletion, but for some reason failed to delete herself after her task was completed. Armed with a new AI in your head and with the focus of destroying the armies of the Banished's leader Atriox, you head off on what would be a suicide mission for most. But for John-117, it's just another day. The story that we played through is probably one of the more in-depth that have been presented in the franchise and doesn't feel like a quick throwaway or a piece of duct tape to keep a campaign mode attached to what has essentially been a Multiplayer FPS title for two decades. The team took their time this time around to craft something of value that draws you in and makes you want to play it more to get all the way through to the end.

The best additions to this game are by far the open-world and the grappling hook. First, the world, which for the longest time in Halo would occasionally comes off as a slow rail shooter. Paths used to be heavily defined with very little going off the beaten path before you ran into a wall that stretched 10 miles high as if to say "no, the story is this way." Now you have options aplenty to do what you feel like in many ways, whether that be going toe-to-toe against the many intriguing boss battles, saving fellow UNSC soldiers, taking out enemy targets, reclaiming bases, or a dozen other tasks in the game. A lot of Halo Infinite feels super familiar, and it should, as it feels like they've taken the best elements from Halo 1-3 and combined them with some new tricks to make the open-world experience amazing. There is one downside, and that's repetitiveness. Everything pretty much looks the same. Compared to previous titles where there was at least a snow level, or other open-world games where there's different weather and climates, it all looks like an alien version of the Rocky Mountains between Spring and Summer until you go indoors. Some variety would have been nice.

Speaking of new tricks, that grappling hook is by far one of the greatest additions to the franchise you'll ever see. Save yourself from falling, grab weapons from afar, hook objects or enemies to create impressive combos of shooter glory, or just look cool as you're shooting up enemies. Once you're used to it, you'll wonder why we didn't get this addition ten years ago. Another aspect of the game that will keep you busy is reclaiming bases, which in a way acts like the waypoint features you run into in many games where once you control an area, more stuff opens up. The same can be said for Halo Infinite where you branch out options in the world based on what you manage to unlock at certain points in time. So if you want more of that open world, you have to go unlock it. You also get a ton of weapon upgrades throughout the game that will make you a force to be reckoned with, both in personal armaments but in vehicles that will come in handy for just about everything. If you manage to unlock everything early enough, navigating the world will be a piece of cake and boss battles will be a breeze with new abilities you have learned.

The big topic, of course, is multiplayer. We're not going to spend forever and a day discussing this though, because there are 5,000+ other people out there telling you what they love and hate about it. So I'm just going to sum up the multiplayer as best I can. This is about as robust of a system they have ever created, giving you hundreds of options for armor and customization to make your character look and feel original compared to everything else on the battlefield. You are giving dozens of options of gameplay ranging from single-player games to show dominance to team games where you and friends can flex your skills together, to massive community battles where it doesn't matter how great or terrible you are, it's all for fun. This is the multiplayer experience I have been wishing for since Halo 3, and with all due respect to 4 and 5, it is the very best that 343 Industries have created to date. Aside from the occasional server issue or lag, I have zero complaints about it and if not for the need to eat and sleep, I'd spend entire days in the middle of the mayhem.

Overall, Halo Infinite was the Halo game we needed. Fans of the series are getting practically everything they've ever wanted out of this, and with a few exceptions of additions that will be coming down the road, it's about as complete an experience as you'll ever get. The series will always have its naysayers as they prefer a different FPS title over this one, and purists who will say anything not made by Bungie isn't a Halo game. But the reality is Halo Infinite not only blew expectations for us out of the water, but it also amazed us with everything it could as the team delivered on multiple levels. This may be the best Halo game of all time, and if not, it's one hell of a competitor to be in the conversation. 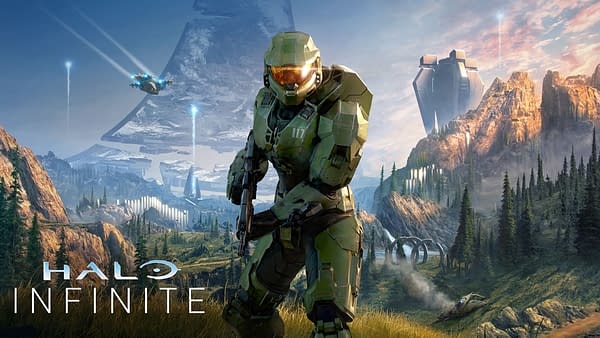 DON'T NOD Entertainment has released a new video for Gerda: A Flame In Winter this week, showing off more of the gameplay.

Nintendo Releases A Ton of Information About Splatoon 3

This morning, Nintendo held a special Splatoon 3 Direct video going over the game, and we learned a lot about this upcoming sequel.

SEGA dropped some new content on Demon Slayer -Kimetsu no Yaiba- The Hinokami Chronicles as players have a new Character DLC.

Pokémon TCG Japan's next set Incandescent Arcana will give the Ultra Rare treatment to the Fire-type Dragon of Unova, with Reshiram V.

Niantic has finally announced details for Pokémon GO Fest: Finale. Read on to see how you can catch Ultra Beasts and Sky Forme Shaymin.