Recently, I watched the Muppets Haunted Mansion special on Disney+, and with most of my expectations met there were still highs and lows with it overall. Don't get confused, the lows were rare and the highs were plenty. Spoilers are ahead, so turn back now… foolish mortals!

From the beginning the aesthetic, well truly the general vibe, was great because it connected you to that seasonal feeling that only comes with the fall and Halloween. On their way to the mansion to test their luck in a fear-filled challenge, Gonzo and Pepé reach out to Kermit over the phone and converse with their friends. I was so in my element, I mean Pepé is one of my favorite Muppet characters, but I felt taken out of it as soon as I heard Kermit speak. It was a deeper voice and it felt just generally off.

If Kermit were featured more in the special than he was, I would have had a lower rating in the end. Uneven voice acting for a Muppet character has the unfair potential of throwing off the others in the scene. It sucks to say I'm glad he wasn't in it for the long haul; or when he was, it contained singing that masked the voice work and that's the reality of it. Besides that, the only issue I found with Muppets Haunted Mansion was in the one musical number between Constance & Pepé. The sound mixing was off incredibly so that you could barely hear Taraji P. Henson's beautiful singing voice. Aside from that, the musical number was incredible with fun acting on Henson's part as well as the Muppets involved.

Now don't be afraid, the majority of this special was a lot of fun to watch and it genuinely helped me dive further into the spooky spirit of the season. From the hilarious yet intense jump scares of the possessed goat Muppet to the husky rat in the room of Madame Pigota, the jokes and impressive attention to detail made it all fantastic. The props and set design were so much fun to witness on screen. Wallpaper featured faces, plants came to life, and at one point the Swedish Chef ran around at Kermit's party with a chainsaw. Muppets Haunted Mansion (and the Muppets, in general) was a fantastic return-to-form for the Muppets, a reminder of past film & television projects' high-notes. I hope more of these holiday & seasonal specials like Muppets Haunted Mansion continue because it's an awesome association to have between them and a favorite time of the year. But maybe a different voice for Kermit next time? 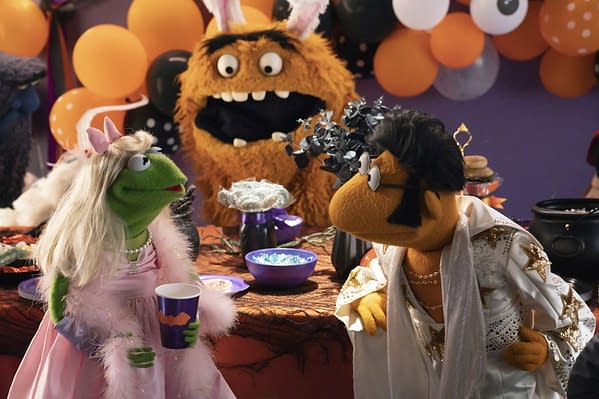 Review by Brittney Bender
8/10
While so many parts of the Muppets Haunted Mansion made Disney+ a place to be for fun Halloween content, there were some parts that missed the mark. What could have been a perfect spooky special, was interrupted by poor casting for Kermit and some issues occasionally with sound mixing. But overall, Muppets Haunted Mansion was a fantastic return-to-form for the Muppets, a reminder of past film & television projects' high-notes. I hope more of these holiday & seasonal specials like Muppets Haunted Mansion continue because it's an awesome association to have between them and a favorite time of the year.
Credits
Platform
Disney+

James Gunn made it crystal clear that when it comes to gorillas, the door is always open at DC Studios... and the more, the merrier!

The Lord of the Rings: The Rings of Power Adds 8 More to Season 2 Cast

Amazon's The Lord of the Rings: The Rings of Power has cast Oliver Alvin-Wilson, Stuart Bowman, Gavi Singh Chera & more for the second season.

Google shared its 2022 Year in Search intel on TV/streaming, with HBO's Euphoria & Netflix's Stranger Things scoring big but that's not all!