More than two decades after they feuded in WCW, Chris Jericho and Juventud Guererro faced off in the third Labor of Jericho. Jericho won the match with a Judas Effect off the top rope, as MJF stipulated the match could only be won with a top-rope maneuver. Afterward, Wardlow attacked both The Juice and Jericho, as MJF revealed Wardlow will be Jericho's fourth labor, with the stipulation of MJF himself as special guest referee.

Does The Chadster even need to tell you how unfair all of this is to WWE? Where was Juventud Guererro for all those years? Just waiting around for two decades for the chance to screw WWE by appearing on AEW Dynamite? And where does AEW get off building anticipation for a match between MJF and Chris Jericho without having them face each other in the ring every week for two months? That's just not how it's supposed to be done. Augh!

Backstage, Andrade El Idolo screwed up Pac's travel plans so he could try to get the Lucha Bros to work for him again, but they refused. Then Hangman Page told The Dark Order that they needed to go their separate ways for now so that he could handle his problems with The Elite on his own.

Jon Moxley, Eddie Kingston, and Darby Allin defeated Daniel Garcia and… what the heck?! That's EVer-Rise, from The Chadster's beloved NXT! Is there no depth Tony Khan won't sink to in his quest to personally ruin The Chadster's life? Poaching talent from NXT that The Chadster didn't even realize WWE had fired is just not cool, Tony Khan. Why are you doing this to The Chadster?!

After the match, Kingston delighted in posing with Sting, pointing to him and mouthing a bad word to the camera. The Chadster hopes AEW gets fined by the FCC for that.

Christian Cage beat The Blade clean in a match despite The Bunny being at ringside and trying to help The Blade cheat with brass knuckles. Christian did have a little help from Legit Leyla Hirsch in neutralizing The Bunny, who was set to face Hirsch later in the show. It's extremely disrespectful of Tony Khan to keep booking Christian to win matches like this when WWE didn't even think Christian should be allowed to wrestle. What makes you think you know better than Vince McMahon, Tony Khan? So arrogant.

Backstage, Dax Harwood cut a promo on Proud and Powerful after their match last week was cut short by an injury to Cash Wheeler. If this was WWE, Harwood would be off TV for months while Wheeler recovered and Proud and Powerful would be chasing the 24/7 championship, so it's really jarring to see AEW handle things this way, but The Chadster has come to expect these sorts of shenanigans from Tony Khan at this point. Sad.

Red Velvet interrupted a Britt Baker promo to challenge her to a match at AEW Rampage next week, which Baker accepted. Red Velvet ended up getting jumped, which is how The Chadster feels right now thinking about the fact that Baker's boyfriend, Adam Cole, could end up in AEW after SummerSlam since he's currently working without a contract. If The Chadster was Adam Cole, he'd dump Britt Baker right away and find someone WWE-approved to date instead. Maybe Nia Jax, who's free now that Reggie has moved on.

Backstage, Chavo Guerrero brought Fuego del Sol to get his butt kicked by Andrade El Idolo because the Lucha Bros refused to work for him. The Chadster doesn't get why Andrade is so pompous when he could barely even get wins on WWE Raw when he was teamed up with Angel Garza. Andrade should stay in his lane, but these AEW wrestlers have no respect for the business. Charlotte: please dump him. Maybe you could get with Adam Cole instead and convince him to stay in WWE.

The Elite jumped Hangman Adam Page when he tried to cut a promo in the ring. The Dark Order started to intervene, but, respecting Page's wishes that they let him handle his business on his own, Evil Uno and Stu Grayson stopped them and Page was left to be decimated, as he deserves for getting over with the crowd. Unfortunately, since Tony Khan doesn't understand wrestling, this will probably lead to Page getting put over in the long run. Gross.

In a video promo, Dan Lambert said he's coming back to AEW next week and bringing backup from his MMA team to get revenge on Lance Archer. The Chadster agreed with every bad thing Lambert said about AEW when he was on last, so this is one AEW segment The Chadster is actually excited for.

Though Lee Johnson fought valiantly, he was ultimately crushed by Miro in a TNT Championship defense. The Chadster heard that Miro arranged an early screening of Suicide Squad for the AEW roster, and that's so disrespectful. If anything, the only reason Miro got a role in that movie is because he was famous from WWE, so if anything, he should have done the screening for Vince McMahon and the WWE roster. But Miro, like his boss Tony Khan, simply doesn't respect wrestling or the people who paved the way for the success he enjoys today. It's a real shame.

Backstage, Christian Cage cut a promo about being the number one contender and he sang the Golden Girls theme. The Golden Girls is The Chadster's favorite show, so this one really hit The Chadster where it hurt. Did Tony Khan buy the rights to this song too? Augh!

Leyla Hirsch beat The Bunny to earn a shot at NWA Women's Champion Kamille. More collusion between AEW and another wrestling company to screw over WWE. Not surprising at this point, but The Chadster is still hurt by it. The Chadster hopes you're happy, Tony Khan.

Backstage, Mark Sterling and Jade Cargill said Cargill is coming back to wrestle again next week on AEW Dark Elevation. Cargill said her catchphrase, which contains a cuss word, so The Chadster won't repeat it here. Needless to say, The Chadster was disgusted.

Cody Rhodes got knocked out by Malachai Black in the main event of AEW Dynamite Homecoming.

After the match, Cody started to give a retirement speech, but Black attacked him before he could finish. What the heck, Malachai Black?! You should have let Cody retire. That would be one less popular babyface to help AEW compete with WWE. Now these two are going to feud some more and the crowd will get behind Cody and AEW will get more ratings and AAUUUGGGH! It's just not fair!

AEW Dynamite Homecoming should have been a down week after several hot shows in a row since AEW went back on tour, but instead they ended up putting on a good show that advanced several major feuds ahead of the debut of Rampage next week and the likely debut of CM Punk in two weeks. One thing for sure is that AEW is on a role, and it drives The Chadster absolutely crazy because this should be WWE's moment to shine, not AEWs, but Tony Khan is stealing all of WWE's glory and also their fired former wrestlers. Does Tony Khan's disrespect for the wrestling business know no bounds?! 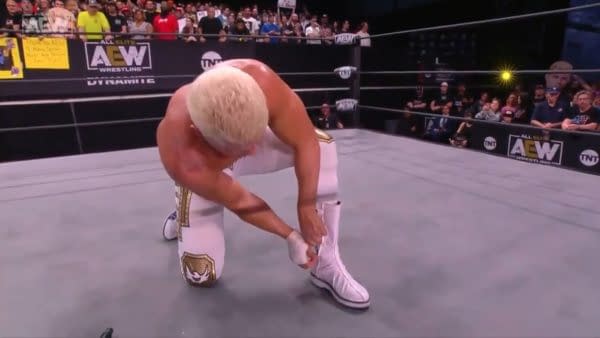 Review by Chad McMahon
7/10
AEW Dynamite Homecoming should have been a down week after several hot shows in a row since AEW went back on tour, but instead they ended up putting on a good show that advanced several major feuds ahead of the debut of Rampage next week and the likely debut of CM Punk in two weeks. One thing for sure is that AEW is on a role, and it drives The Chadster absolutely crazy because this should be WWE's moment to shine, not AEWs, but Tony Khan is stealing all of WWE's glory and also their fired former wrestlers. Does Tony Khan's disrespect for the wrestling business know no bounds?!