AMC's Kevin Can F**k Himself, season two, episode 6, gives insight into why Allison's (Annie Murphy) tendency to stall so often isn't atypical of someone in her situation. Warning, potential spoilers are ahead, so feel free to watch the episode and return if you'd like so we can dive in on this episode together.

This episode of Kevin Can F**k Himself dealt with many issues arising as characters approach the end of the series, including how we choose to be there for people in our lives. The people around Allison, like Sam (Raymond Lee), express confusion as to why it seems to be taking her so long to get things in order. When looking deeper, it's truly not a surprise, and that's what the series has done a good job at continuing to reinforce subtly. The same can be seen in Diane's (Jamie Denbo) experiences with those close to her and with Neil (Alex Bonifer).

Kevin Can F**k Himself wraps so much special attention in Diane and brings her fully into the narrative as much as any other character. She's become a mother-like figure to Allison, as she is her aunt, and her struggles aren't much different from Allison's in some ways. When Patty (Mary Hollis Inboden) says to Allison, "Fun is for people with disposable income," it reflects something so painfully accurate. Both Diane & Allison experience a life that has been seeing and believing in the comfort of complacency, bad marriages, and limited spikes in self-esteem included. Allison has become used to a world where Kevin isn't the one to depend on, or really much anyone else for that matter, but her allowance and tolerance of many types of pain hits the soul. And like her, Diane struggles with using alcohol to cope with that harsh and repressed reality.

Kevin Can F**k Himself continues to elevate the story and connect some interesting dots as a conclusion quickly approaches us. Even through deeper topics and sensitive dialogue, the series picks up on some great details in each episode. For instance, in this episode, one of Kevin's sweatshirts displays a parody of the Market Basket grocery store's logo. Having lived in various towns in Massachusetts in the past, seeing his clothing read "Mahkit Baskit" oddly made me so happy. It's the type of grocery store so prevalent in areas of MA that having a joke about it is awesome to see.  This is a series that walks the walk when representing a town and a region like New England.

Kevin Can F**k Himself Season 2 Episode 6 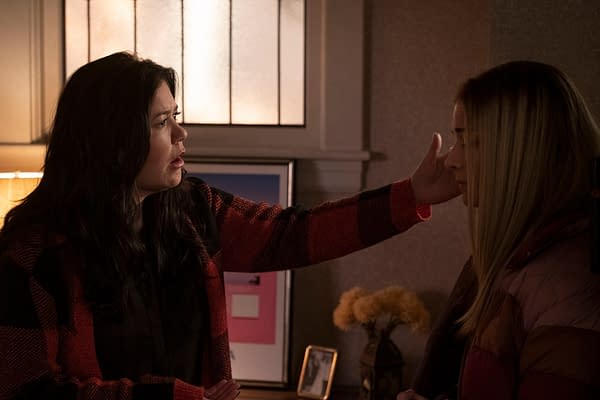 Review by Brittney Bender
10/10
AMC's Kevin Can F**k Himself Season 2 Ep. 6 "The Machine" brings in Diane's character in such a way that it reflects back the struggles Allison experiences as she attempts to move past her own doubts. The series brilliantly balances the depiction of life in Worcester, MA, and the inward struggles of these characters.
Credits
Network
AMC

First, we learn that Mike Flanagan & Trevor Macy's Intrepid Pictures was Amazon-bound. Now, Netflix is opting to not renew The Midnight Club.