Things start growing tense for many in this week's episode of Freeform's Motherland: Fort Salem, "Abomination", as some characters face hard truths. Our unit of witches is off to War College and to meet their coven. However, after discovering the source of that weird power, things might start falling apart soon. The Spree and Army find themselves in what might be the beginnings of an alliance against an even bigger bad.

Our main unit gets welcomed into War College by General Alder (Lyne Renee) and a little speech reminding them of the current horrific situation they currently find themselves in and the values and traditions to keep in mind. It was a pretty good scene that really set a tone and seemed to foreshadow some things, especially when she seems to talk to each of them about things they should not forget about– it seemed she was talking specifically about each of their strengths. I have come to like the general and I hope she turns out to be good… I still do not quite trust her yet. Though it is Tally (Jessica Sutton) who manages to break through their first hurdle and she realizes she can see sound. It seems it might not be a common thing by the way their instructor reacted. I enjoyed seeing them go through their classes; it reminded me of Harry Potter.

We get leads on the research into Raelle (Taylor Hickson) and Abigail's (Ashley Nicole Williams) new power. Turns out, it is not Abigail at all, it is just Raelle. It seems to be an effect from touching the Mycelium wall in the first season– you know, the sentient-looking thing that she connected to. This was a good seed to plant to build up tension among the unit. However, I also wish they would not fall back into these types of storylines. All of last season they were just a big bubble of angst toward one another. Especially cause I think we should be able to see them work together before making them hate each other again. That said, the scene with the talking head they retrieved from the location was freaky as shit.

Once again the weakest story this week was The Spree. I am still having major issues connecting with them because, I mean, they sucked– they cause all the bad things in the previous season and the body count was a bit too high for me to sympathize with them without even showing me any single good thing they have really done. However, having Anacostia (Demetria McKinney) joins Scylla (Amalia Holm) on her mission to spy on the movement that keeps hating on witches. That scene that took place at the location where she killed so many with the balloons during the first season was a great one. Scylla's face perfectly portrayed her conflicting emotions. I am looking forward to seeing what happens though, I can imagine things are not going to go well. So far, Motherland: Fort Salem is two-for-two. Great tone to start the season with so far. 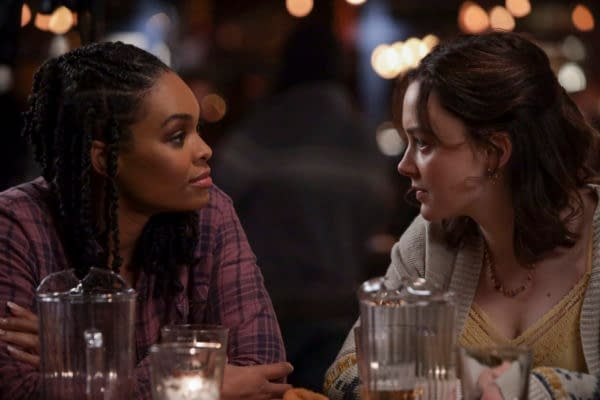 Review by Alejandra Bodden
8/10
Highlighted by the chemistry between the enemy-of-my-enemy-is-my-friend pairing of Anacostia (Demetria McKinney) and Scylla (Amalia Holm), this week's episode of Freeform's Motherland: Fort Salem continued the second season premiere's momentum by continuing to offer narratives and performances that keep viewers guessing as to where their allegiances should be placed. But we're still having a hard time feeling bad for the Spree...
Credits
Network/Streaming Service
Freeform

What We Do in the Shadows Season 3 E03 Review: Nandor Gets Twilight'd

This week's episode of What We Do in the Shadows "Gail" offers another chapter in Nandor's heartbreak while it also "out-twilights" Twilight.

What We Do in the Shadows Season 3 E02 Finds A Lovelorn Nandor: Review

FX and FX on Hulu's What We Do in the Shadows Season 3 "The Cloak of Duplication" finds a lovelorn Nandor wading into the dating pool.

While enjoyable, HBO Max's Adventure Time: Distant Lands "Wizard City" was the weakest & had me wondering why they closed out with this story.

Floribama Shore Season 4 E15 Review: Codi is Out of Control

Spoiling it for anyone who bet easy money on Gus and Jeremiah being the first to pop off, Codi picked a fight with Candace on Floribama Shore this week.

Aggretsuko Season 4 to Premiere on Netflix in December 2021

Aggretsuko, the anime about our 21st Century's spirit animal and avatar for everyone toiling in joyless, life-sucking jobs under Late Capitalism, is back,

Cats and kittens, we have a date for Tiger King 2 this fall on Netflix, mark your calendars for November 17th.

Netflix's The Witcher has been renewed for Season 3 as well as a number of new projects. Plus, new previews of what's to come for Season 2.

Arcane: League Of Legends Netflix Series Gets A Trailer & A Date

November 6th couldn't arrive any quicker, Netflix has released the date and a trailer for the Arcane: League of Legends Animated Series.