Since first appearing on NXT 2.0 several weeks ago, Raw star Dolph Ziggler has made his objective clear: winning the NXT title.  The problem with that is NXT's resident veteran Tommaso Ciampa has made it his mission to keep outsiders out of the brand and certainly away from their titles.  So that brings us to tonight, where after weeks of antagonizing each other across both shows, Ciampa will face Ziggler one-on-one and the winner will be the number one contender to face Bron Breakker for the NXT Championship.

The NXT champ himself hits the ring to start the show.

The NXT Universe is on their feet for the champ! #WWENXT @bronbreakkerwwe pic.twitter.com/YlzjVJDga7

Breakker cuts a promo where he touts his success over Santos Escobar last week but then moves on to focus on Stand & Deliver at WrestleMania weekend, where he promises to walk in there as Champion and out as the same.

"I will walk out of NXT Stand & Deliver… STILL the #WWENXT Champion."@bronbreakkerwwe pic.twitter.com/LchSKD9yON

He's interrupted by Ziggler, who says Breakker won't make it to Stand & Deliver as Champion.  He promises to defeat Ciampa tonight and then take Breakker's title.

A fine match here which serves as a decent blowoff to what has been NXT 2.0's longest-running feud as of late. They go for a solid 15 minutes before Knight looks to put Waller away with the BFT, but Sanga holds onto Waller from the outside, which makes Knight smash his face on the mat.  Waller then hits an Inside Cradle while grabbing Knight's tights for the pinfall.

After, Knight attacks Waller and hits both him and Sanga with BFTs.

We now go to a video from earlier of Dakota Kai talking to Wendy Choo backstage and wanting to know why she entered them into the Dusty Cup Tournament?

We next go to another video package of Cora Jade and Raquel Gonzalez training for the tournament.

Next, we go to a lounge where Toxic Attraction is watching the tournament matches and they cut promos on some of the teams.

This match is pretty much a mess from start to finish.  Lash Legend is downright awful in the ring and screws up just about every sequence she's involved in here, which rubs off onto her opponents, who are two of the best women in all of WWE, and makes them look worse for it.  Lots of botches and misses throughout this one and nobody comes out of it looking good.  Yeesh.

We now go to a backstage interview with Dante Chen before he faces Duke Hudson next, where he says he's looking forward to getting vengeance against Hudson for trying to injure him.

And then we go to a really stupid comedy skit with Briggs & Jensen where they're trying to make a dating profile video and it's painful.  Just awful.  Please stop trying to do comedy with people who cannot act?

A decent fast-paced, impassioned match here.  Chen throws everything at Hudson throughout, but Hudson is too powerful and eventually hits him with a Razor's Edge for the pinfall.

NXT North American Champion Carmelo Hayes and Trick Williams hit the ring now and cut a promo where they celebrate Hayes' victory over Cameron Grimes last week and where Hayes says no one can touch him.  They're interrupted by Pete Dunne, who reminds Hayes that he's never beaten him.  He then challenges Hayes to a match on NXT 2.0 next week, which Hayes accepts.  Grimes then runs in from the crowd and attacks Hayes and Williams.

We come back from a commercial break to find this has been made into a match (personally, I hate when they do this on Raw and SmackDown, so of course, they're doing it on NXT 2.0 now).  The match itself is fine.  Williams looks better and better each time we see him in the ring, but there's a VERY ugly spot towards the end where Grimes does a flying crossbody from the top turnbuckle and doesn't wait for Williams to turn around fully, so he just clobbers him across the head on the way down.  This looked like Grimes' screwup from my point of view and like he was rushing.  Grimes then hits the Cave-In for the pinfall.

We now go to the locker room, where Ciampa is training for his match tonight and he's approached by Breakker.  Ciampa says they're one and one and Breakker says he's looking forward to their rubber match.

Next, we go a video of Andre Chase doing a lecture at Chase University and insulting Von Wagner.

Well, after weeks of befuddlingly stupid hype packages, it's the in-ring debut for Nikkita Lyons here and while it's not necessarily a bad one, it does feel half-baked and like this lady's not ready for primetime yet.  She has size and presence, but the package is confusing and her offense appears to just consist of punches and kicks for the most part, which is never a great sign.  Even with other martial arts-based wrestlers, grapples and throws were their primary offense.

I don't know why this brand is so deadset on rushing people to TV who are clearly not ready.  No one in wrestling history has just figured it out in the spotlight and become some kind of instant star without lots and lots of work over time.  Even Kurt Angle spent years training and learning if you know about his story.  I get the company equally being anxious to find new stars and wanting to get their money's worth, but you don't get a great restaurant by putting out food that's undercooked.

Lyons does get the win here in her debut with a Spinning Roundhouse Kick and then a pinning setup that, umm, would make Rikishi blush.  Wrestling Twitter loved that image last night.

We then go to the locker room, where Persia Pirotta and Duke Hudson make out until they're interrupted by Indi Hartwell.  This leads to a misunderstanding with Dexter Lumis and yeah, none of this makes too much sense.

Next, we get a video promo from Robert Stone and Von Wagner ahead of his match against Andre Chase next week.

Malcolm Bivens and The Creed Brothers head to the ring now, where Bivens talks down to Imperium and lists the ways the Creeds are better athletes than them.  Imperium head out to answer him and GUNTHER speaks down to Bivens (while the crowd loudly chants "WALTER").  They get in the ring and the Creeds brawl with the tag champs while GUNTHER goes for Bivens.  Solo Sikoa then appears and knocks out GUNTHER.

We next get a backstage interview with Joe Gacy where he discusses a run-in he had with Draco Anthony in the gym.  This gives off some vibes that I don't think creative intended for it to and I'll just leave it at that.

This match is worlds better than the earlier tournament match.  Both teams look strong here, but Catanzaro eventually puts it away with a top rope 450 Splash for the pinfall.

After the match, Ivy Nile chokes out her partner in the ring until Roderick Strong stops her.

We then go to a backstage interview with Solo Sikoa where we find out he'll face GUNTHER one-on-one.

We then get a backstage promo from LA Knight where he says he was the last man standing.  I guess we can see where this is going.

A fantastic main event here and man, oh man does a good veteran match stand out big time on a card filled with green talent.  These guys know how to properly adjust the speed of the match throughout and sell every move like a superstar.  It's also a very visibly snug match, as I'm sure each guy trusts the other and is willing to let them do what they have to tell the story.

There's lots of exciting back and forth action and near-falls towards the end, but as Ciampa is set to take it and tosses Ziggler in the ring, he's hit from behind by one of the cameramen and pushed inside where Ziggler Superkicks him for the pinfall.

After the match, the cameraman removes his mask to reveal it's Ziggler's partner Robert Roode.  The two then stomp on Ciampa, until Breakker runs in to clear them out of the ring.  He then challenges them to a tag match next week and they run back into the ring for a brawl with Breakker and Ciampa.  Refs and officials try to break it all up as NXT 2.0 this week ends in a donnybrook.

Not a bad show tonight.  There were some pretty good matches and they set up a good show for next week.  There was, of course, too much comedy and skits nonsense, which unfortunately has come to be expected every week now, but overall, the good outweighed the bad here. 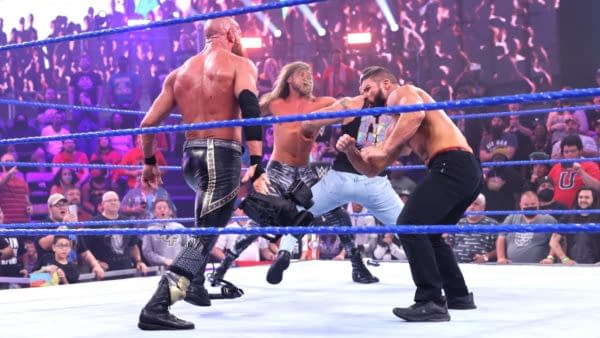 Review by Ryan Fassett
6/10
Not a bad show this week. We got some pretty good matches throughout and a really good main event match to end the show on a high note. It wasn't perfect and there was still some pretty noticeable bad stuff here, but the highs were brighter than the lows.