Hey gang!  We're almost three weeks away from WWE's next Pay Per View event, WWE Day 1 and we already have our main event set, with Roman Reigns defending the Universal title against Brock Lesnar.  But with all that time left between now and then, there's a lot that can happen that could impact the match itself and both men in it.  Lesnar has been in rare form after returning to SmackDown last week, showing off an intimidatingly fun side that we've rarely if ever seen in his 20 years in WWE.  Is it all to play mind games with Reigns and will it continue tonight?  Let's find out!

SmackDown tonight opens (as it should) with a quiet tribute to the great Jack "Blackjack" Lanza, who passed away this Wednesday at the age of 86.

The brief former number one contender, Sami Zayn now makes his way out to the ring in a wheelchair and surrounded by two medical aides to kick off SmackDown.

Zayn lays it on thick here, saying he's the toughest man in history for surviving attacks from Brock Lesnar and Roman Reigns in one night.  He then says it's a conspiracy and that Lesnar and Reigns were working together to keep him away from the Universal title.  He then says Lesnar's betrayal is what hurt most and now he must sue Adam Pearce, Sonya Deville, Reigns, Lesnar, etc.

This brings out Paul Heyman, who mocks Zayn for what he said and then looks into the hard cam to say something for Reigns (who's not here tonight), which pisses Zayn off and he gets out of his wheelchair to threaten Heyman, which brings out Lesnar and oh my god, he's wearing overalls!!!  Brock Lesnar, maybe the most legitimately scary guy in the history of WWE is wearing overalls to the ring!  Mattel, I demand an action figure of this immediately!

As "The Beast" makes his way to the ring, Zayn is now back in his wheelchair and holding his chest.  Lesnar grabs a steel chair from ringside and brings it into the ring.  He then sets it up to sit down across from Zayn.  He takes the mic from Heyman and sits down to ask Zayn "how you doin' buddy?"

Lesnar apologizes for last week, but Zayn isn't having it.  They have a genuinely entertaining back and forth here with each bouncing off of the other very well.  They even speak French to each other at one point.

Lesnar tries to prove to Zayn that they are indeed friends and he invites him to his home in Saskatchewan to go hunting and fishing, which Zayn turns down because he's a vegan.

Lesnar convinces Zayn they should get out of here and go have fun and starts pushing Zayn's chair, but Heyman takes the mic and demands to know what is going on?  He implies that Lesnar has gone soft, but then says he's the likely future Universal Champion and Lesnar then destroys the nurses before turning his attention to Zayn and kicking him out of the wheelchair and throwing the chair from the ring, before planting Zayn with an F-5.

We next see Lesnar walking backstage when he's confronted by Kayla Braxton, who asks him what was the point of him coming to ringside?  He says to ask his advocate, Paul Heyman.

"Why don't you ask my advocate Paul Heyman?" 😮

Nakamura's hand is in a cast here, so I guess he's working through and broken hand or fingers.

A super-fast squash here with Boogs wiping out both Lotharios, before tagging in Nakamura, who kicks Angel and pins him.  It was a nice showcase for Boogs, who I think is a big potential superstar, but a nothing match.

We now head backstage, where King Woods and Kofi Kingston reveal Woods' new crown to a group of other wrestlers, who are very impressed by this.

Next, we go to SmackDown Official Adam Pearce's office, where Drew McIntyre enters with his big sword and demands answers as to why he wasn't in the battle royal a couple of weeks ago?  Pearce says that decision came from a "higher authority" (oh god, here comes Vince in a cloak yelling "It's me, McIntyre!  It was me all along!") and that same authority says he cannot bring his sword to the ring tonight for his match.  McIntyre then stabs the sword through Pearce's desk and walks out, which I have to say, really made the desk look much cooler.  I'm going to stab a sword into my desk right now.  Excuse me…

We now head backstage, where Toni Storm is getting ready for her match against Charlotte Flair tonight.  Sasha Banks approaches her to give her support and cheer her on.

Here's a battle we can file under the ever-growing list of things The Simpsons predicted:

All jokes aside, this is actually a pretty fun, hard-hitting one from two of WWE's best veteran hands.  These guys just wail on each other here and have bright red chests by the end to prove it.  Every shot is hard and loud.  Eventually, McIntyre is able to hit a surprise Claymore out of nowhere for the pinfall.

We head back to Adam Pearce's office now, where SmackDown's two resident wastes of a paycheck, Happy Corbin and Madcap Moss are taking off with Pearce's desk and McIntyre's sword with it.  Oh yay, they're continuing to force McIntyre into a program with these useless assholes…

We now get a nice video package celebrating the life and career of the late, great Jack Lanza.

Next, we go backstage where Paul Heyman is interviewed about what happened earlier and he's asked if he is again the advocate for Brock Lesnar, which he doesn't answer.  He's then asked about how Roman Reigns will react to tonight, which upsets Heyman and he walks off.

Right before the match starts, Deville announces Natalya as the ring announcer and Shayna Baszler as the timekeeper.

Naomi jumps out of the ring and beats down both women, before returning to the ring to face Deville one on one, but Deville jumps out of the ring and then all three of them gang up on Naomi, which brings out the debuting Xia Li, who they are now calling "The Protector" and in her entrance, Xia Li shoots out lightning and fireworks from her hands while doing martial arts.  I'm not exaggerating at all.  WWE has gone full stupid WCW with this one and is now trying to make Mortal Kombat characters as WCW did with Glacier.

So, with her super-duper powers, Xia Li helps Naomi clean her enemies out of the ring.  Naomi and Xia Li then bow to each other.  Wow.  Just, wow.  Dumb shit overload here.

We now head backstage, where Riddle and Randy Orton are talking and Riddle brings over Johnny Knoxville and the cast of Jackass for some silliness.

If Storm wins, she gets a title shot against Flair for the SmackDown Women's title.

They have a really awkward-looking and sloppy match here, which never feels quite right.  For one thing, they're working at two different speeds here, with Flair going full and Storm working slow, so that doesn't work.  Plus, there are just some noticeable miscommunications and a really bad-looking German Suplex to Flair where she lands on the side of her shoulder.

Eventually, Flair gets Storm onto the ring steps and stomps her into oblivion, leading the ref to call for the bell and disqualify Flair.  Yay, a non-finish.  So I guess we can look forward to many more pies to the face, leading to an actual title match between the two soon.

After the match, Flair gets Storm back into the ring and hits her with a big boot.

We now go back to Adam Pearce's office, where Brock Lesnar confronts the SmackDown Official and thanks him for his suspension because it allowed him to go hunting, where he killed a giant moose.  Lesnar pulls out a flip phone (is anything with him from the past decade?) to show him a picture of the moose, but gets frustrated with the phone (probably because it hasn't been useful in 20 years) and breaks it.

He then describes killing, skinning, gutting, and butchering the moose.  He tells Pearce he named the moose after him and that every time he looks at its head on his wall, he wants to remember his suspension.  Again, really good stuff from Lesnar here.  Very intimidating and well done.  Why have they so rarely let him speak for himself over the past couple of decades?

The New Day vs The Usos vs RK-Bro

The match is fine.  Everyone here knows what they're doing and they do everything right.  It's just that we've seen them all face each other so many times now, there's really no excitement left for it.  That's not a knock on them as talents; it's a knock on creative for not finding other teams to mix in here and make the tag divisions interesting.

Kingston and Woods get the win at the end, which I guess means they favored popping the crowd over protecting both champion teams.  Especially as they were billing this as a match to determine "the best tag team in WWE".

And that does it for another episode of SmackDown that felt like they had about 20 minutes of interesting TV written out and then filled the rest of the time with pointless crap that ranged from blasé to downright stupid.  You did two hours on network television and the only thing people will be talking about is Brock Lesnar wearing overalls.  Brilliant WWE… brilliant. 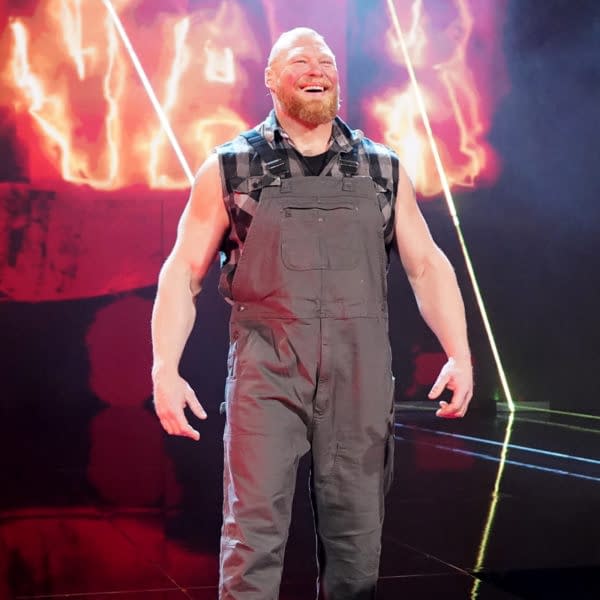 Review by Ryan Fassett
2/10
Another SmackDown episode that felt like a giant waste of time. By bringing in the Raw Tag Team Champions to headline the show, you're basically telling your audience "Hey, we don't think the guys here can entertain you, so we need reinforcements!" The Brock Lesnar segments were good and I'm liking his character as of late. The Drew McIntyre/Sheamus match was pretty good. But everything else was lazy and/or dumb.

Ryan Gosling's directorial debut Lost River cast former Doctor Matt Smith in the role of the villain after Ryan Gosling saw him in Doctor Who. "Doctor Who