Hey gang!  So SmackDown last week was a lazy offering with only two things for us to take away: that Brock Lesnar's suspension was lifted and he's returning this week and that Sami Zayn is now the number one contender for Roman Reigns' Universal title.  And that brings us to now, where those are the only things we can really assume will be addressed, but hey, maybe they came up with some stuff for everyone else to do also.  Let's find out!

The returning Brock Lesnar kicks things off by heading to the ring to address his situation.

Just as he starts to speak, Lesnar is interrupted by Sami Zayn, who is excited to be crossing paths with Lesnar.  Lesnar doesn't seem to know who Zayn is and proceeds to intimidate the hell out of him.  Zayn informs him that he's the number one contender for the Universal title, which Lesnar finds hilarious.  Zayn then says after he defeats Roman Reigns for the title at Day 1, he'll give Lesnar a title shot.  Lesnar then says they're playing him by making him wait and he should challenge Reigns tonight.

Lesnar intimidatingly talks Zayn into it, with a little help by twisting his hand.  Zayn agrees and an excited Lesnar tells him he'll have his back.  This was surprisingly a fun segment and these two worked well together.  Who knew Lesnar could be so funny and charismatic?

We now go backstage, where Zayn is talking to Sonya Deville and trying to get out of it, but Lesnar shows up and Deville agrees that Zayn should face Reigns tonight and Lesnar will face the winner at Day 1.

A pretty good back and forth one, which isn't surprising with these two, who are more than capable of putting on good singles matches.  Baszler tries a Gutwrench Powerbomb, but Banks turns it into a roll-up for the pinfall.

We head backstage where Sonya Deville is Facetiming with Adam Pearce and giving him updates on the whole Lesnar/Zayn/Reigns situation.  Pearce is unhappy about everything and says he will be staying away tonight.  He says he will "remember the Alamo tonight", which doesn't make much sense.  Like yes, they're in San Antonio, but how does that phrase apply to this situation exactly?

Drew McIntyre approaches Deville and wants answers as to why he wasn't in the Battle Royal last week?  Deville pins it all on Pearce and McIntyre says he wants a word with him.

And now it's time for the worst act in wrestling today, as the jackass duo of Happy Corbin and Madcap Moss head to the ring and the audience heads to the bathrooms/concessions line.

It's worth noting at this point that the fake, piped-in crowd noise is very noticeable tonight and has been since WWE was embarrassed by the crowd they murdered in Brooklyn at Survivor Series a couple of weeks ago.

So, the two douches are doing Happy Talk and they trash-talk Jeff Hardy and Drew McIntyre, who of course both come out and beat up the idiots.

We get another comic book video package for Xia Li now, but this time we learn she will make her SmackDown debut on next week's show.

The Viking Raiders vs Los Lotharios

A super short one here. Lotharios have it set up for their finisher, but delay for an awkward amount of time, which we then see is to give Shinsuke Nakamura and Rick Boogs enough time to get through the crowd and up on the announce table to "distract them", which then doesn't even work cause they roll up one of the Vikings immediately for the win?  What the hell was going on here?  None of this worked or made any sense whatsoever.

After the match, the Vikings have words with Nakamura and Boogs, but then they all just end up rocking out to Boogs playing guitar.  This was painfully stupid.

We now go to a backstage interview with Toni Storm, whom they've effectively removed any and all of the character stuff that made her unique and interesting down in NXT and now have her as a generic and boring blonde woman on the SmackDown roster.  And she does a very bland and boring promo here with all of the vanilla rah-rah bullshit that forgettable wrestlers have done since the beginning of time.  Bummer.

Jey Uso is of course accompanied by his brother and co-holder of the SmackDown Tag Team Championship, Jimmy, but King Woods isn't alone, as he brings out the returning Kofi Kingston to have his back in this one.

These guys of course have a pretty solid, albeit short, battle here and that's no surprise as you'd be hard-pressed to find two teams and their members who know each other as well as The New Day and The Usos do.

It all ends when Woods goes to the top rope, but Jimmy pulls him off from the outside, leading the ref to call for the bell.

After the bell, Kofi hits a big leaping clothesline off of the ring steps to Jimmy and a brawl between the two teams breaks out in the ring.  Woods and Kofi chase off the Usos and stand tall in the ring.

We go to Roman Reigns' locker room, where he and Paul Heyman are watching this on TV.  Reigns becomes enraged by his cousins' failure and goes over all of the bad things happening tonight.  He questions Heyman and how much he knew about Brock Lesnar's return.

Woods and Kingston are celebrating backstage with Aliyah and they call over Kayla Braxton to tell her that they are out for revenge against the Usos and will challenge them for the SmackDown Tag Team Championship at Day 1.

The SmackDown Women's Champion Charlotte Flair hits the ring now and addresses Toni Storm and her continuing challenges to her.  She talks down to Storm and belittles her, mocking her for smashing pies in her face last week.  She says she's considered her challenge and the answer is still no.

As Flair exits, Storm appears and hits her in the face with a pie.  Yep, that's how we'll get everyone to take Women's wrestling seriously.  Feuds built around pies to the face.  Come on!

A really fun fast-paced, hard-hitting one here from two guys that know each other very well and clearly have trust with one another to go really stiff and snug.  You hear all of the hits in this one and there's a real intensity to it.  Ultimately though, Sheamus hits the Brogue Kick for the pinfall and the win.

Naomi confronts Sonya Deville backstage, calling her "Cruella Deville", cause you know, WWE writers have the creative minds of a 7-year-old.  She challenges her to a match, which Deville accepts, but only when she wants and only if Naomi doesn't touch her before.  Deville then smacks her hard, even though Naomi can't fight back.

Before the match, Zayn cuts a promo guaranteeing he will win and be the new Universal Champion tonight.  He says the only person he has to thank for it is Brock Lesnar, which brings out "The Beast" to take his place at ringside for the match.

Zayn then kisses Lesnar's ass and tells him he'd probably have an easier time facing him than Roman Reigns and he brings up how he hasn't beaten Reigns in a long time.  Lesnar then grabs Zayn and beats the hell out of him with a bunch of German Suplexes and an F-5.  And then another.

Lesnar then hangs Zayn up in the corner, which brings out Roman Reigns, who after his very long entrance, hits Zayn with a Spear and then locks him in the Guillotine, which Zayn taps out to immediately.

So now we know it will be Roman Reigns versus Brock Lesnar for the Universal title at Day 1.

Reigns and his cousins pose in the ring with their titles as SmackDown ends for the night.

Ok, so, the main story between Lesnar and Reigns with Zayn throughout was entertaining and the Cesaro/Sheamus match was good, but there, of course, was too much stupid crap throughout and it was overall a boring and energyless show.

Hopefully, it'll pick up closer to the Pay Per View event. 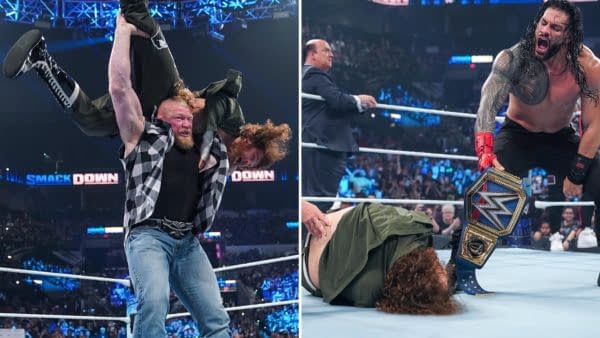 Review by Ryan Fassett
3.5/10
Not as bad as last week's show, but nothing great here either. The Lesnar/Zayn/Reigns stuff was entertaining, but aside from that, the show felt as though it was without direction and had very little energy throughout. The highlight was the match between Cesaro and Sheamus, who went out and beat the hell out of each other to pick the show up a bit.

WWE Hall of Famer Barry Windham suffered a heart attack over the weekend and is now in an Atlanta ICU fighting for his recovery.

Have we seen the last of William Regal in AEW, and is he heading back to WWE to work again with Triple H in the very near future?

Comedy Central's The Daily Show host Trevor Noah took time to thank both the fans and Black women who've supported him throughout his life.

DC's Stargirl series & character creator Geoff Johns discussed the series ending with "Never The End" and what viewers can take from that.

AEW is headed to Los Angeles in the new year, and last night on Dynamite, Britt Baker challenged Saraya to a match at the show.