We're full speed ahead on the road to WrestleMania and that takes the form of a contract signing on this week's episode of SmackDown on Fox.  This week's contract signing (remember the super awesome one last week?…) will feature WWE Champion and Royal Rumble winner Brock Lesnar and Universal Champion Roman Reigns signing the dotted line to make their main event match at WrestleMania official, which will see each man putting his title on the line in a "winner takes all" match.  Let's see if they found a new and interesting way to flip the table over here and take a look at this week's SmackDown.

We kick things off with Ronda Rousey hitting the ring and she's still awkwardly giving high fives and doing the whole forced at gunpoint smile.

.@RondaRousey is LIVE on #SmackDown! pic.twitter.com/T8T1lcdMYp

Michael Cole interviews her in the ring and good god, she cannot speak at all.  She has all the charisma and energy of room temperature milk and man, is this a dull way to open the show.  So anyway, Rousey slowly chokes out some monotone words until SmackDown Women's Champion Charlotte Flair heads out to try and inject some actual life into this awful segment.

"For the first time in your life, you are going to scream for mercy and TAP OUT."#SmackDown #WrestleMania @MsCharlotteWWE @RondaRousey pic.twitter.com/DDE0WbPzMC

Flair trash talks Rousey a bit, as Sonya Deville runs in from behind and chop blocks Rousey.  Flair then bashes Rousey's knee around the ring post and yeah, this is just dead.  The crowd is dead silent during the action, which is pretty indicative of how little anyone cares about this.

We now head backstage where Adam Pearce lectures Deville about her actions and informs her that next week, she'll face Rousey one-on-one.

Los Lotharios vs The New Day

So we're doing this match for now the third week in a row.  Three times!  In a row!  Can you get lazier booking than that?  I get wanting to build a rivalry between these teams and that's fine and good, but you don't get there by doing the same goddamn match over and over.  Doing that just makes people sick of it pretty quickly.  Why don't they mix it up?  Have them face each other in singles matches and then swap opponents the next week.  Have New Day face a different team and Los Lotharios interfere to cost them the match, thus giving it some heat.

And let me be clear, my complaints have nothing to do with these four men.  I think they're all great in fact and they've done everything they can to make these matches exciting.  It's that wrestling feuds aren't rocket science.  In fact, they're pretty simple.  We all know by now what works and what doesn't and what goes into making something work.  It's like your basic Mexican food.  Everything is made out of the same few ingredients, but you package them and prepare them differently so that the person eating them doesn't get bored with them.

Now the match here is, of course, good and entertaining.  Because these four guys are excellent and can take the lazy, repetitive booking and still put on a hell of a show.  The energy is great throughout and there are some exciting near-falls as it goes on.  Eventually, New Day hits the Midnight Hour to get the pinfall.  See you next week for the same match!

We next head backstage, where Sheamus and Ridge Holland try talking trash to the New Day.

And then we go to a backstage interview with the SmackDown Tag Team Champions The Usos, but it's interrupted when the Viking Raiders run in to jump the Usos.

So now we go to a backstage interview with Xia Li ahead of what they're calling her "WWE in-ring debut", which makes no goddamn sense, as not only was she in NXT, but she's been on SmackDown since like December?  Whatever…

This match is fine.  Li looks strong here in her "debut", so I guess we can pencil her in to be released sometime in the next month.

Sami Zayn heads out now to celebrate his Intercontinental title win last week.  He's rocking a gold tux and has the ring decorated as he pats himself on the back.

Jackass star Johnny Knoxville heads out to the ring to interrupt the party, where he challenges Zayn to a title match at WrestleMania.  Zayn ends up beating up Knoxville and blasting him with two Helluva Kicks.

After, Zayn is making his case to SmackDown official Adam Pearce backstage, when Ricochet interrupts, wanting a shot at his title.  Zayn argues, but Pearce agrees and sets the match for next week.

As the match is about to start, Naomi comes out and goes to commentary for… reasons?  The match itself is very quick and Banks has Shotzi tap to the Banks Statement.

After the match, Naomi enters the ring and says they're going to be the next Women's Tag Team Champions.  Okay.

We now go to a backstage interview with Happy Corbin and Madcap Moss, where they show and make light of Moss almost becoming paralyzed at Elimination Chamber and then set up Corbin facing Drew McIntyre tonight.  Wait, it was advertised earlier that Moss was facing McIntyre in a rematch tonight?  Oh, I guess they're just not keeping track of anything on SmackDown now huh?

As the match is about to start, Corbin grabs a mic and makes it so Moss will face McIntyre tonight instead of him.  Did, did the SmackDown writers even confuse themselves here?  I mean come on!

So they jump McIntyre and double team him before Corbin exits and they ring the bell.  McIntyre quickly rallies though, and they have an okay match.  Eventually, McIntyre blasts him with a Claymore for the pinfall.

We now go to a backstage interview with Ronda Rousey, cause we just haven't had quite enough of her horrible promos tonight.  She again Frankensteins her way through making a threat against Sonya Deville and hopefully, that's the last we see of her this episode.

And now it's contract signing time, as Roman Reigns and his entourage head to the ring.

So now they're calling this "the biggest WrestleMania match of all time".  Bigger than Hulk Hogan versus Andre The Giant.  Bigger than Bret Hart versus Shawn Michaels.  Bigger than "Stone Cold" Steve Austin versus The Rock.  This is it, huh?  A match we've seen numerous times before, even at WrestleMania.  Hmm.  Not setting anyone up for disappointment there, are we?

Paul Heyman hypes the match now, where he confirms they think this match is bigger than those matches I named above, as he cites several of them and says this is indeed bigger.  He introduces a number of security guards, that he says are here to keep Lesnar under control.  I guess they give Heyman a signal here because he makes a joke about this being a cliffhanger and they just cut to commercial.  Yeesh.  So they come back from an oddly timed break and Brock Lesnar enters now.

Lesnar grabs the mic and calls Heyman a dick, which is kinda funny, and then does his own version of Heyman's announcement for him.  Lesnar threatens Heyman and Reigns and then promises to kick all of their asses at WrestleMania and guarantees he'll get paid for it.  No doubt about that…

Lesnar signs the contract and Heyman then warns him he won't make it to WrestleMania as WWE Champion because he's going to lose the title next Saturday at the Madison Square Garden show.  Reigns then signs the contract and cuts a passionate promo about owning WWE and everything and everyone in it, before sending the security guards after Lesnar.  This of course doesn't work and Lesnar demolishes all of the poor guys in the ring as SmackDown ends.

Well, that episode was a chore.  We're about five weeks away from WrestleMania and it feels very awkward right now.  Why did they do a contract signing so far in advance?  This whole segment could have been done on the last SmackDown before the event, yet they did it over a month before?

That, combined with the lazy booking and the genuinely awful Rousey stuff, man, this is not looking too good going into their biggest show of the year.  Let's hope the Austin rumors are true, cause boy do they need a shot in the arm. 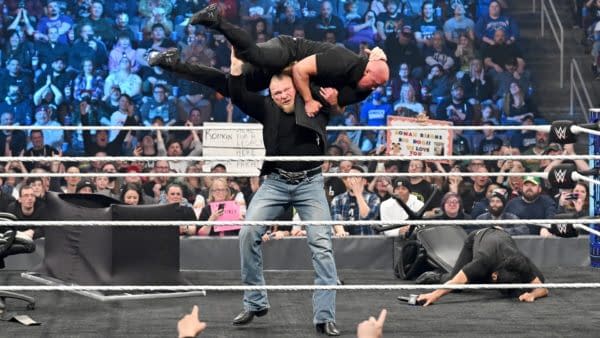 Review by Ryan Fassett
2/10
Matches we've seen many times before, questionable timing of certain segments, and Ronda Rousey just being a black hole of entertainment made this episode of SmackDown a chore to get through. The road to WrestleMania is currently veering in the wrong direction.

Not even a thumbtack-bedazzled hoodie could save Darby Allin from losing the TNT Champion to Samoa Joe on AEW Dynamite. Oh, and Wardlow's back.

House of the Dragon Season 2 Filming in London, Spain This March?

Based on a recent production listing, HBO's House of the Dragon looks to be filming the second season this March in London and Spain.

The Walking Dead: Is Daryl Dixon Spinoff Looking to "Raise the Dead"?

A recent Instagram Stories post from Norman Reedus couldn't help but "Raise" some questions about The Walking Dead/Daryl Dixon spinoff.