The last few episodes of Star Trek: Lower Decks traveled down the path of seriousness I was hoping for since the series started. I get that the Paramount+ series is a comedy, but many of the Season 2 episodes felt like some canonical bucket list of inside jokes for fan-servicing sake. The season finale "First First Contact" laid out another path of crossroads for the U.S.S. Cerritos. In this case, the ship's captain Carol Freeman (Dawnn Lewis) must mull over an important career decision while the crew has a mission to help the Excelsior-class U.S.S. Archimedes.

The first contact with a planet serves as the backdrop of the main story, shifting to a story of survival. Lighter on the comedic elements, it provided the element of teamwork where the Cerritos comes together in a problem-solving manner, honoring the classic "Star Trek" style. Every member of the crew, from the senior staff down to the lower decks, contributes more than their share storyline-wise. As far as performances go, Lewis' Freeman and Tawny Newsome's Beckett Mariner provide their strongest of the series so far. While we're used to the incessant bickering, we finally feel the deep emotional bond between mother and daughter in their scenes that's not solely based on over-the-top dysfunctional family clichés.

Others who shine in their own right are Jack Quaid's Brad Boimler, who physically challenges himself in a climactic moment. Noël Wells' D'Vana Tendi goes through her own Starfleet existential crisis with her uncertain future on the Cerritos and Eugene Cordero's Samanthan Rutherford's ongoing issues with his cybernetic implants & how its defect might affect his memories of Tendi. "First First Contact" shows that Lower Decks doesn't have to be boxed in as a parody of Star Trek to have quality stories. Its potential is starting to pay off because it realizes it can be more when it wants to be. 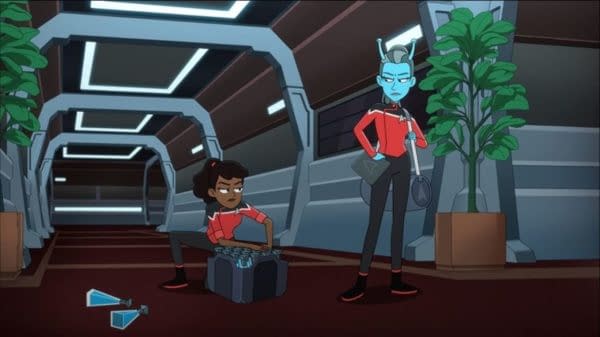 Review by Tom Chang
8/10
Creator Mike McMahan took it upon himself to deliver one of the strongest outings from Star Trek: Lower Decks so far. Every core cast member gets a chance to shine, with the primary focus of the episode on the bond between a mother and daughter. Definitely, a "classic" way to end the season.
Credits
Director
Jason Zurek

[SPOILER] tweeted an emoji-only response to the love & appreciation received in the She-Hulk: Attorney at Law S01E01 end-credits scene.

Buffy the Vampire Slayer star Nicholas Brendon is recovering from a cardiac incident that required him to be rushed to the emergency room.

The Lord of the Rings: TROP Intros Viewers to Elrond, The Southlands

In the latest teasers for Amazon's The Lord of the Rings: The Rings of Power, viewers get to know Robert Aramayo's Elrond and The Southlands.