Finally, we're back so let's dive into more of FOX's The Great North and its second season as it continued rolling along with the latest episode, "Beef Mommas House Adventure", focused on Beef and Moon Tobin.

We started by seeing Moon attempt to find a place with friends as they hang out while their moms are busy together in a moms group. But what caught me right away was the hilarious and incredible puns coming forth from Wolf's mouth as he found a random oven mitt in weird places all over the Tobin household. Whoever wrote the lines he says, like "Hamburger help me!" and "Honey Bunches of Scrotes!", deserves all the praise because it's a pure absurd joy to hear them. Beef Tobin attempts to find a place for himself in his time with the mom group that Moon sort of pushed him into at the last minute.

In this episode of The Great North, I truly was moved by Moon, who wanted to be included but also felt the drive to be honest with what he thought about the sled his friends had built because he just wanted to make things better for everyone. I'm getting hints of neurodiversity in Moon because I can oddly relate and it tugs at my heart, to be honest. Beef is so sweet but also so logistical, it's a unique and great combination for his character alongside his time with the other moms and potential friendships with them. When honesty versus complacency arises for Beef when he sees a boyfriend of one of the moms kissing another woman he debates telling them.

While Moon rides the line between blunt honesty and the desire to let go with friends, it becomes obvious that parts of him are needed in the friendships he builds. It was great seeing him help but let go of controlling the situation. Meanwhile, Beef and the moms help control the scandal of the boyfriend kissing another woman by making his snowmobile into a large icicle and then grabbing ice cream afterward. I'm very happy that things didn't go down a path where Beef would have made a mistake, apologized, but ended up leaving the moms group. Beef's character deserves that community environment that often is denied from existing for single dads or single parents in general. The undertone of a haunted oven mitt and eventual attempt at a séance throughout this episode of The Great North was simply icing on the cake. A simple background story that didn't overpower the main plot. Let me know what you thought in the comments below!

We're back!! TONIGHT watch a new episode of #TheGreatNorth! Written by the hilarious @kashanacauley. Beef joins a moms group that includes the homie @jennyyangtv making her cartoon debut. Watch tonight at 8:30pm on FOX or Hulu the next day! pic.twitter.com/dquA4YA0ae 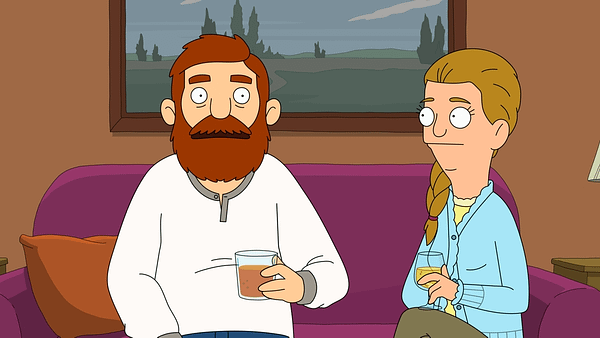 Review by Brittney Bender
9/10
Haunted oven mitts, mom groups, and sledding all have a place at the table in the most recent Season 2 episode of FOX's The Great North.