FOX's The Great North went to pottery class and addressed growing old in the episode, "As Goldie As It Gets Adventure." Some minor spoilers may be ahead, so consider this your fair warning before reading any further…

Ham is a fantastic character on The Great North, you truly get to see a level of compassion and personality towards helping others in this episode. From the start, this episode showed a lot of strength. As someone who studied female artist history and is an artist myself outside of writing, Honeybee's question, "You know there are women artists, right?" to the Tobin men was hilarious and accurate of how often we forget that part of art history.

Although having some missteps when it came to art, the Tobin family is so sweet toward Judy about her pottery class creations. I wish that section of the episode had a little more to it or was changed a little, but what did help was her saving her creations during the old folks' party.

Goldie, voiced by Holland Taylor, was an excellent guest star character on The Great North. With an immediately calming and reassuring voice, she fit the character so well. The Ocean's Eleven-style break from the nursing home by Ham and Goldie was fantastic. Each story in this episode added its worth and I couldn't help but feel truly moved by Goldie having to let go of her old home and deal with the grief in that. Goldie was full of perfect quotes such as "never put off for two days the party you can have today."

I was expectedly crying over Ham and Crispin having a moment on the top of the bus, which was parked by the pond Goldie stopped at with Ham earlier. The Great North worked a lot of magic and I ended up almost loving every bit, I can't help but love a message similar to "stop and smell the roses" mixed in with some romantic undertones. 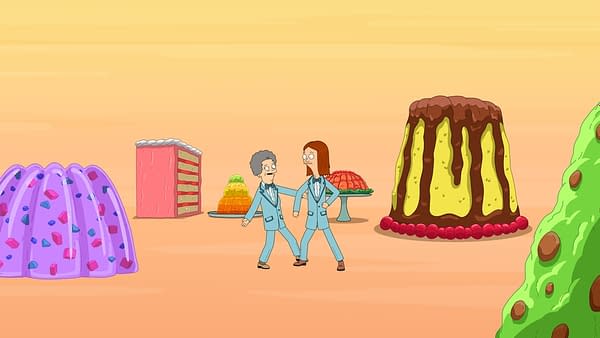 Review by Brittney Bender
10/10
FOX's The Great North S02E16 "As Goldie as It Gets Adventure" reminded us that animation has the capability to move hearts and conversations about aging and what we bring into relationships. This episode was a fantastic example of how heart and comedy can blend well when done with care as well as reflection.
Credits
Network
FOX

What We Do in the Shadows Season 4 Trailer Doesn't Skip a "BAT!"

FX's official trailer of What We Do in the Shadows Season 4 brings another round of darkly hysterical humor without skipping a single "BAT!".

Though filmed well before this week's Supreme Court decision on abortion, Motherland: Fort Salem speaks to the war on women now underway.