Lance Hornsby (Josh Hamilton)? You're "a liar, your breath stinks, you don't love Jesus, and someone needs to call your momma." I'm putting that in quotes because that was a line taught to me by a friend years ago so I'm not claiming credit, but it absolutely applies in this case. But let's not get ahead of ourselves, shall we? By the time the credits rolled on Lily Mariye-directed & Kevin Deiboldt-written penultimate episode of AMC's The Walking Dead Season 11 Part 2, the case had been made that the most precious item to have in the TWDU isn't a weapon or food or shelter… it's trust. So it was only fitting that the episode would be titled that because we see time and again why being able to trust another person could literally be the difference between life and death. And how mistrust and fear can bring societies crumbling to the ground. So with that in mind, I'm throwing on the "MAJOR SPOILERS AHEAD!" sign and dropping an image spoiler buffer before we start a deep dive into what "Trust" had to offer.

Gotcha! C'mon, did you really think Daryl (Norman Reedus), Aaron (Ross Marquand), and Gabriel (Seth Gilliam) were going to side with Hornsby & the Commonwealth over Maggie (Lauren Cohan) and Hilltop? Mariye and Deiboldt did an impressive job of taking a moment we thought we knew going into the first midseason break and twisting our focus on it completely based on what we had learned leading up to it. But best of all? They met the major requirement that comes from being the penultimate episode, and that's effectively setting up the big (& final) midseason finale next week (or now if you have AMC+).

And the reason why "Trust" worked so well is that it did that thing the show's done so well so many times in the past. Along with drawing the lines of the impending war between Hornsby & the Commonwealth and Maggie & our heroes, it also presented us with personal moments that vibed like soldiers making peace the night before going into battle. And with how things are looking on the outside, it might just be Rosita (Christian Serratos), Connie (Lauren Ridloff), Kelly (Angel Theory), Eugene (Josh McDermitt), Ezekiel (Khary Payton), Carol (Melissa McBride), Mercer (Michael James Shaw), Princess (Paola Lázaro), Tomi (Ian Anthony Dale), and Max (Margot Bingham) who need to be the ones to step up and bring the fight to the Commonwealth. But for that to happen, we're seeing folks like our heroes having to trust in ways they haven't been used to. And for folks like Mercer and Max, it's about trusting people they barely know even though it may lead to the downfall of the only society that's brought them the first sense of normalcy in a long time.

Why We're Loving Hating Hornsby: So why all of the love-hate for Hornsby? Because Hamilton is presenting us with the kind of big bad our heroes have never faced before. I could argue that everyone they've faced off against up to and including the Reapers have all been "alt-reality" cautionary tales of the dark paths our heroes could've traveled down. But with Hornsby and the Commonwealth, you have our heroes facing their worst nightmare. That the new society they were fighting to forge has already been taken out of their hands and… well… it's "new boss, same as the old boss." In Hornsby, you have a deadly mix of a man who was clearly a "fixer" in his past with what appears to be a high level of walker apocalypse-induced madness. But he does it with a smile, a handshake, and the promise of a better tomorrow that makes it all feel almost oddly okay. So when I say in the headline that the show saved its "worst" for last, that's high praise because right now? Hornsby's claiming the crown for top big bad right now. It says something when you're rooting for Negan (Jeffrey Dean Morgan) to beat the crap out of Hornsby for threatening Hershel (Kien Michael Spiller) when Negan's the one who killed Hershel's dad. But that's how mustache-twirling Hornsby is.

Random Questions: Is the goal of the final season of The Walking Dead to present us with a ton of great couples only to have our hearts broken one way or another by the time the series ends? How pissed are you that Shaw hasn't been a part of the TWD family since Season 5? How great was that scene between Mercer and Princess when he trusted her enough to open up to her about killing two of his soldiers? How heartbreaking was it to watch Carol try to protect Ezekiel from getting involved because she knows he will once he knows? How nice was it to learn that Mercer's first name is "Michael"? How great are those "Daryl nods" to the others? How satisfying was it to see Hornsby's face when the truck wouldn't turn over? How nervous are you about Tomi's long-term future? How much did you want to punch your screen when Hornsby threatened Hershel? And cheered when Ezekiel (Okea Eme-Akwari) showed up? How not surprised were you by Ezekiel doing something great like setting up a clinic? How much do you wish that Daryl could've dropped more F-Bombs over the seasons? How much do Eugene and Max represent every dream geek couple out there?

Some questions to consider (and possibly respond to in the Comments section below) before next week brings the final midseason finale of AMC's The Walking Dead, "Acts of God" (directed by Catriona McKenzie and written by Nicole Mirante-Matthews). 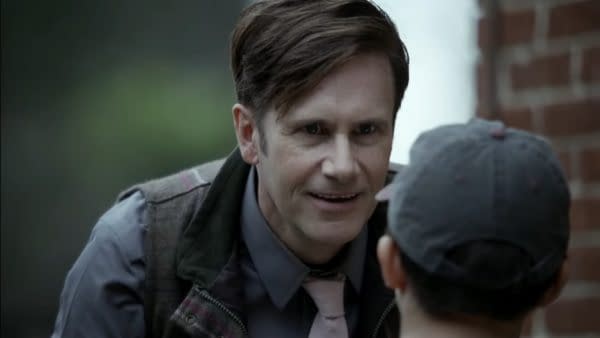 Review by Ray Flook
9/10
Lance Hornsby (Josh Hamilton) is not a very nice person. But let's not get ahead of ourselves, shall we? By the time the credits rolled on Lily Mariye-directed & Kevin Deiboldt-written penultimate episode of AMC's The Walking Dead Season 11 Part 2, the case had been made that the most precious item to have in the TWDU isn't a weapon or food or shelter... it's trust. So it was only fitting that the episode would be titled that because we see time and again why being able to trust another person could literally be the difference between life and death. And how mistrust and fear can bring societies crumbling to the ground.

AMC has released the series premiere of anthology spinoff Tales of the Walking Dead (S01E01 "Evie / Joe") for free on YouTube.