Showtime's Yellowjackets premiered the finale of season one, bringing answers and more questions all at once in a perfectly insane combination. Plenty of noteworthy moments happened in the finale, so major spoilers will be plentiful…you've been warned, buzz buzz.

The chaotic "Doomcoming" ensured a rough morning-after for the group. Coming to terms with the insanity that was most of them on shrooms is only part of what they have to face. The score playing as they woke up was fantastic and had an almost stomach-churning affect. Present day, another mess continued to plague Shauna, Misty, Natalie, and Taissa. Christina Ricci continues to be the best in each scene she's in, especially perfecting a macabre yet dry sense of humor in the situation with the disposal of Adam's body. Of course Shauna had the task of dismembering the body, part of her wishes she never accepted slicing the deer throats before everything else went down. But then again, hearing Misty's plan for her ex-lover's head and hands is a whole other concern to have outside of being the one stuck with cutting up someone.

In an awkward conversation Jeff had at the reunion, we get to see Allie Stevens (the girl who almost went on the plane but her leg bone tried to leave her body at practice) all grown up and acting in a way that makes you think she's carrying some form of jealousy for Shauna's life. While everyone waits at the reunion, the girls deal with the fucked up shit they just had to do in their own ways. Misty disposes of Adam's hands and head in with a poor old dead woman's body as it's being cremated. A smart yet hilariously dark choice I would expect for her to make. Taissa goes to her empty home to shed some tears for the lack of family present in it and the stress of political campaigns. Natalie spends some solemn moments, especially after that rough Travis-centered conversation she had with Shauna, at the motel getting ready. And Shauna also sobs at home, but for her it's in the shower and honestly that's not a bad place to do it (speaking from experience), followed by dressing up in a gorgeous gown Jeff bought her. Seeing these women of Yellowjackets walk through the doors of that high school gym, covered by a shroud of former classmates judgements and "sorry for them" expressions, was fantastic. There's something about these women together in scenes that draws attention so close to every word and action in this show.  Music choice was of course a fantastic with "Come Out and Play" by The Offspring accompanying it all.

Yellowjackets drops hints of the importance of mystery and supernatural elements in the forest. A few specific things stuck out to me when watching this finale. Lottie continues to get more and more in touch with these wooded surroundings and things in it, like the grizzly bear who somehow bent to her will as it seemed to turn its neck towards her as it lowered itself to the ground. The unnatural actions of this bear is nothing to throw away. Same can be said of what Van describes to Taissa regarding her brush with death after that wolf attack. I felt bad for Van, Taissa maybe didn't realize it but she was ultimately beginning to gaslight her partner, trying to help her excuse her experiences. Like teen Taissa, a lot of people tend to want to throw out or pass over these important moments because they'd wish it wouldn't go the supernatural route. But that's what has become so great about Yellowjackets, you can't deny what you're witnessing, but you also can't say with certainty that something otherworldly is going on. If the series didn't have these moments or supernatural indications, it honestly would suck and be using the potential given to it.

I feel like if I were in that group, I would also be trusting Lottie a lot more with her intuition and visions. Jackie of course had to recline and in her seat and have her eyes roll anytime someone didn't hint at complaining about their situation. I'm reminded of very old practices and pagan rituals or prayers placing importance on thanking or expressing thanks to surrounding nature or deities for food, comfort, and more. It's a really interesting direction to see Yellowjackets go towards in this first season and especially in the finale.

The reunion was a mix of badass moments and emotional gut punches. It sucked to witness Natalie's conversation with Kevin as she looked over the school's memorial shrine to the team, but the moment Shauna threatened Randy I began to start clapping because it was witnessing her grab that power and take it back. Allie's speech, including her telling a man named Doug to "shut the fuck up" was probably the funniest moment of the episode. Yellowjackets does so well when the switch between present and past moments with music joining them, even if it's Enya's "Only Time". The tact the school has for the women and their trauma may not be as present, but oh lord are they riding that tragedy for all it's worth. When the song ends and Jackie ends up pissing off everybody basically, seeing Shauna let out all the information on their toxic friendship was incredible and a huge moment. I felt like I was there and almost cheered her on for a moment there. Honestly, Shauna was incredibly on the nose describing the obsession Jackie has with herself.

Jackie, pissed at the group, throws a tantrum and leaves the cabin to fend for herself…a few feet away from the porch. While not realizing it, everyone sleeps through an increasingly chilly night that produces a lot of snow and one human icicle. Jackie is discovered in the morning by Shauna. I'm not one to love or have cared for Jackie's character, but wow the emotion in that scene of pure grief was very profound. What was terrifying was Jackie's (at least I'm pretty sure it was) dream that carried her as she faded into the afterlife. As she sees many around her in the cabin, she sees a strange face of a man in the background and based on his welcome message it seems he may be the spirit of the skeleton they found in the attic. While the past gave us a lot intense moments, the present day went batshit insane, starting with a fun missing person bulletin for Adam on the news mixed with Misty letting go her hostage with some fun poisoned cigarettes.

Yellowjackets has produced a series that continues to haunt, surprise, and surpass expectations. It did all three in this season finale. We got the shock of a lifetime, twice, with the discovery of a dog head/heart shrine (complete with the creepy symbol of course) in Taissa's secret room in the basement and with Natalie being kidnapped from her motel room by the cast of any religious cult movie in a weird way that saved her from killing herself. The one dude had a fun little necklace with the symbol on it and the women looked like they could and would punch a bird and then sing hymns after cleaning the blood and feathers off their knuckles. With Taissa's weird-as-fuck altar situation, it could be something she's doing in her sleep but it could also be an easy method for this group (that took Natalie) to use something they planted in their against her. They do laundry down there, that breeze definitely either signaled that this is a new secret spot or someone wanted it to be found.

if I was on #Yellowjackets pic.twitter.com/qQNxxs4cRO

Suzie, who told Natalie about Travis' bank account, can be seen leaving a voice message for her as she's kidnapped. And the words she said both took me by complete surprise and didn't all at the same time. Lottie Matthews was the one who accessed Travis' bank account, who probably coordinated the kidnapping, and who apparently decided she'd be the "Antler Queen" as long as she wanted to. The title of the episode, "Sic Transit Gloria Mundi" is Latin and roughly translates to ""Thus passes the glory of the world." Her offering of the bear's heart to the woods, along with Van and Misty by her side, shook me to my core. I couldn't tell exactly what she said at the end there, with the first part sounding like French and the second part either sounded like "I let the darkness set us free" or "May the darkness set us free". Either way, this episode was beyond fantastic and set up a perfect amount of questions for us all awaiting the second season. I'll make sure to make another post going through a couple theories and obviously having some fun ranting moments. Yellowjackets has mastered the art of compelling storytelling on television. I don't know about you all, but I can't fucking wait for next season. In the meantime, you'll find a video for a song that just gives me that end of Yellowjackets season vibe followed by a couple amazing tweets regarding the show. 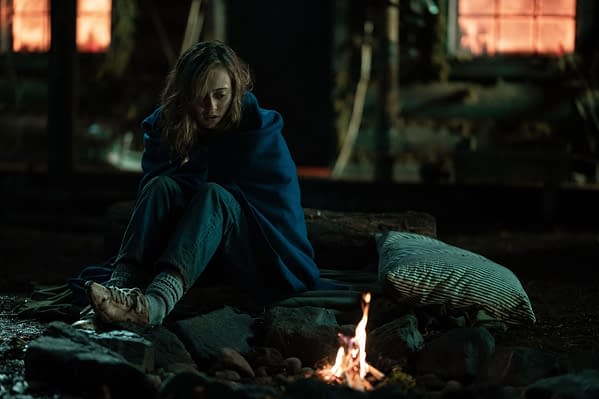 Review by Brittney Bender
10/10
Showtime's Yellowjackets concluded its first season on Showtime with a rollercoaster of an episode, with the series having mastered the art of compelling storytelling on television while also setting up some fascinating threads to follow through with during the second season (which officially, cannot come soon enough).
Credits
Network
Showtime

Bryce Dallas Howard will be directing an episode of The Mandalorian Season 3, while Dave Filoni will direct a number of episodes of Ahsoka.

Can't make The Mandalorian Experience at Star Wars Celebration? Then let these 80+ images of props, costumes & more, bring the event to you.

So it looks like love triangles run in the family based on the following preview images, overview, and promo for Walker S02E17 "Torn."

On August 5, LEGO Star Wars heads off on a "Summer Vacation" with a new special set for Disney+- now here's a look at the key art poster.

WWE SmackDown Preview 5/27: Will Anyone Be Suspended This Week?

Our preview for tonight's WWE SmackDown on FOX, with The New Day teaming with a mystery partner against Sheamus, Ridge Holland, and Butch.