With the Marvel Next Big Thing panel out of the way at San Diego Comic-Con, we now know what the X-Men's new status quo will look like in the Dawn of X era coming this Fall. And if you've been reading Matthew Rosenberg and Salvador Larocca's Uncanny X-Men, it probably looks a lot different than you'd expect. That's because the confirmed rosters of the new X-Books feature multiple characters that were recently killed off in Uncanny X-Men.

Let's take a look at the mutants who were featured in today's announcements that are currently dead, but will seemingly be back by the time the first wave of X-books hits stores in October.

Wolfsbane was one of the most controversial Uncanny X-Men deaths, as Rahne quit the X-Men only to be killed off-panel in Uncanny X-Men #16. When a flashback revealed the cause of her demise, Rahne had been sitting in a park when some men began sexually harassing her. When she got a little bit wolfy in her rebuttal, the men beat her to death and she refused to fight back.

But Wolfsbane is on the roster of New Mutants, which will be written by Hickman for the first arc, then Ed Brisson, with Rod Reis on art. Will Hickman explain how she returns? Or will he simply ignore Uncanny X-Men?

Another member of the New Mutants is Chamber, who was unceremoniously killed off in Uncanny X-Men #18. Chamber was involved in a battle with the Marauders in the subway, and, enraged at what he believed the team had previously done to the Morlocks (killed them, of course), Chamber burns them all alive. But before dying, Harpoon managed to get revenge on Chamber, striking a killing blow on the former Generation X star.

But Chamber, as well, is on the New Mutants roster this fall. Maybe he got better?

At least Sunspot wasn't technically murdered in Uncanny X-Men. Instead, he sacrificed himself in War of the Realms: Uncanny X-Men #3. The super-mega-crossover event tie-in mini-series was set before the events of Uncanny X-Men #16 despite coming out afterward, so Wolfsbane was starring in that book despite having already been killed off. Wolfsbane and her resurrected husband, Hrimhari, rescued Magik from the clutches of Sabretooth, but Magik was restricted from using her powers with a magic rock by The Enchantress. Sunspot, knowing it would probably kill him, crushed the rock so Magik could use her teleportation to save refugees and fellow X-Men under attack by Malekith.

Spoiler alert: he was right, and he was destroyed in the ensuing blast. Or was he? He's in New Mutants this Fall, so…

Matthew Rosenberg wasn't about to relinquish the reins of the X-books to Hickman without killing off more characters, and so that's exactly what he did in the final issue, Uncanny X-Men #22. One of those casualties was Havok, who sacrificed himself to save his brother, Cyclops, from a Warlock-Sentinel.

Havok was the first of several deaths in Uncanny X-Men #22, but he's right there on the cover of X-Men #1, the new core X-book launching in October. So maybe not?

Strong Guy was most recently killed in Uncanny X-Men #12, back before any of us had any idea just how bloodthirsty Rosenberg and Larocca could be. Strong Guy was amongst a group of X-Men who had ended up infected with the transmode virus as part of the New Mutants: Dead Souls mini-series, later to be rescued by Cyclops and Wolverine from a O.N.E. prison. But as the group made their escape, it turned out a Jamie Madrox dupe had been implanted with a bomb, and Strong Guy absorbed the blast to save everyone else at the cost of his own life.

But Strong Guy was amongst a massive list of characters on a graphic debuted at the panel at San Diego Comic-Con Saturday, indicating he's one of the characters that will appear at some point in the core X-Men series. Dead just isn't what it used to be.

In Uncanny X-Men #22, Jamie Madrox led a heroic charge of dupes in a sacrifice just to help Wolverine get close enough to General Callahan to kill him off. Why Jamie couldn't have made just one extra dupe in order to avoid dying himself, who knows. But he didn't, and so…

But Multiple Man didn't just have one death in Uncanny X-Men #22. There was technically a separate Jamie duplicate, the one that merged with Warlock to become Warlox. Of course, Warlox was having troubles of his own, having wiped out his own memory in order to erase the programming of the Warlock-Sentinels in Uncanny X-Men #22.

And then dying with no memory of his friends.

Tragic. But then again, who cares? Everyone is coming back so what even matters?

Magik didn't technically die in Uncanny X-Men, but in the pages of Uncanny X-Men #21, she did have her mutant powers taken away by General Callahan, which caused her to lose complete control of her Darkchylde half, which promptly took over. The X-Men quickly abandoned her because at this point in the storyline, losing X-Men hardly even mattered anymore.

But by the time New Mutants rolls around, Magik will be back to her normal self, it seems, as if none of this ever happened.

Those weren't all the characters killed off in the past 25 issues of Uncanny X-Men, which means there are even more deaths that Hickman could intend on undoing, even if they haven't yet shown up in the teaser art for the Dawn of X. Take a look at this graphic and let us know if we missed any. 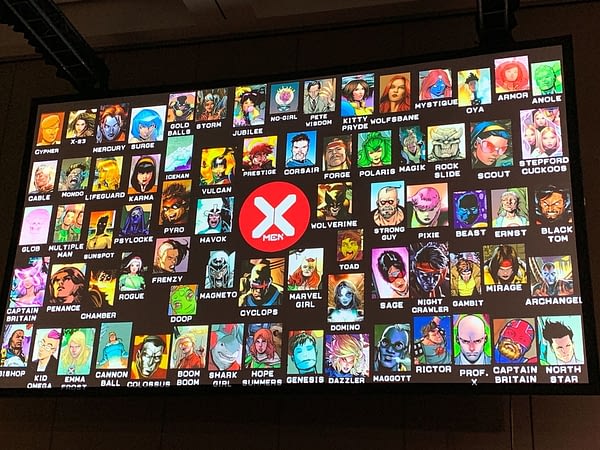 Dawn of X kicks off in October, and you can see all the solicits here.

Scooby-Doo: Where Are You #117 Preview: Worst Nightmare

Scooby and Shaggy face their worst nightmare in Scooby-Doo: Where Are You #117... a monster who goes after the food.