With a terrifying fidelity to the Tim Burton cinematic vision, this issue elevates the Two-Face we all really deserved to epic heights in Batman '89 #5. The story takes on tragic tones evocative of the Scottish play and miraculously makes the right narrative choice to put the dark knight detective in a supporting role.

There are a lot of wonderful little details in this book that make it fantastic. The discussion of what happens to henchmen after super villains fall to a hero is both fresh and engaging. The matter-of-fact reaction of Barbara Gordon to her not-so-subtle protection detail is a great character element. The introduction of the "intern" Robin outshines everything Chris O'Donnell could have hoped for, and the fact we didn't get this to be the breakout role for some young actor has deprived us of a megastar today. Finally, the plot ascends into a gigantic, bombastic heist in one of the most unlikely places in Gotham and even finds a way for the Catwoman to influence the plot in a clever and fitting way.

Writer Sam Hamm is writing some of the most enjoyable Batman stories in years, if not decades, as he keeps the focus on everybody. Still, Bruce Wayne allows the Bat to maintain different notes and modes, from comic relief to shock and awe. That's something we rarely see from anyone not named Ghost-Maker. The artwork from Joe Quinones, Leonardo Ito, and Clayton Cowles likewise use this neon Cross Colours vibe like a rapier, slashing cleverly at the expectations we have and leaving a beautiful work of mayhem-colored art.

We may be able to see Michael Keaton back on screen in a Bat-suit, but we will never be able to get this cinematic masterpiece in pre-pandemic multiplexes. That's a shame, but wow, to make that work as a comic book is no small accomplishment in and of itself. RATING: BUY.

Batman '89 #5
By Sam Hamm, Joe Quinones
Harvey Dent enacts his plans for Gotham! He'll overthrow the Batman and assume his rightful place as its guardian. As Batman works to stop his friend Harvey, he finds himself vastly outnumbered by the forces at Harvey's disposal. He'll need to turn to some unlikely allies if he's going to turn the tide in his favor to protect his city and save his friend! 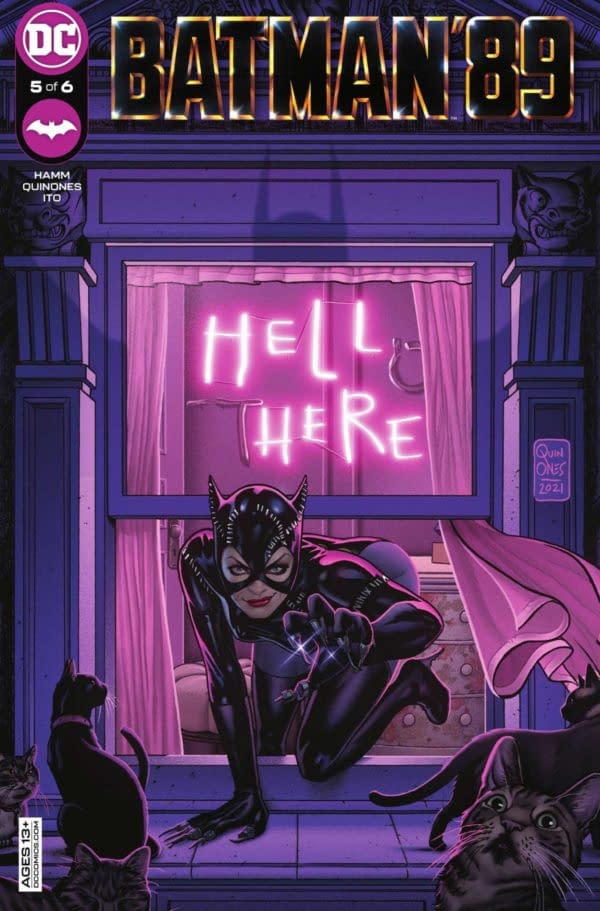 Review by Hannibal Tabu
8/10
The likeness of Billy Dee Williams gives you Two-Face in ways Tommy Lee Jones could barely comprehend, and this cinematic masterpiece somehow doubles as a comic book one too.
Credits
Editors
Katie Kubert, Andrew Marino

Achieving a lifelong dream of the comic book industry, this preview of Harley Quinn Uncovered #1 unveils a comic consisting of nothing but variant covers.

Magik tries to explain why she put the Goblin Queen in charge of Limbo and caused a crossover event in this preview of Dark Web X-Men #1.

Lady Cop keeps some juvenile delinquents in line with a mixture of threats and diplomacy in this preview of Danger Street #1.

Monica meets her biggest fan in this preview of Monica Rambeau Photon #1... now if only she can get her to use her new name.

Dark Crisis Big Bang #1 Preview: Not What it Sounds Like

Spider-Man races across New York during a crossover event to meet up with Norman Osborn in this preview of Amazing Spider-Man #1, but another Spider-Man got there first...