With his own version of the Bat's nocturnal infrastructure, Duke Thomas has shone brightly as an Outsider, and in the We Are Robin series of years past to find his place in broad daylight as Gotham's sunshine soldier. This is done with great elements, but Batman Secret Files: The Signal #1 hit some snags along the road.

First, let's look at the challenges. Signal starts out the book by successfully managing hand-to-hand combat with Cassandra Cain (whose first language was violence, the daughter of Lady Shiva, trained to be lethal since childhood) … and then ending up on his butt looking up at two untrained former friends and then with a boot on his head (and yellow will surely show boot marks). Likewise, Bruce Wayne spends a decent bit of this issue on the back foot, despite achieving his actual goal, resorting to pettiness as Duke accidentally solves a mystery the Bat can't. Then, something happens involving Duke's powers (which have one of Miles Morales' gags, if you think about it) that's not exactly clear how it worked. Already a little weird.

On the other hand, the protocols for the "night shift" to hand off to Duke and his We Are Robin partner (who seems a little jealous and possessive) Izzy Ortiz, who has "clearance" from Batman to be read in on the family business are spot on. There's a lot of character work done in a very small amount of space, and that's really good. Likewise, the visuals presented by Christian Duce, Luis Guererro, and Andworld Design are strong, striking, and wonderfully shift between the night (where even a white stroke on Batman's cape, for all the Photoshop users, makes a huge difference) and the day (with bright colors, like the red used for a pivotal silhouetted moment, or the gold shaded floors of a criminal version of Comic-Con. The Crime Bible pops up, and that's always the root of some kind of kookiness. Writer Tony Patrick layers on elements of continuity and flashbacks and even a wonderful moment of doubt for Duke that built his character really well.

All around, this was a mixed bag that was strong on concept but stumbled in execution a few times. It's worth watching to see how this title, its creative team, and its ambitious young hero will develop as time passes. RATING: HONORABLE MENTION.

Batman Secret Files: The Signal #1
By Tony Patrick, Christian Duce
The Signal comes back as Gotham City's daytime protector after his time with the Outsiders. But during his sabbatical from his hometown, everything about the city and the people closest to him changed. And the mystery of the White Market, a deadly source of weapons being trafficked into Gotham City that even Batman can't track down, will only push the Signal further away from everything he knows and into a brand-new world of danger. Writer Tony Patrick returns to pen a new chapter in the life of Duke Thomas alongside fan-favorite artist Christian Duce! 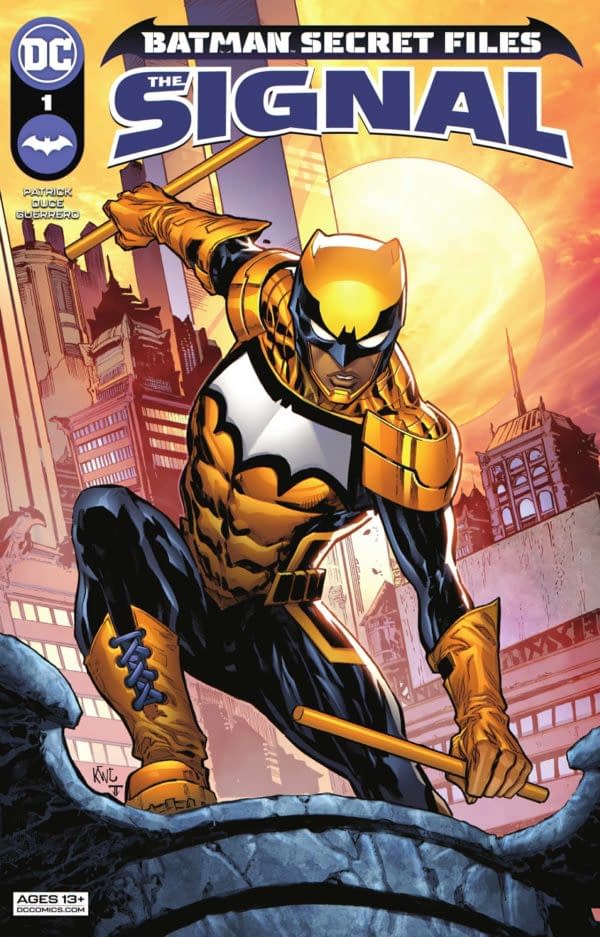 Review by Hannibal Tabu
7/10
Things are looking bright for Gotham’s new daylight defender, if he could just find his footing and showcase the brilliance people keep talking about.

There are seven matches and segments planned for AEW Dynamite Anniversary tonight, and every single one really cheeses The Chadster off!

NYCC! New York Comic Con starts tomorrow. And there will be plenty of creators and publishers selling - or even giving away - stuff that is exclusive to

Get a sneak peek at the comic that expands on the universe of the TV show: Kamen Rider: Zero-One #1, coming in November from Titan Comics.

Promoting their schedule of events at New York Comic Con, DC Comics has revealed a new look at the Superman family, and everyone is getting new costumes.

Chris Choi has Auctioned How To Be American to Scholastic Graphix

Chris Choi, also known as Chris Danger, artist of The Inflatables series, has just sold the publishing rights to his new middle-grade graphic novel How to