Eat The Rich recalls what Margaret Atwood said to Kelly Sue DeConnick regarding Bitch Planet: "oh, you think it's satire?"

Hugo award-winning writer Sarah Gailey had a pitch that would become Eat The Rich, and to some people, it seemed unbelievable. The 1% are secretly cannibals and eat their servants, who are forced into cannibalism as a part of their role. Who would take a job that would require cannibalism and the employee's eventual murder? Answer: Anyone who's ever worked a terrible job because they needed health insurance. That part's not hard to believe.

Eat The Rich ends abruptly and almost too easily, which is at odds with the comic up until that point. That part is hard to believe.

Pius Bak and Roman Titov's work is best exemplified by the page below. It looks easy, but the colors are just right, and Bak adds the bridge's reflection in Joey's sunglasses. No one would've noticed if Bak didn't include the bridge's beams in the sunglasses, but Bak did, and the page is enriched because of it.

Letterer Cardinal Rae was given a lot of work to do with overlapping word balloons and maintaining Gailey's voice, which meant Rae had to switch between different fonts within the same conversation to indicate speaking differently.

Sure, Eat The Rich is satirical, but satire reveals the truth: Ordinary people are forced by capitalism into dehumanizing jobs that exploit them cruelly for necessities. The horror or satirical elements in Eat The Rich are the easiest to believe.

WELCOME TO CRESTFALL BLUFFS! With law school and her whole life ahead of her, Joey plans to spend the summer with her boyfriend Astor at his seemingly perfect family home. But beneath all the affluent perfection lies a dark, deadly rot… something all the locals live in quiet fear of. As summer lingers, Joey uncovers the macabre history of Crestfall Bluffs, and the ruthlessness and secrecy lying in wait behind the idyllic lives of the one percent. Who can Joey save? Who wants to be saved? And can she even survive to tell the tale? The bold, horrifying psychological thriller from Hugo Award-winning author Sarah Gailey (The Echo Wife, Magic For Liars) and artist Pius Bak (Firefly, The Magicians) with colorist Roman Titov and letterer Cardinal Rae. Collects Eat the Rich #1-5. 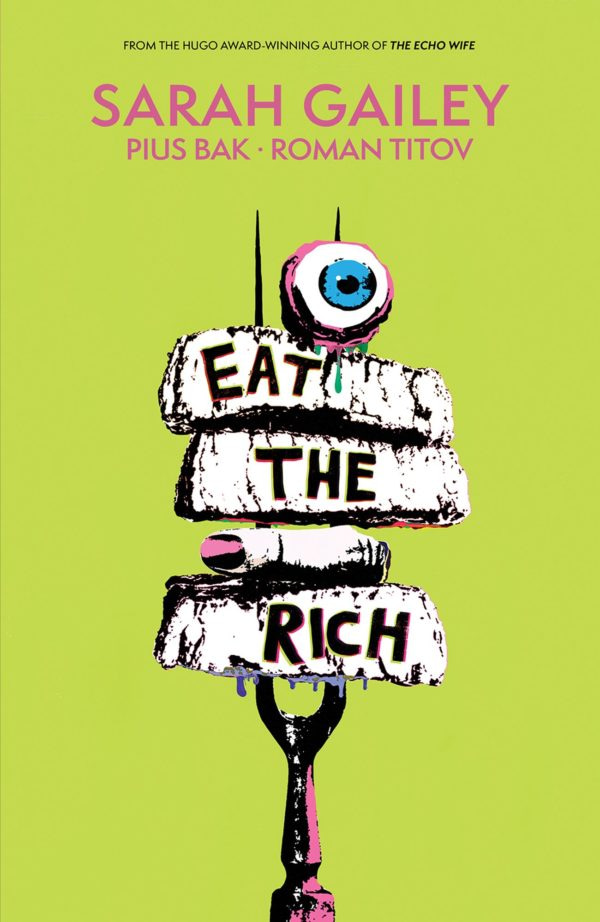 Review by James Hepplewhite
7/10
In Eat The Rich, the horrific or satirical elements about the ultra-rich and their secret lives are the easiest to believe.
Credits
Writer
Sarah Gailey
Artist
Pius Bak
Colorist
Roman Titov
Letterer
Cardinal Rae