The task of Fortnite X Marvel: Zero War (2022) #1 is to make the toys play nicely with each other. You know what Fortnite is, but on the off chance you don't, it's a videogame vaudeville Battle Royale played on an ever-constricting map.

Christos Gage and Epic's Chief Creative Officer, a man called Donald Mustard, write the comic, and it largely doesn't draw me into the Fortnite characters. Maybe that's ignorance of the setting? Regardless, even in the costuming, the Fortnite characters look bland next to their 616 counterparts. It's not entirely fair to Fortnite to compare the two, as Marvel has half a century-plus to refine their character designs, and Fortnite hasn't. Then again, not every striking design is usable in a videogame, which has different masters to serve than comics.

Fortnite X Marvel: Zero War (2022) #1 features the art of Sergio Dávila and the colors of Edgar Delgado. They have the complex and thankless job of making the characters visually relate to each other. There are a couple of fun nods to classic Marvel comics art, the one that sticks out to me is where Spider-Man swings across a page while carrying a person in his other arm.

In Fortnite X Marvel: Zero War (2022) #1, the toys play nicely with each other, but the end result is an oversized issue that's somehow less than the sum of its parts. Maybe the best everyone can hope for is that the Fortnite player who bought the comic for the in-game cosmetic will read this issue between games?

THE MARVEL UNIVERSE COLLIDES WITH FORTNITE! The inhabitants on the Island are locked in what seems like a never-ending war, and only one thing has the potential to turn the tide – a crystallized fragment of the Zero Point that was cast into the Marvel Universe. Spider-Man and Wolverine team up with several Fortnite fighters and new recruit Shuri to hunt down the elusive Zero Shard. Will these allies be able to find it in time and avert catastrophe? And can the heroes of the Marvel and Fortnite realities hold off the Imagined Order long enough to give them a fighting chance? Epic Games' Chief Creative Officer, Donald Mustard, teams up with veteran Marvel writer Christos Gage (SPIDER-GEDDON, AVENGERS ACADEMY) and artist Sergio Dávila (CAPTAIN MARVEL) for a five-part crossover event with enormous ramifications for both universes! Each first print issue contains a redeemable code to unlock a bonus digital cosmetic in Fortnite! See issue for details. 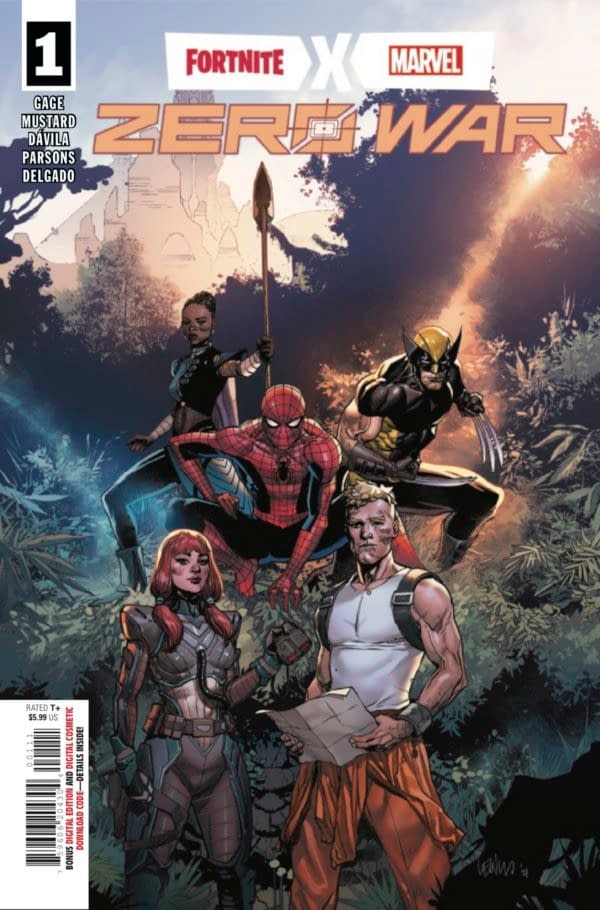 Viz launches a new manga by Chainsaw Man's Tatsuki Fujimoto in Viz Media's September 2022 solicits and solicitations. Look Back is a story about the art

The titular Monkey Prince explores his family history in this preview of Monkey Prince #6... can he overcome his Monkey Daddy Issues?

After helping to pioneer the horror comic book in 1947, Avon returned to the genre during the Pre-Code Horror boom with an Eerie series.

X-Cellent #5 Preview: The Fate of Fluff

Fluff has been splattered like a ripe tomato in this preview of The X-Cellent #5, in stores Wednesday from Marvel.

The solicit promises the fall of Batman Beyond in Batman Beyond: Neo-Year #4, but it doesn't happen in this preview. At least, not yet.