They may no longer be publishing a Rick & Morty ongoing series, but Oni Press has one-shots and mini-series aplenty. In their August 2020 solicitations, that means Birdperson getting their own comic book, and the finale of the Rick & Morty Goes To Hell mini-series. And all this comes alongside original graphic novels Titan from Francois Vigneault, Dead Dudes by Christopher Sebela and Ben Sears, and Tea Dragon Tapestry by Katie O'Neill and Smoove City by Kenny Keil. Here's the full solicit.

In "Birdperson's Rite of Passage," see Birdperson's growth from Birdteen to Birdadult…and a friend to Rick Sanchez, but only after they go through an incredible adventure unites them…forever?! RICK AND MORTY GO TO HELL #4 CVR A OROZA 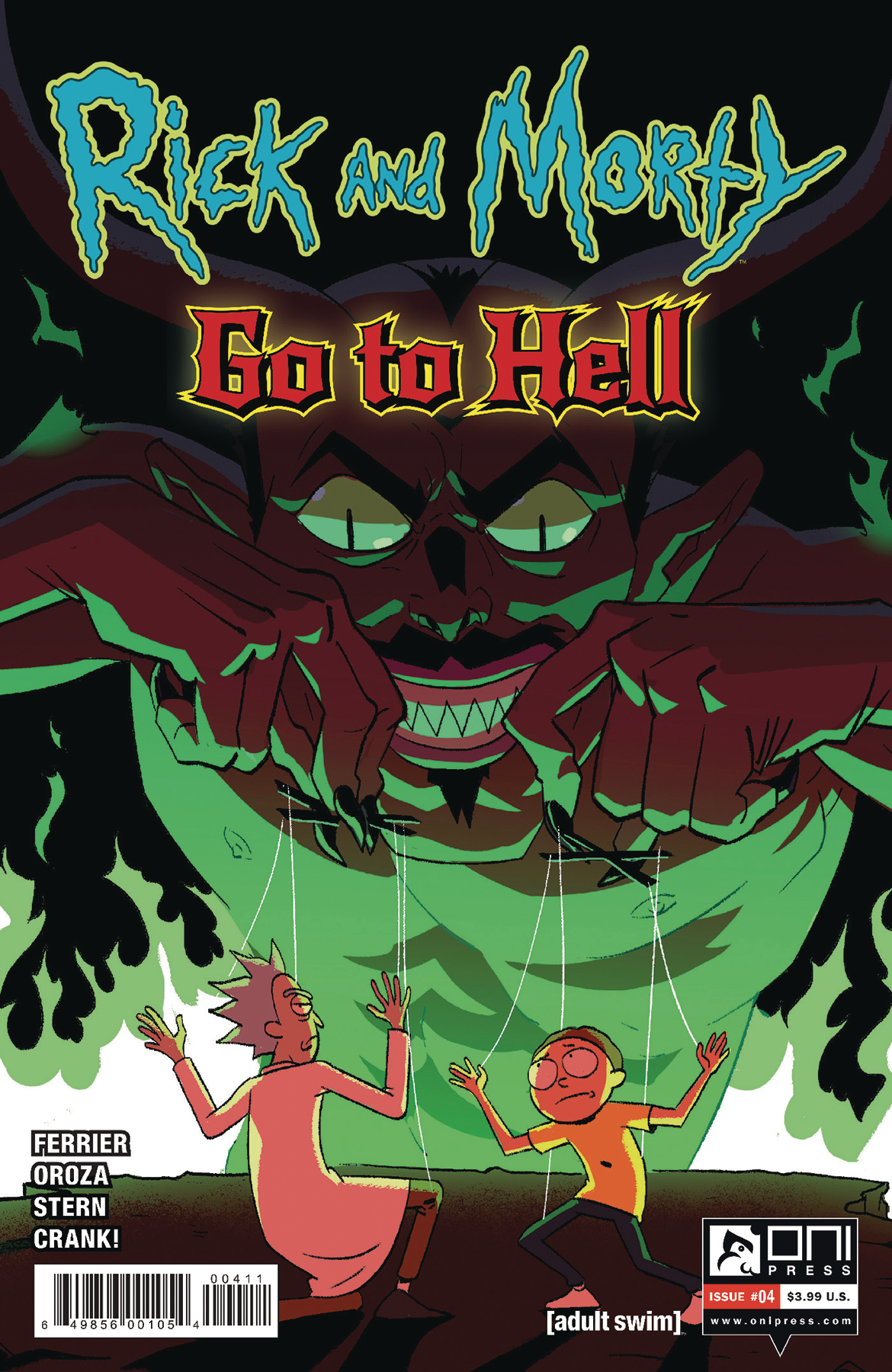 Nearing the end of their journey through Hell, Rick and Morty must face their greatest challenge yet, one that will reveal the true nature of their souls. Can our titular heroes overcome the Devil's task before Hell collapses under civil war?

RICK AND MORTY GO TO HELL #4 CVR B ENGER 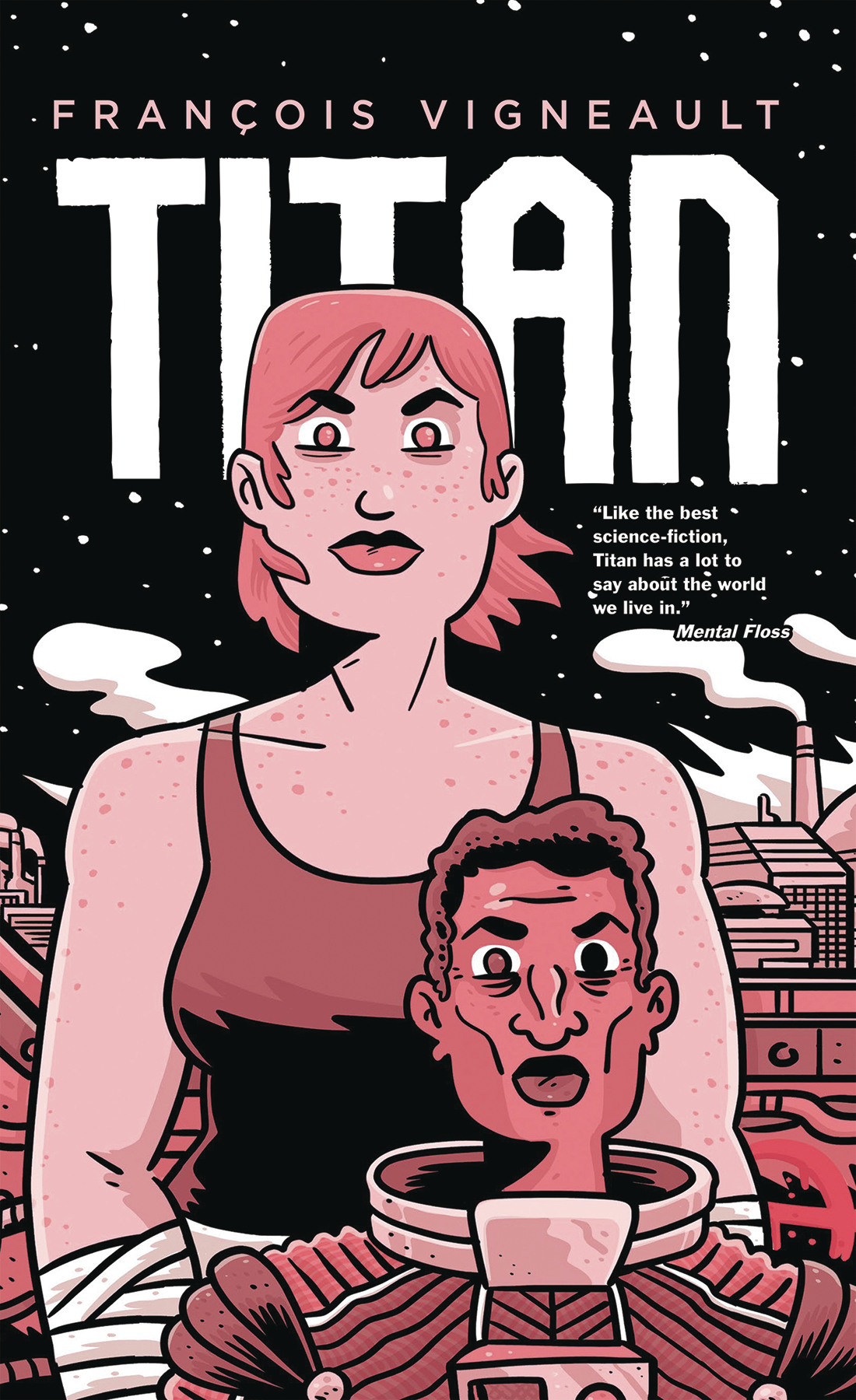 When MNGR First Class JoÃ£o da Silva arrives on the moon of Titan to take charge of Homestead Station, he finds the massive mining colony plagued by tensions between the giant, genetically-engineered Titan workers and the Terran management. As anger mounts, what began as a routine posting quickly turns into something far more dangerous.
Phoebe Mackintosh thought she left her fighting days behind her when she turned her back on the "mixing" circuit. Now, she finds herself caught between a past she'd rather forget and a future she can't predict.
Together, they must find a way to pull Homestead back from the brink of disaster… Or Titan might be the spark that sets the entire solar system ablaze. Trev, Kent, and Brian are allegedly friends, but are best known as the backbiting hosts of the popular ghost hunting show, Ghost Bros. With ratings falling and competition rising, they gamble it all on the Chernobyl of haunted locations: Edgeway Penitentiary, where the Ghostbros find conclusive proof of the afterlife… After they die and come back as ghosts themselves, trapped there with the angry ghosts who killed them!
Now that they're deceased, the Ghostbros have to be the best DEAD DUDES they can be, prove to the world that ghosts exist, and save the lives of their most hated rivals (Oh yeah-and to save the living from a ghostly armageddon, but whatever). 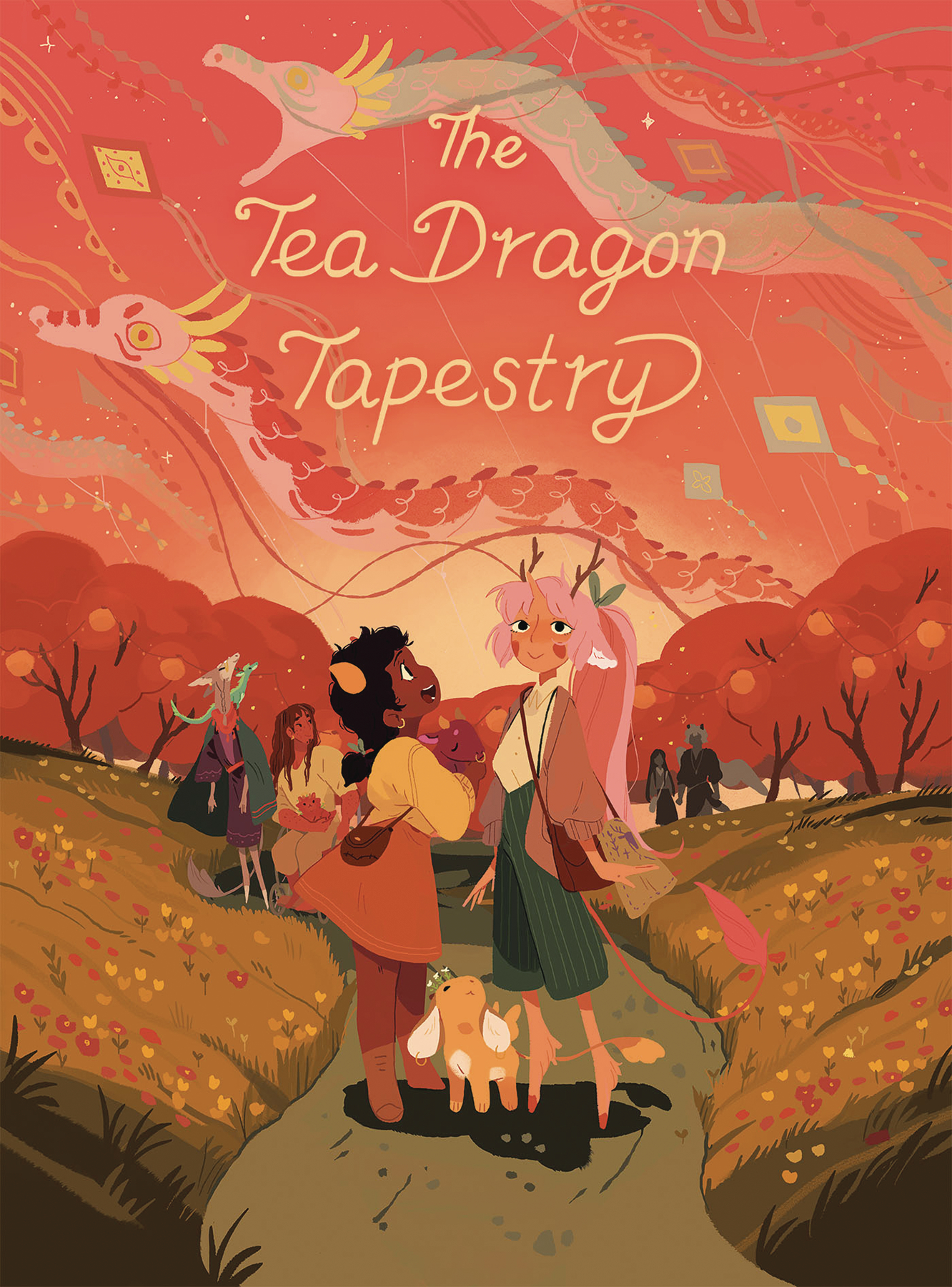 Join Greta and Minette once more for the heartwarming conclusion of the award-winning Tea Dragon series!
Over a year since being entrusted with Ginseng's care, Greta still can't chase away the cloud of mourning that hangs over the timid Tea Dragon. As she struggles to create something spectacular enough to impress a master blacksmith in search of an apprentice, she questions the true meaning of crafting, and the true meaning of caring for someone in grief. Meanwhile, Minette receives a surprise package from the monastery where she was once training to be a prophetess. Thrown into confusion about her path in life, the shy and reserved Minette finds that the more she opens her heart to others, the more clearly she can see what was always inside.
Told with the same care and charm as the previous installments of the Tea Dragon series, The Tea Dragon Tapestry welcomes old friends and new into a heartfelt story of purpose, love, and growth. Ray, Ronnie, Vinnie, and Mikey (A.K.A. Smoove City) are four besties dreaming of boy band stardom. At the mall food court, there's lots of time for daydreaming. But all that changes when they finally scrape up enough money to record a demo tape – one they're sure will land them a big-time record deal. ?Instead, their demo tape swerves them into a very un-smooth world of shady managers, smelly tour buses, and a huge misunderstanding that transforms them from unknown wannabes to pop star outlaws overnight. Their dream is finally coming true… But it could cost them a lot more than a slice of food court pizza.
Deeply inspired by the music and culture of New Jack Swing, Smoove City is a funny and heartfelt story about fame, friendship, and why all that glitters ain't double platinum. 1991-Val, a teenager from a conservative family, has grown up dreaming of becoming a ballerina, but recently something has changed. She's begun feeling pressure to conform to a specific idea of beauty, body type, and a personality that just doesn't fit.
Val meets Kat, a smart, witty girl that doesn't take any crap off anyone. Kat introduces Val to punk rock. Along with Rudie, another new friend, the three form an all-girl punk band they ironically name The Proper Ladies.
Soon Val and her friends find themselves caught up in a movement with other girls also starting bands-also finding their voice. Collectively, these "riot grrrls" discover that their songs ring out loud and powerful, and for Val, there's no going back. 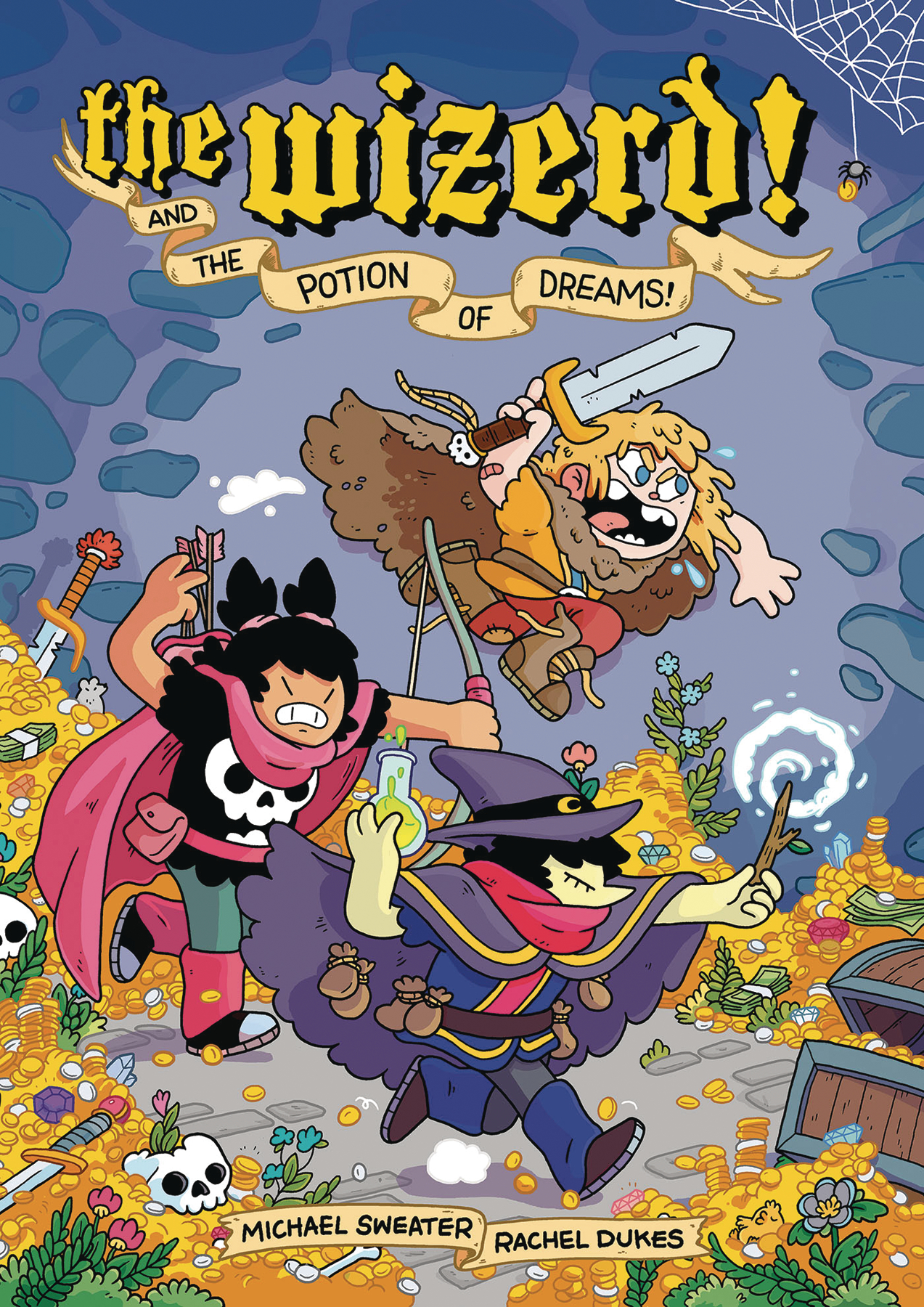 Adventure awaits! A quest is coming! Excitement envelopes all! …And it's disturbing a reclusive, young wizerd's peace and quiet!
A garden-tending wizerd is dragged into the adventuring life by a small warrior princess as they seek the ingredients of a wish-granting potion. (The warrior princess's wish? To get big and strong – and hunky! – really hunky!) Thanks to ransacking goblins, a too-noble knight, an evil wych, and the warrior's endless appetite, securing the potion ingredients won't be as quick or as simple as the wizerd had hoped!
The Wizerd and the Potion of Dreams packs humor, heart, and heaps of distractions into a fantasy adventure sure to please any adventurer out there.

THIS IS A FLYING RAT HC This is a book about pigeons…
"You mean 'flying rats'? Pigeons and flying rats are basically the same thing!"
Pigeons are considered one of the best flyers in the world.
"Pigeons and flying rats are NOT the same thing. This book is about pigeons. Pigeons that can FLY!"
From the creators of This Is a Taco and This Is a Whoopsie, Andrew Cangelose and Josh Shipley are back with a humorous tale of a "flying" rat and pigeon finding friendship despite their differences. Ancient writings reveal the secrets of the terrible force at work on Lonely Orphan. The secrets might unlock the means to escape the murderous planet. First though, the stranded crew of the salvage vessel Cortes must survive a group of aliens who wish to sacrifice them… and the elder god that the aliens worship. The Glass family find themselves in a boneyard of technology-a long abandoned arcade turned apothecary-fighting to keep Valencia alive. But in order to do so, they're going to have to place their trust in the very same people they left for dead thirteen years ago. The time has finally come, once again, for the Carrier Man Trading Company's most anticipated event of the year – The Carrier Cup, an Olympic-esque competition in which different departments battle it out in office-specific "sports" to see who will reign supreme. Will Retsuko be able to redeem herself, after her fateful blunder from the previous year, and bring home the gold for Accounting? A parody of sports anime and manga, such as Prince of Tennis, Slam Dunk, and Haikyu!! In Calcutta, Henry learns from his mother the truth of what happened with her and his father, Screaming Crow. She warns him that a vile assassin–a fae creature named Asha–is after him
and his powerful blade. Across town, Barry has arrived and–along with his new allies–is homing in on the location of Henry. In England, Kalfu and Abigail meet with one of his "professional contacts" in search of information on Henry's whereabouts.

Trial of the Amazons is the first Wonder Woman crossover event in decades, and DC Comics are going to be sending comic book stores temporary tattoo

Lucifer, Limbo and Homesick Pilots writer Dan Watters is writing a new, fully-authorized graphic novel adaptation of the 1976 movie The Man Who Fell To

The God Of Hammers In The Daily LITG 27th January 2022

DC Comics has announced that Anne DePies has been named Senior Vice President and General Manager of DC Comics. This comes after Bleeding Cool broke the

Trial of the Amazons is the first Wonder Woman crossover event in decades, and DC Comics are going to be sending comic book stores temporary tattoo

Lucifer, Limbo and Homesick Pilots writer Dan Watters is writing a new, fully-authorized graphic novel adaptation of the 1976 movie The Man Who Fell To

The God Of Hammers In The Daily LITG 27th January 2022

DC Comics has announced that Anne DePies has been named Senior Vice President and General Manager of DC Comics. This comes after Bleeding Cool broke the