With a post-apocalyptic setting and a looming sense of urgency like vultures circling overhead, the latest brainchild of writer David Pepose raises the stakes for Kit, a red-haired, teenaged member of the Ranger Scouts. Patterned after a discovered guidebook for survivalists, this male-only organization acts as a brand of frontier justice, working to impose some kind of civilization on a lawless land. Unfortunately, the events of the last issue show a stormy center for this silver cloud. Given that Kit is Mulan-ing it in masquerade, that just ratchets the up tension in Scout's Honor #2 even higher.

There are four big emotional beats in this issue that make it really stand up. Spoiling them would be poor form, but suffice it to say that Kit's new understanding of the origins of the Ranger Scouts gives "him" dire misgivings about how to manage the brutal circumstances.

Speaking of brutal, there is a kind of poetry to the visuals presented by Luca Casalanguida, Matt Milla, and Carlos M. Mangual. An early panel shows an arc of blood from ritual combat, making a crescent over the meaningful captions underneath. That panel could have gone a lot of ways, but it chose to find the artistry in violence, and that's indicative of a lot of what happens here. When an arrow flies or a punch is swung, or even a twig is snapped underfoot, it presents an immediacy that gives these still images much more motion than one would expect. Likewise, the framing of the last panel, with the silhouetted face and the clear lines of the uniform of office … those choices are very effective.

When push, as it inevitably does, comes to shove, the choices made here frame characters with determination and struggle, not icons but truly fleshed out characters trying to figure it out when literally the whole world seems poised against them. RATING: BUY.

Scout's Honor #2
By David Pepose, Luca Casalanguida, Andy Clarke
Ever since the bombs fell and the skies turned to nuclear fire, the Ranger Scouts of America have built their religion upon their most sacred law – always be prepared. But after discovering a chilling secret in an abandoned bunker, Kit's belief in the Scout tradition is rocked to the core – yet when a gang of murderous highwaymen breach the Ranger Scout compound, her growing doubts might come at a harrowing cost … 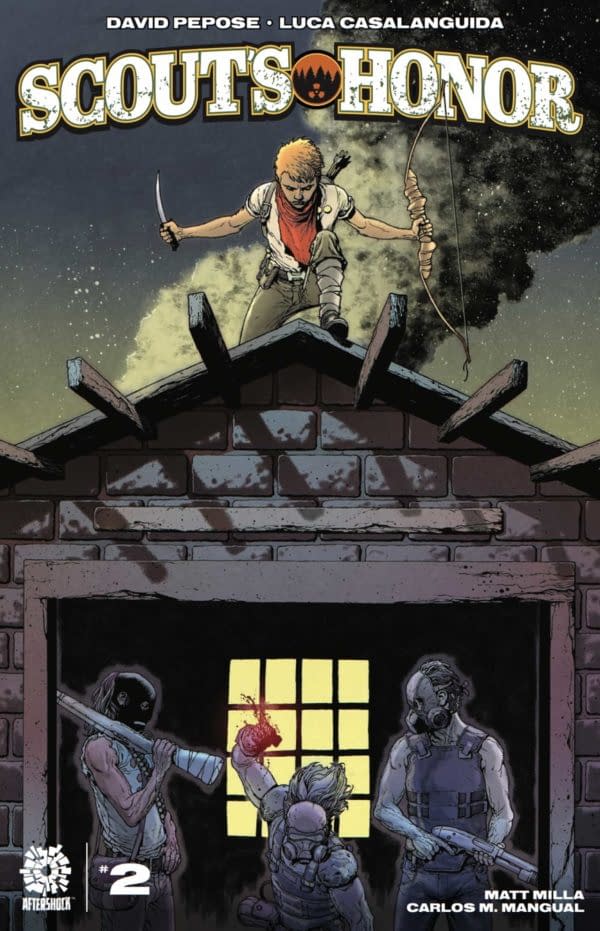 Review by Hannibal Tabu
8/10
This postapocalyptic Mulan has much more complications enter life with an unwelcome surprise from a friend, a tragedy hitting home and political maneuverings.
Credits
D
D
M
M
C
C
A
A

Someone targets a Bang Baby meetup as Static season two begins in this preview of Static: Shadows of Dakota #1.

Daredevil #8 Preview: In This Preview, Punisher… MUST DIE!

Daredevil and Punisher go head-to-head in this preview of Daredevil #8, and Matt plans to send Frank back to hell.