A month or so ago, we broke the news that Tim Drake, Batman's third Robin, would be revealed as a bisexual young man. In the Batman: Urban Legends comic book from DC Comics, he was seen going on a date with an old schoolfriend Bernard Dowd. Many news headlines followed our confirmation last week, full of headlines about a bisexual Robin. Not something entirely backed up by the comic book in question which stuck to the bi-curious possibility, but later confirmed by DC Comics publicity. A few people wondered what would be next.

This curiosity led to the rumour mill spinning in the direction of Jonathan Kent, the young adult son of Clark Kent and Lois Lane, and current lead of the Superman: Son Of Kal-El comic book series by Tom Taylor and John Timms. In DC Comics continuity, the original Superman, Clark Kent is traveling to a distant planet WarWorld and leaving his son behind as the Superman of Earth. In a future comic book storyline, Future State, we saw Jonathan Kent remaining as the Superman of Earth while his father was trapped for years on WarWorld. And while current storylines are teasing that version of the story, which would have been the new status quo if DC's 5G publishing plan had gone ahead, we presume that the status quo will at some point be returned. Because that's what generally happens with superhero comics.

But that hasn't stopped headlines hitting the comics outrage press. You know, the kind of sites that monetize knee-jerk reactions of divisiveness in an anti-virtue circle jerk. And then the geek clickbait sites (okay, more-clickbaity-than-us sites) who don't actually examine what's actually going on follow up. But it was also then picked up by gay-themed news sites, who think this is some kind of DC PR release. And also repeating claims that this is somehow an attempt to stop paying Superman royalties to the estates of the character's creators from DC by making Jonathan Kent the main Superman. So it's time for Bleeding Cool to step in, talk to some actual sources, and run some spoilers to let you know something a little closer as to what is going on.

First, Jonathan Kent is indeed becoming the Superman of the DC Comics Universe while his dad is away. But this won't have any effect on the way Superman creators Jerry Siegel and Joe Shuster will be credited and their estates paid whatever payments would be due for the use of any Superman or Superman-derived character. You can see that with DC's use of Supergirl, a character they had no hand in creating, yet get the credit and payment. Whoever is DC's Superman, Siegel and Shuster will get the same agreed credits and recompense. Not the billions they should have got, of course, but that's another story.

But as for Jonathan Kent's sexuality? Well, yes, that is definitely up for discussion. Before DC Comics' 2020 5G plans were abandoned, Jonathan Kent was intended to have a relationship with Jenny Sparks/Quantum of the Authority. But now? Jonathan Kent is a human/Kryptonian hybrid, and DC Comics is currently intending him to be portrayed as a queer young man, though the exact labels are up in the air. Or up in the sky. Gay, bi, pan, it may be a while till this comes to fruition on the page. However, that is only one part of the parcel that is Jonathan Kent. Tom Taylor has stated that "He gets one very good friend very early on, by issue three. Someone that he can talk to, that can be a confidant like Damian Wayne. And they're going to have a big role in this." And in today's Superman; Son Of Kal-El #2, we meet that friend, Jay Nakamura who is inspiring Jonathan Kent Superman to act in a more political fashion. So who knows where that might lead? 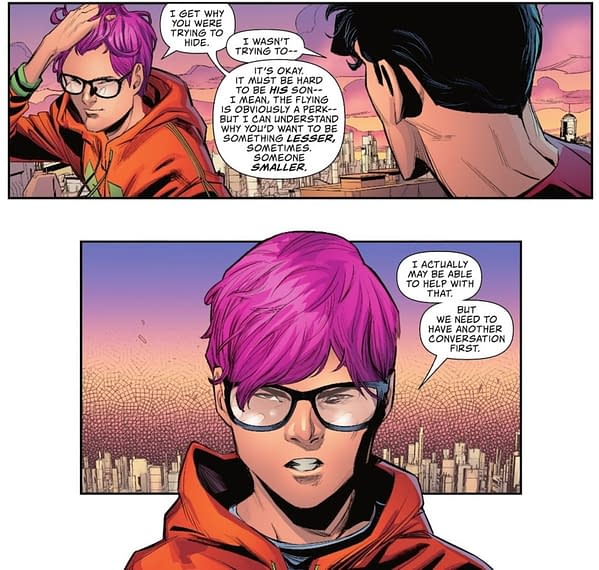 Or he could be a complete reddish-hued herring. Nevertheless, here's the cover of Superman; Son Of Kal-El #5 for November, with Henry Bendix of Stormwatch, the precursor to The Authority, now the President of Gamorra who Jonathan Kent has just offended, looming over as Jay Nakamura is caring for a prone Jonathan Kent Superman…

Evanescence Gets Their Comic Book From Opus Comics

Evanescence is an Arkansas rock band formed in 1995 by singer/songwriter/musician Amy Lee and guitarist Ben Moody and their first full-length album,

The Matrix Comics are a group of short stories, comics and pin-ups set in the Matrix universe. Originally published in 1999 on the Matrix website, ahead

Archie Comics is publishing a new Riverdale horror anthology, about the tales that Jinx tells to those she babysits for, from Magdalene Visaggio, James