With a brilliant framing device, The Last Annihilation: Wiccan & Hulkling #1 does a lot of great things in terms of presenting character, coming up with an interesting struggle, and even doing well to depict young love. The crossover, honestly, could almost be an afterthought as nothing that happens here affects the larger story. This self-contained moment, at least, is enjoyable on its own.

The Dread Dormammu has basically absorbed Ego the Living Planet to become a galactic-class threat, sending waves of his Mindless Ones to conquer worlds and establish a beachhead for him. This has forced Billy Kaplan and Teddy Altman — the young heroes called Wiccan and Hulkling, now court wizard and emperor of the combined Kree-Skrull alliance — to split their forces and defend the homeworlds of Skrullos and Hala separately, with a little help from the mutant nation of Krakoa's S.W.O.R.D. forces. The two separate battles are shown, interspersed with Kaplan and Altman's teenaged courtship and relating to the supporting characters all around.

For his efforts, Anthony Oliveira's script does a great job of staying focused on the characters here, making supporting players like mage Mur-G'nn or inter-dimensional "sister" to the emperor Phyla-Vell have their moment in the sun. Likewise, the artwork from Jan Bazaldua, Rachelle Rosenberg, and Ariana Maher manages the very challenging issues of depicting the cosmic struggle and adolescent love with equal aplomb. Best of all is a third-act surprise straight out of Marvel vs. Capcom that changes the game for each battle, wonderfully developed through the narrative, and in that, we got a great emotional beat that really connected.

If this were a story on its own, this would have been a winner. However, given how little effect this story has on what's going on with the Last Annihilation crossover, all these savvy choices get lost in the mix. It might be nice to see Oliveira on a book like Guardians of the Galaxy, but that's a quest for another day. RATING: HONORABLE MENTION.

The Last Annihilation: Wiccan & Hulkling #1
By Anthony Oliveira, Jan Bazaldua
WORLDS APART, BUT NEVER ALONE! The Last Annihilation has hit the Kree/Skrull Alliance. Wiccan and Hulkling must split up to simultaneously defend two planets against the Mindless Army! But will the individual newlyweds be enough to fight off the forces of Dormammu? Or will they become the next casualties in this senseless war? 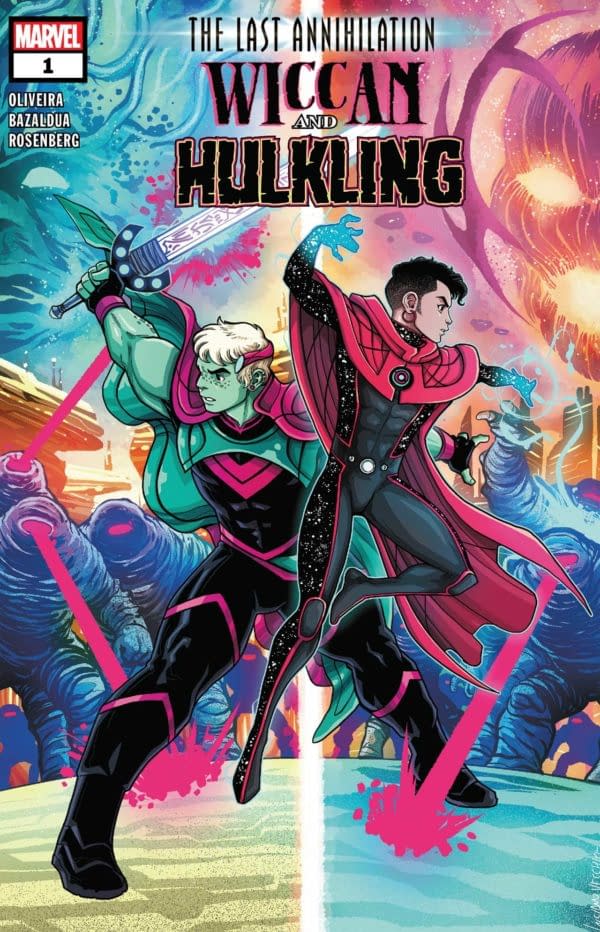 Review by Hannibal Tabu
7.5/10
What could make a lengthy, largely pointless crossover a little brighter? True love, shining across the stars.

The Nice House On The Lake #6 Review: Engaging

One of the most clever, most engaging books on the shelves steps it up a notch this month. The Nice House On The Lake #6 introduces everyone to The

In Superman: Son of Kal-El #5, an unexpected boost of power for Jonathan Kent has him zipping around the world and trying to do everything. Little does he

Some Advice for Whoever Gets the GI Joe License After IDW

If a new publisher picks up the GI Joe license as Bleeding Cool reported, we have one piece of advice: keep Larry Hama on board at all costs!

Jane Foster, Valkyrie And Namor To Join The Avengers?