If you haven't yet heard of Population: One, you might want to peek your head out and get it into a headset, because it's the VR Battle Royale that's shooting to score. Today on August 5, its new Kingdom Age will begin, and the BigBoxVR staff was gracious enough to extend an invitation to Bleeding Cool with an early access demo before release. This means *spoiler alert* that we can assert with full honesty that the new castle zone is tons of fun! Matches here will be ending with sweaty tension, surprise ambushes, and bastion-holding glory, and it's just awesome.

The same update will also include a new Excalibur sword for melee-happy players, new skins, and lead into Population: One's new event-driven format of updating. Want to earn that new armored PJ?  Then play the upcoming event! And for those of us who prefer challenges over seasons, keep posted with BC as we continue covering the new update strategies behind Population: One.

So why is the new castle area so remarkable? Putting the Disney-vibe of its kingly building aside for one second, this zone doesn't deviate from the fact that historically, castles are defensible structures. The area is more than flavor, and laden with strategic hotspots. Population: One players know that this game allows climbing and gliding to the point that there are no vertical limits.  If you're storming its gates, and not sure where your adversaries are, you should feel a very real risk. Opponents could be watching you from any direction.  This region has nooks for days, and its rooms and houses contain both: loot, and perfect traps for ambushes.

Snipers and other shooters who are adept at a longer range will also have tons of higher-ground positions in areas that provide a wonderfully false sense of security. Imagine a VR Chivalry, but with a much wider arsenal, and the ability to climb anything and glide. It's a space where squads who how to communicate effectively and work together will have a massive advantage.

(Important media fact: the BC squad won two out of three matches in our demo with the BigBoxVR team.)

As for the newest Excalibur sword, it looks great and feels better. In VR, that last part is kind of a big deal. Swinging an Excalibur creates a white arc that lends flair, but also the sensation that a player is swinging something dangerous.  Excalibur is also a case where VR physics chime in.  Want to do more damage? Then, simply swing harder.

However, there is one con to this new item — it's worth pointing out that the sword has the strategic drawback of still being a sword. Without any ability to block bullets, Excalibur-wielders are choosing a VR blade in a VR gunfight.  In one example during my demo, there was a moment where an enemy was running in with some clear stabby-stabbing intentions, but, this author already had a shotgun. It worked out exactly as you're imagining.

In the end, the new zone is something that players will have to explore to fully appreciate. Its flavor combined with a functionally fun and novel environment. And whatever tactics players should use in this game's farmlands won't live up to the same effective standard during castle-storming.

Bleeding Cool also got ahold of a couple of key devs behind Population: One and, with a little correspondence, we confirmed that their juice is more than worth the squeeze.  We'll be posting that soon. In the meantime, for players who want a sign that BigBoxVR is an active development team that's going to continually polish their games and fosters a bigger community (as if the above isn't enough) check this out: if you're a new player, go get yourself 10 bucks worth of free Bureau Gold by using "BLEEDINGCOOL" as a coupon code in the in-game store. This freebie is good for players who have just installed the game until August 17th. And if you haven't checked out this game, you can get a copy here. 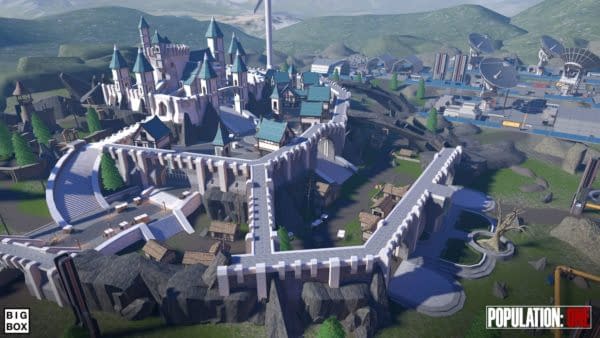 Review by Eric Hillery
9.5/10
Switching away from "Seasons", Population: One aims to release events and functional flavor in its continued development. It doesn't miss, either. Check out our review and BC coupon code for some free Bureau Gold.

We've covered Marvel Strike Force before, but this is going to reveal a bit about the darker side of business ethics in gaming.

If you haven't heard of the VR Summer and Winter Games, that's because it's still a new (but growing) event.

If you haven't yet heard of Population: One, you might want to peek your head out and get it into a headset.

Sensorium Galaxy Brings A Second Metaverse To VR & Beyond

We take a sneak peek at PRISM, Sensorium Galaxy's upcoming metaverse offering itself as a VR tool towards serenity and mindfulness.

Resolution Games released another potential sleeper hit with Demeo in VR, and it's got players talking. About in-game concerns, spells

Population: One Season 2 Releases On May 13. You'll Want Shells

Population: One, a title that already made our Best VR Wishlist Games of 2020, releases its Season 2 updates tomorrow, May 13th.

Blizzard Entertainment is continuing the Burning Crusade content in World Of Warcraft Classic as players can now head to The Black Temple.

Koei Tecmo released a new video this week for Atelier Sophie 2: The Alchemist of the Mysterious Dream, showing off the new battle system in the game.

Garena revealed this week that they will be bringing back the Free Fire Pro Series North America for full competition this Spring.

Rare and Xbox Game Studios launched a special 20-minute video today going over the plans for Sea Of Thieves over the next year.