Huesera, a Mexican folk-horror film by Michelle Garza Cervera, tells the story of  Valeria, who "has long dreamed about becoming a mother. After learning that she's pregnant, she expects to feel happy, yet something's off. Nightmarish visions and an unshakeable paranoia have her questioning what she wants, and an ancient evil spirit may be the cause." The film stars Alfonso Dosal as Valeria's husband, Raúl, and Natalia Solián as Valeria.

Huesera has an excellent cast, particularly with how it developed a springboard and foundational chemistry between Valeria and her husband Raúl before events started to unfold. The setup and exposition aren't thrown into dialogue in unnecessary ways like some horror films can find themselves doing. Instead, visuals and daily routine within the characters' lives help guide our understanding of what constitutes the norm of their lives, so we have a place to start from that is comforting and reassuring.

The changes into approaching motherhood mixed with body horror and the terrifying realism of pregnancy itself are what make Huesera a fantastic yet gut-churning film. The guttural sounds of bones cracking, a mixture of musical tones, and shifts between eerie silence and pure panic are incredibly compelling. Huesera works into the film an impressive showcase of the physical, mental, and emotional horrors of pregnancy within the realm of Spanish folk horror. Some really interesting shots take place during tense scenes, such as through mirrors, above the tub in the apartment, and viewing the process of checking on the fetus through the sonogram.

There's a truly important factor in Huesera, the intersections that can occur between culture and identity. What impacts some within the LGBTQ+ community differs from one culture and/or environment (country, region, etc.) compared to another. The transition from one scene depicting Valeria's past as she runs with friends shouting, "I don't like domestication!" to another scene in the present as she sits in a towel in the nursery provides an important perspective on how thin the lines between freedom in choice and an unfair obligation can be.

Seeing the one piece of art that pops up combining the imagery of Jesus Christ's crucifixion and the uterus reminded me of a recent exhibition that was at The Memorial Art Gallery in Rochester, NY, of artwork (specifically prints) in Chitra Ganesh: Sultana's Dream. Similar to that artwork in Huesera, the recently closed exhibit in that art gallery produces a discussion on gender-based inequality and visions of the future. There's joy in Valeria's eyes and calm when she's around that imagery or people she's known from her past is incredibly important and works really well alongside or in comparison to the scenes from her life with Raúl and the pregnancy.

I am beyond all thrilled to be repping HUESERA by first-time feature writer/director @mgarzacervera as it heads to @Tribeca's Midnight block for its World Premiere. Without coming on too strong, can I say this anxiety-inducing Mexican pregnancy horror is destined to be a hit 🤰🕷️ pic.twitter.com/zhVjCA4Bom

The consistency of tension and the feeling of being on edge and filled with dread were placed very well within the entirety of Huesera. Many actions and small details signal important shifts in mood during the whole film, making it a complex yet incredibly smooth watching experience. It hurts the heart watching Valerie go through what she goes through, and obviously frightening at the same time. Still, it feels necessary to examine how pregnant individuals can become like oblivious children in the eyes of loved ones sometimes. Huesera is a folk-horror film that touches on some heavy topics within pregnancy, Spanish culture, and much more. It's brutal yet necessary, making it a high-quality story and a terror-filled journey. The film premiered on June 9th, 2022, at Tribeca Film Festival's Midnight selections. 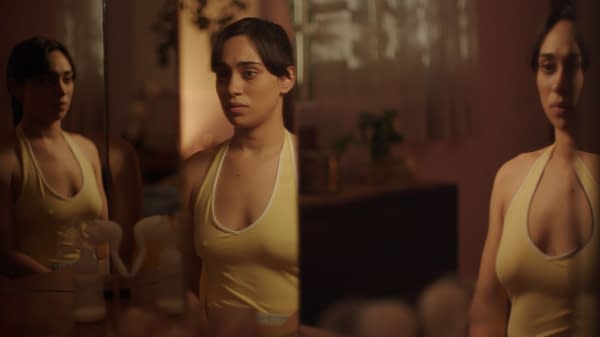 Netflix is running their TUDUM event, and the full trailer for Enola Holmes 2 was part of the event. It hits the streamer on November 4th.